Minnesota allowed two goals in the second period to fall 5-2 to the Huskies. 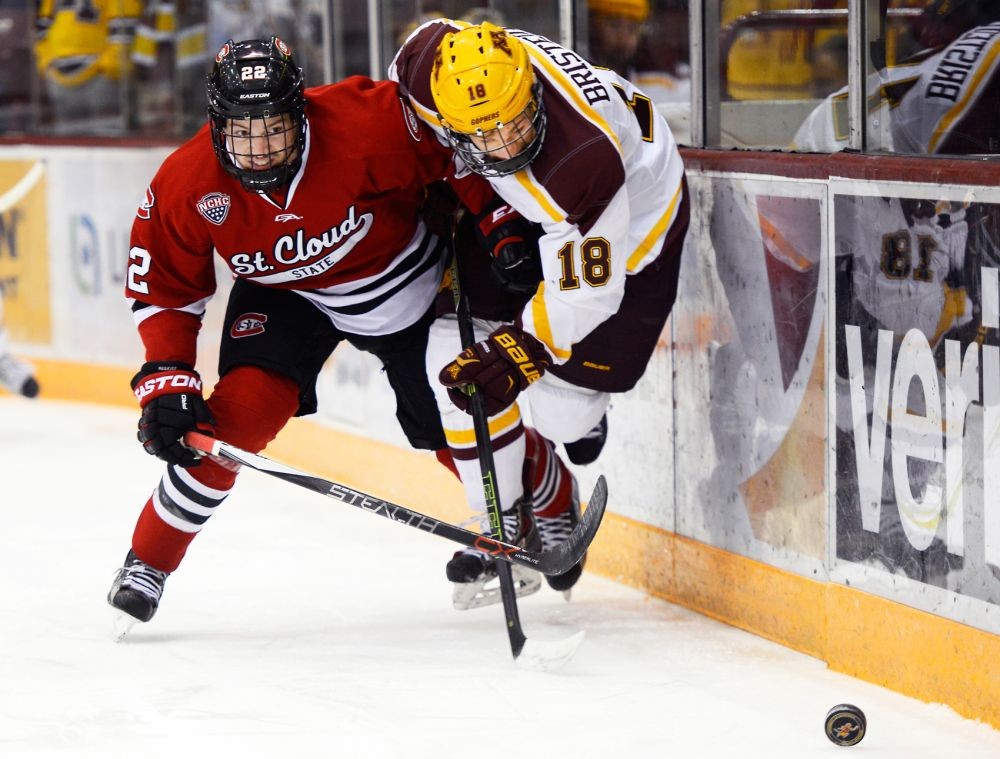 The Huskies showed throughout the game why they are the No. 1 team in the country, as the Gophers could not pull off the road upset.

“They were the best team we’ve seen this year,” head coach Don Lucia said. “We’ve played some of the top teams, but I think what separates them is the depth, four lines of guys who can make plays and are a threat offensively.”

Minnesota scored first, but saw four unanswered goals from St. Cloud State, including one quick score at both the start of the second and third periods. Minnesota got a goal back when forward Brent Gates Jr. tipped in a shot from defensemen Steve Johnson, which cut the lead to 4-2. The Huskies shut the door quickly after that, however, when St. Cloud State’s Jack Ahcan scored a rebound goal.

Beyond the initial stages of the game, Minnesota’s offense never found its stride, and was held to the team’s opening goal from forward Mike Szmatula until the third period.

“[Our line] had a good start,” Gates Jr. said, who also assisted on Szmatula’s game-opening goal. “We scored a goal quick, and then it went away for a bit.”

The Gophers scored the two goals, and never had the lead beyond their opening tally. Minnesota was set to welcome back two of its most impactful players, forward Casey Mittelstadt and defenseman Ryan Lindgren. Unfortunately for the Gophers, though, the players returned Saturday afternoon from the World Junior’s Championship in Buffalo, New York without their equipment. The mishap kept the players from seeing the ice Saturday.

Beyond Mittelstadt and Lindgren’s absences, Minnesota’s second highest-scoring player, forward Tommy Novak, was out with an injury, and Lucia said he will not be back for Sunday’s game.

“The lines were juggled a bit with our forwards,” captain Tyler Sheehy said. “The three guys that were out were really great players, but you’ve got to come together as a team and ultimately find a way to win. It hurts, but at the same time we’ve got to find a way to win.”

Minnesota went 0-4 on the power play Saturday, which adds onto the totals from their previous four games to be 0-23 in the last five games with the extra man.

Minnesota gets a chance to even the weekend series Sunday in the finale at 3M Arena at Mariucci at 6 p.m.