Reports of sexual assault on campus increase, according to UMN report

Officials say increased awareness and resources are responsible for the uptick. 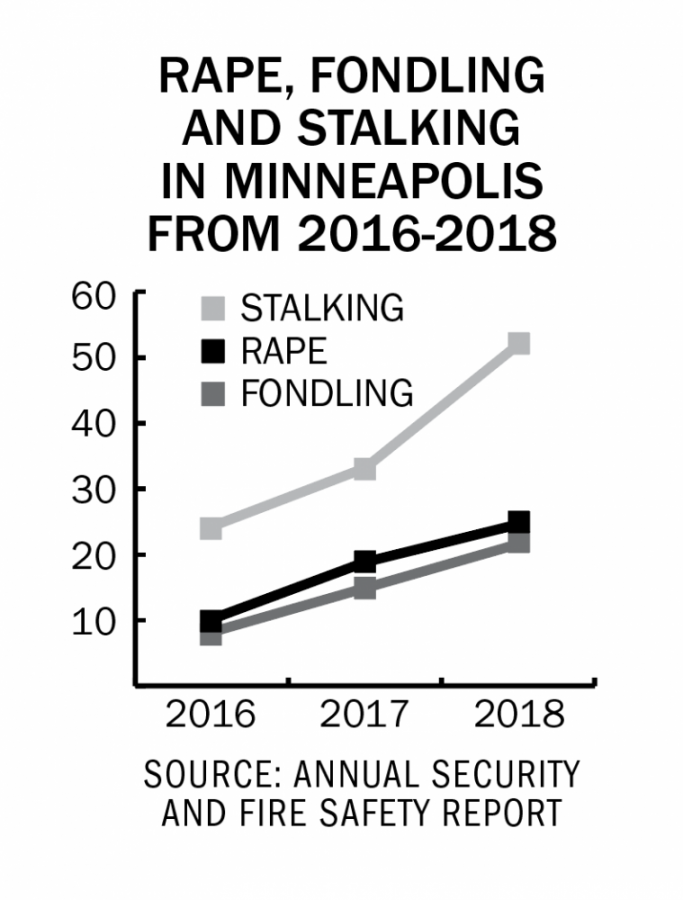 The number of reports for crimes like rape, fondling and burglaries on campus have increased over the last three years, according to a University of Minnesota report released late last month. Many attribute the rises in sexual assault reports to increased awareness and resources.

Every year, the Security and Fire Safety Report is released in compliance with the Clery Act. The federal statute mandates any college or university receiving federal funding to release crime statistics and timely warnings of threats to public safety on campus.

In 2018, the Minnesota Student Association launched the “It Ends Here” campaign as part of a larger effort in collaboration with former University President Eric Kaler.

The campaign aimed to raise awareness about “how to support victim-survivors and how to be a stronger ally when someone discloses their situation to a loved one,” said Gurtaran Johal, MSA Sexual Assault Task Force chair, in an email.

UMPD also adopted medical amnesty in 2018, a policy that prohibits police officers from citing sexual assault reporters for underage drinking or drug use. The Minneapolis Police Department adopted a similar policy in January.

Katie Eichele, director of the Aurora Center for Advocacy and Education, said the center has seen about a 50 percent increase in new clients over the past couple of years, but the number of reported incidents is less than the number of sexual assaults actually occurring.

“Not only have we seen an increase in burglaries, we’ve also seen about a 50 percent increase in trespassing,” said UMPD Chief Matt Clark. “One of our important initiatives is to have full-time security in the buildings after hours, to make sure once the buildings are closed individuals leave that aren’t part of the campus community.”

The department has seen about a 50 percent increase in trespassing over the same time period alongside the increase in burglaries. The University’s efforts to staff full-time security in its buildings after hours can help prevent these incidents, Clark said.

Alberts stated the report records crimes by year reported, not the year that crimes occur. Allegations are included whether or not an arrest took place.

Data is compiled through information provided by the University of Minnesota Police Department, local law enforcement and independent reporters.

“We want people to look at and digest these statistics,” Alberts said. “The report has got a lot of really good resources for current and prospective students and employees.”