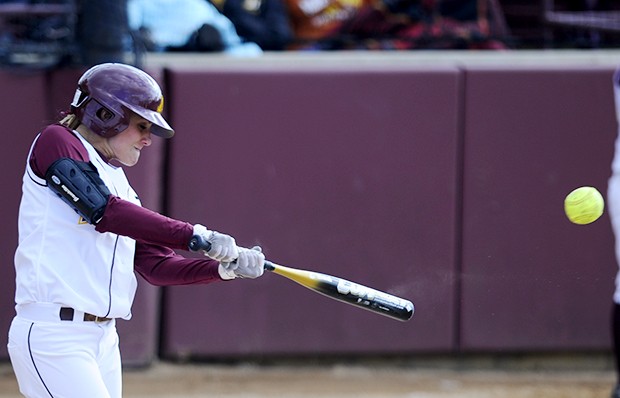 Two of the best pitchers in Big Ten softball faced off Wednesday afternoon in a double-header between Minnesota and No. 6 Northwestern in Jane Sage Cowles Stadium. Wildcats junior pitcher Lauren Delaney quieted the Gophers offense in the first game for a 6-1 win, but Minnesota senior hurler Briana Hassett rallied in the nightcap for an 8-3 victory over the top team in the conference to give Northwestern its first conference loss this season. âÄúI think itâÄôs huge and itâÄôs great for our mojo,âÄù Gophers co-head coach Lisa Bernstein said. Coming into the game, Gophers senior pitcher Briana Hassett was only three strikeouts from breaking MinnesotaâÄôs all-time record for strikeouts in a season. It took Hassett only one inning to tie the record, fanning NorthwesternâÄôs Adrienne Monka for the final out in the first. Then with one out in the second on a pitch gracing the inside corner, Hassett struck out Wildcats catcher Erin Dyer to break the record with 312 strikeouts on the season. âÄúShe shutting them down,âÄù Bernstein said of HassettâÄôs recent success. âÄúIâÄôm real proud of her.âÄù In the third inning, both Northwestern (23-8 overall, 9-1 Big Ten) and Minnesota (21-22, 4-4) put their first runs on the board. While Dyer was HassettâÄôs strikeout victim in the second inning to claim the record, NorthwesternâÄôs catcher got her revenge in the fourth inning with a deep home run to left field to give the Wildcats a 3-1 lead. The Gophers did not answer NorthwesternâÄôs home run, and in the top of the seventh the Wildcats offense exploded for three runs on three hits. Similar to DyerâÄôs home run, the batter Hassett struck out to tie the record got her payback later in the game as Monka drove in two runs with a single to expand the lead to 6-1. Hassett gained national recognition this season for her strikeout total and picked up 11 more strikeouts in the first game, but Northwestern pitcher Lauren Delaney proved why she was the 2008 Big Ten Pitcher of the Year with no earned runs in seven innings to start the double-header. Including the first game on Wednesday, Delaney has won 12-straight games to lead to 12-straight Wildcats wins. Delaney again started the second game, but did not continue her winning streak as the junior left after three innings, surrendering a 2-1 lead during that time. âÄúI know sheâÄôs a really good pitcher,âÄù Hassett said. âÄúBut we were excited to go out there and show them what weâÄôve got.âÄù Replaced by Northwestern sophomore pitcher Jessica Smith, the Wildcats backup pitcher allowed Minnesota to score two quick runs in the fourth on wild pitches. The Gophers made it a 6-1 the next inning on a two-run single by junior Tina Watts, forcing Northwestern to put Delaney back into the game. But Delaney (22-7) continued the WildcatsâÄô erratic pitching by allowing two more Gophers runners to score on wild pitches, finishing with six walks and the loss. âÄúBetween games I told them that weâÄôre going to win the second game,âÄù Bernstein said. âÄúPeople just stepped up.âÄù Hassett (20-15) finished with 18 strikeouts in the double-header, and surrendered only two earned runs to the top offensive team in the conference in game two to get the win. âÄúIt just gives our team so much confidence to build off of,âÄù Hassett said.