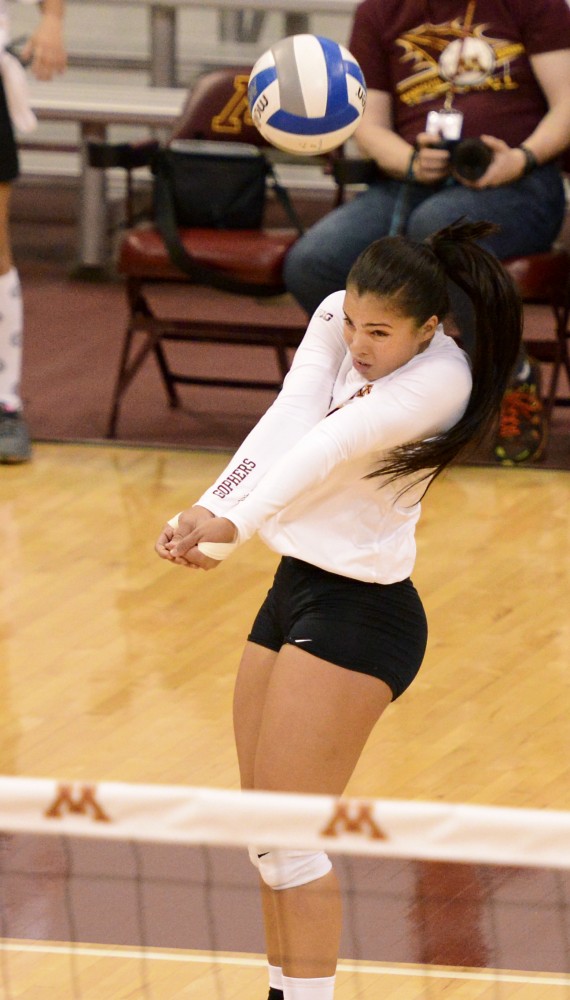 Minnesota sophomore Dalianliz Rosado bumps the ball back to North Dakota State University on Sept. 12 at the Sports Pavilion.

With a disappointing split series to begin the season the Gophers found victory in unfamiliar territory over the weekend.

“To come down to Puerto Rico and get a couple quality wins was great,” head coach Hugh McCutcheon said. “We were very happy with the resultsbut, more importantly, happy with the way we performed.”

Minnesota came out strong in its first set against Texas A&M. The Gophers led the Aggies for the entire set and outhit their opponent .333 to .037.

Junior libero Dalianliz Rosado tallied an ace in the set, and the Gophers had their best attack of the nightwith 14 team kills to the Aggies’ nine.

The second set proved to be more of a challenge for both sides as both teams battled to an 11-11 tie early on.

Back-to-back kills and a block from Minnesota pulled the Gophers ahead 14-11, but the Aggies later went on a five-point run to cut Minnesota’s advantage to 23-21.

A Gophers timeout stifled the Aggies’ momentum, and an attack error forced a 25-23 Minnesota win.

Two early aces from freshman outside hitter Alexis Hart and sophomore setter Samantha Seliger-Swenson, helped Minnesota jump out to an early lead in the third set.

The Aggies came close by pushing the score 22-18, but one kill from senior outside hitter Sarah Wilhite and two from senior middle blocker Hannah Tapp ended the set in Minnesota’s favor.

The Gophers’ next opponent was the Florida State Seminoles, a team coming off of two close victories against Texas A&M and Alabama.

Minnesota fell to an early deficit in the first set and trailed 10-9, but a 13-point run helped to lift the Gophers out from the trenches to win the set 25-14.

Florida State fought back in the second set and tied the score at 24-24, but kills from Wilhite and Hart led Minnesota to a close 26-24 victory.

The Gophers trailed the Seminoles for most of the third set and couldn’t forge a comeback. Florida State spoiled another Minnesota sweep 25-21.

Minnesota came back full force in the fourth set to hit a weekend-best .455 and defeat Florida State 25-12.

Hannah Tapp led the Gophers in the second match and hit .615 while Wilhite registered 34 kills on the weekend.

“We worried more about our side and our energy,” Wilhite said. “Not so much worrying or waiting to see what the other team would do.

The experience of playing in San Juan, Puerto Rico was unique for most of the Gophers but was extra special for Rosado.

The Morovis, Puerto Rico native grew up just over 45 minutes outside of San Juan. Rosado was excited to share her roots with her teammates and play in front of family and friends.

“It was amazing to play here with my team and to win with their support here,” Rosado said.