The junior stayed in a hospital after the team’s game at Ohio State on Saturday. 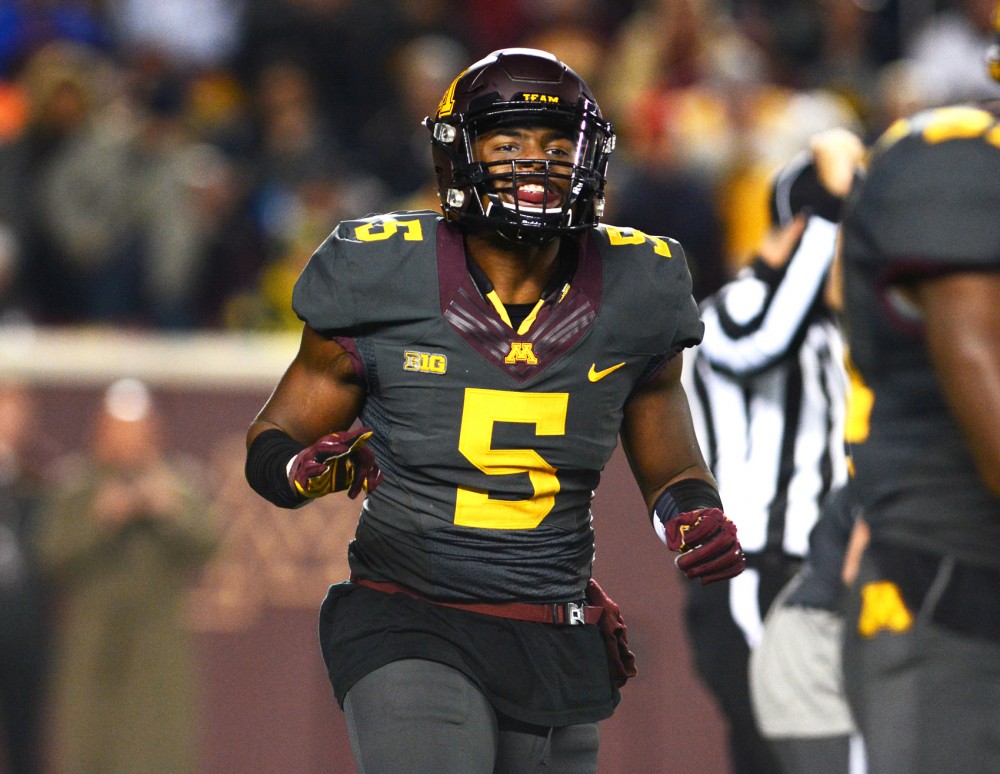 Defensive back Jalen Myrick at TCF Bank Stadium on Oct. 31 2015, where the Gophers took on Michigan.

Ryan Falk
One player stayed behind after the Gophers loss on Saturday to Ohio State.
Junior cornerback Jalen Myrick was hospitalized with rib and lung injuries after the game. He didn’t make his way back to Minnesota until Tuesday, interim head coach Tracy Claeys said.
Myrick will likely need three to four weeks to heal and might be done for the season, Claeys said.
Myrick leads the Gophers with three interceptions on the season and has returned 12 kickoffs this year, the most on the team.
Minnesota’s secondary has already dealt with plenty of injuries this season, as senior safety Damarius Travis was injured in the team’s first game against Texas Christian
University and hasn’t played since. Redshirt senior cornerback Briean Boddy-Calhoun also missed two games this season.
“It’s been a weird season as far as that goes,” Claeys said. “But at the same time, our kids, they have answered the bell, haven’t used it as excuses [and] continue to compete.”
Freshman cornerback KiAnte Hardin replaced Myrick in the game after his injury. Hardin has made six tackles on the year.
Gophers ground game struggles
The Gophers rushing attack has struggled in their past three games, all of them losses.
Minnesota has not had a 100-yard rusher since freshman running back Shannon Brooks had 176 yards against Purdue.
The Gophers rushed for a season-low 33 yards against Ohio State.
Minnesota has become more reliant on its passing game, while the running game has struggled, throwing over 30 times in the last three games.
Most of those throws have been shorter to help get redshirt junior quarterback Mitch Leidner in a groove and have served as the de facto running game for the team.
“A lot of our short passing game, you have to mentally say, it’s as good as a run,” offensive coordinator Matt Limegrover said.
The Gophers passing game has been productive recently, as Leidner has thrown for 899 yards in his last three games.
Minnesota is also getting players like senior wide receiver KJ Maye and sophomore tight end Brandon Lingen more involved on offense.
“Yeah, we’d like to run the ball better,” Limegrover said. “But at the same time, with what Mitch is doing right now, guys like KJ Maye, Brandon Lingen, they’re opening up some other opportunities in other areas.”
Both of the Gophers primary running backs, Brooks and redshirt freshman Rodney Smith, are dealing with injuries, so senior running back Rodrick Williams Jr. saw extra snaps against the Buckeyes.
Williams Jr. hasn’t had much playing time this season, with only rushing attempts 29 times for 93 yards, but he may be called on for a bigger role when the Gophers
face No. 8 Iowa this weekend.
“Yeah, [Williams] hasn’t got the carries he’s wanted, but he’s gotten to play,” Claeys said. “Being a senior, he’ll be prepared and ready to go. I think he’ll do a great job if we have to call on him.”
Delete Image
Align Left
Align Center
Align Right
Align Left
Align Center
Delete Heading