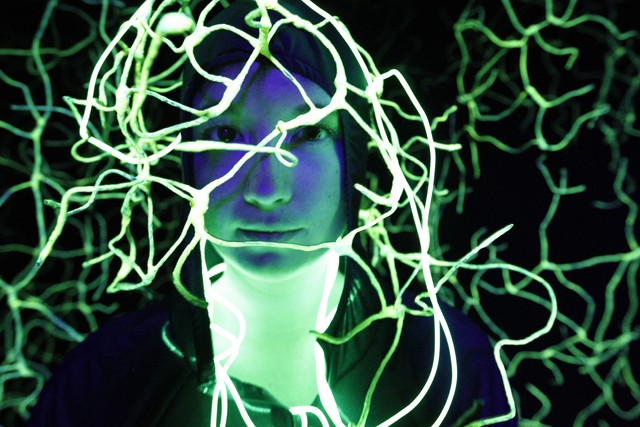 Cousin SallyâÄôs basement, with the mold, the rusty tools and the occasional draft that sounds like someone saying, âÄúIâÄôll get you, my pretty,âÄù is laughable when compared to this yearâÄôs Haunted Basement at The Soap Factory in St. Anthony Main.
As with every one of the past four Haunted Basements, volunteers and staff have been at work since March on some exhibits, making sure that its patrons will get their $20-worth of terror.
One of these exhibits, described only as âÄúThe Bottle RoomâÄù incorporates hundreds of thousands of bottle caps. Though it sounds relatively tame for the project, itâÄôs overwhelming. ThereâÄôs an eeriness capable of being achieved solely by The Soap, and they reinvent cerebral horror for this conceptual piece. Besides the four walls they covered, the room is also slated to have particularly elaborate costumes for the actors.
The costumes have been carefully designed to make anyoneâÄôs worst nightmares come to life. Instead of creating depictions of horror entirely on their own, the rooms are put together first, and the costumes are handmade to bring out the worst in their environment. Rather than a consistent actor with a predictable costume, each night hosts different interpretations of the room and draws from various actorsâÄô personal experiences with their environment.
âÄú[Our] artists are great at taking emotional, psychological phenomena and translating them into the physical world,âÄù project lead Gabe Shapiro said. âÄúOur philosophy is pretty basic âÄî less simplistic shocks (like jumping out from behind a wall wearing a mask) and more real psychological terror âÄ¦ We push it right up to the limit where maybe for a split second they actually believe something horrible could happen to them down there. Then, of course, it never does, and they leave feeling elated, because theyâÄôve safely returned to the âÄòreal worldâÄô.âÄù
The Basement made two men vomit last year, a phenomena attributed to the nasty smells that the coordinators incorporate in addition to the terrifying atmosphere.
âÄúThey both made it all the way through the basement, found a peaceful place outside and let it out,âÄù coordinator Liseli Polivka said. âÄúWe work closely with the Nasal Rangers from the St. Croix Sensory who deliver some pretty potent smells for the project.âÄù
Due to the obsessive attention paid to petrifying their visitors, the creators have made sure to include a waiver for all who dare to participate. It must be signed before entering, adding to the psychological torment even when standing outside the rooms themselves.
âÄúWell, we have never had anyone die, and no oneâÄôs ever been seriously injured,âÄù Egner said. Due to the terrifying nature of the exhibits, though, as well as the age of the building itself, âÄú[The Soap Factory] want[s] to make sure that people know exactly what theyâÄôre getting into. It also does, of course, help with creeping them out a little bit.âÄù
Heart monitors and puke bags will not be provided.