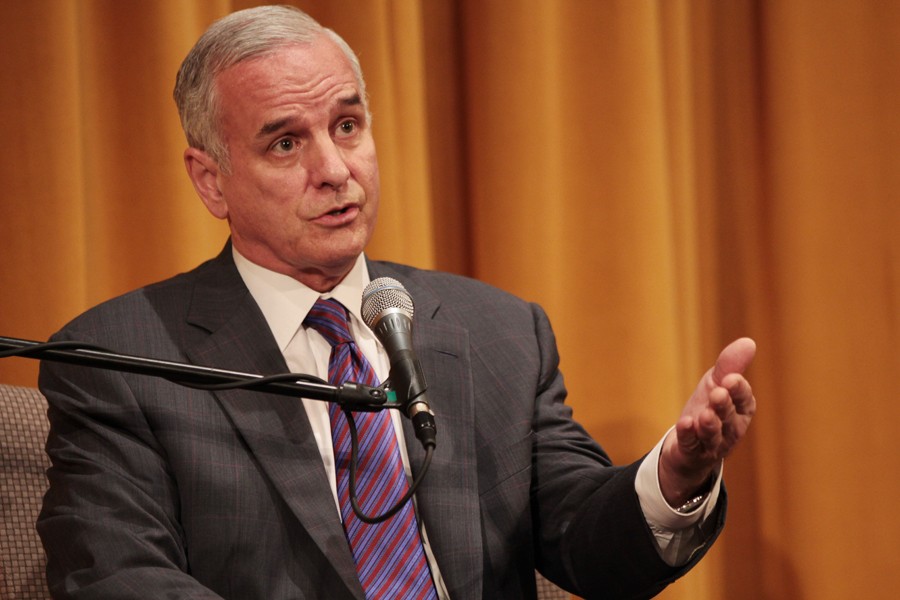 Gov. Mark Dayton speaks about the government shutdown Thursday at the Humphrey School.

Gov. Mark Dayton and Republican leaders announced Thursday evening that they had agreed to a budget framework to end the state government shutdown.

Standing in front of a crowd at the Capitol at about 5 p.m., Senate Majority Leader Amy Koch, R-Buffalo, and House Speaker Kurt Zellers, R-Maple Grove, and the governor announced the news of their deal with an air of disappointment.

âÄúThis is an agreement that is very difficult for both sides,âÄù Koch said after more than three hours of negotiations inside DaytonâÄôs office.

The budget framework would spend more than the $34.2 billion Republicans had insisted on, and does not include any of the tax increases on wealthy Minnesotans that Dayton had pushed for since the Legislature convened in January.

Despite their solemn tone, both Zellers and Koch expressed their belief that the Republican members of their respective chambers would approve the budget agreement.

The two parties promised to spend the weekend ironing out the budgetâÄôs details to put a resolution âÄúon the fast track,âÄù Dayton said

The agreement came roughly seven hours after Dayton announced he would accept a Republican proposal offered on June 30, hours before the state shutdown began. Dayton shocked local media with his announcement Thursday morning at a public forum held at the University of MinnesotaâÄôs Humphrey School of Public Affairs.

Dayton told the crowd of Humphrey fellows and media that he would be âÄúastonishedâÄù if Republican leaders didnâÄôt accept his offer.

In his letter sent to Zellers and Koch, Dayton wrote that although he has âÄúserious reservations about your plan âÄ¦ I am willing to agree to something I do not agree with âÄî your proposal âÄî in order to spare our citizens and our state from further damage.âÄù

A delay in payments to K-12 schools to free up $700 million.
Issuing âÄútobacco bondsâÄù to create more revenue.
An additional $10 million for the University of Minnesota
A restoration of funding for the Department of Human Rights and Trade Office.

Dayton added three conditions to accept the offer: Dropping controversial policy issues, like restrictions on stem cell research and abortion, and the proposal to cut 15 percent of state employees. He also requested the Legislature support a $500 million bonding bill.

âÄúIâÄôm disappointed we canâÄôt do it better,âÄù Dayton said. âÄúThere is still an opportunity for Republicans to improve it.âÄù

Immediate reactions to DaytonâÄôs announcement from rank and file legislators of both parties lukewarm.

“If GOP and Dayton agree on tobacco bonds and expanded school shift it will be the most irresponsible budget in state history,” Rep. Ryan Winkler, DFL-Golden Valley, posted on Twitter.

“I’m glad that Governor Dayton dropped his need for tax increases, but I don’t like shifting more money from K-12,” Rep. John Kriesel, R-Cottage Grove, wrote on his Twitter account. “We owe them $2 billion already.”

Missy Thompson, a former Humphrey School fellow who attended the forum, said the offer wasnâÄôt ideal, but Dayton had no other choice.

Speaking to reporters after the forum, Dayton seemed to give up any hope of raising taxes on the wealthiest Minnesotans, a way of raising revenue he had strongly supported during the legislative session.

âÄúThere arenâÄôt the votes there,âÄù Dayton said. âÄúRepublicans are intractable and adamant that they wonâÄôt vote for a tax increase. As hard as it is for me to understand their logic, itâÄôs reality. And thatâÄôs not going to change as long as theyâÄôre the majority in the Legislature.âÄù