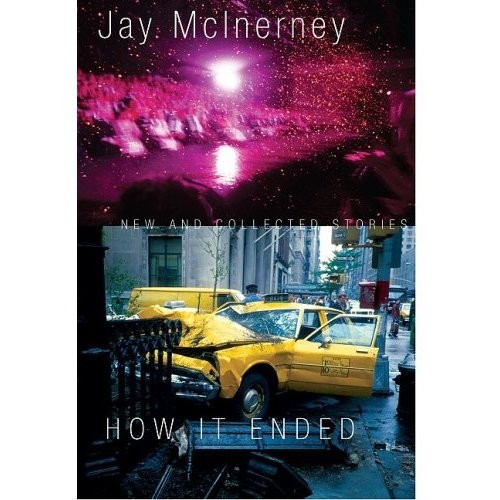 âÄúHow it Ended: New & Collected StoriesâÄù AUTHOR: Jay McInerney PAGES: 331 PRICE: $25.95 Jay McInerney was an âÄô80s literary wunderkind after the publishing of his first novel, âÄúBright Lights, Big CityâÄù (one of TIME MagazineâÄôs most influential books of the 20th century). He spent a lot of time in New York City clubs during that hedonistic era with his pal Bret Easton Ellis . Together, they indulged in what they called âÄúBolivian Marching Powder,âÄù (read: cocaine), hung out with hot chicks and churned out books all the while, becoming the New Guard in the âÄô80s book scene. His glam debauchery and fast-paced writing style are likely what earned the now 54-year-old a spot on âÄúGossip Girl,âÄù where he plays DanâÄôs hard-drinking, flaky author mentor. Between âÄúGossipâÄù guest spots and jaunts as a wine critic, McInerney found time to revisit a selection of short stories written throughout his career with the release of âÄúHow it Ended,âÄù a 26-story collection. The book begins with âÄúItâÄôs Six A.M. Do You Know Where You Are?âÄù (written in 1982), the short story that would become âÄúBright Lights,âÄù while âÄúStory of My Life,âÄù originally published in âÄúEsquire,âÄù also became its own novel. âÄúStory of My LifeâÄù (1987) focuses on the beautiful, dysfunctional and wealthy Alison Poole and her circle of fabulous friends with coke problems. During the John Edwards affair scandal last year, it was discovered that McInerney had based Ms. Poole on his real-life acquaintance, the Rielle Hunter with whom Edwards was carrying on an affair. McInerney, perhaps eager to capitalize on that turn of events, revisits Poole (who also appeared in two Bret Easton Ellis books) again in âÄúHow it EndedâÄù with the story âÄúPenelope on the Pond.âÄù In it, Alison languishes in a mountain cabin as a presidential candidateâÄôs mistress. Clever. McInerney revisits some of his other characters, like the Calloways from âÄúBrightness Falls,âÄù as they try to give up 20-plus years of smoking in âÄúSmoke.âÄù Often, characters end within the confines of their novels, but McInerney reuses his favorites to update his readers on their lives. Most of the characters in âÄúHow it EndedâÄù are dealing with infidelity, addictions and troubled marriages. TheyâÄôre the things one can encounter later on in life, but McInerny makes them accessible to a 20-something reader by writing with an intellectual wit that is imagery-filled rather than high-reaching or esoteric. McInerney is notable for his flexible, modern writing style that jumps from first-person to third-person and inhabits both male and female perspectives with comfort. McInerneyâÄôs honest observations hit their stride in the disenchanted voice of a middle-aged man. McInerney is a great capturer of all time periods and trends. Sure, he might write more amusingly about his âÄô80s heyday, but he casts a prying eye into our modern times, too. HeâÄôs always been, like his partyboy compadre Ellis, a sort of debauched Edith Wharton or F. Scott Fitzgerald , sending up society in a wry but spot-on and smart manner.