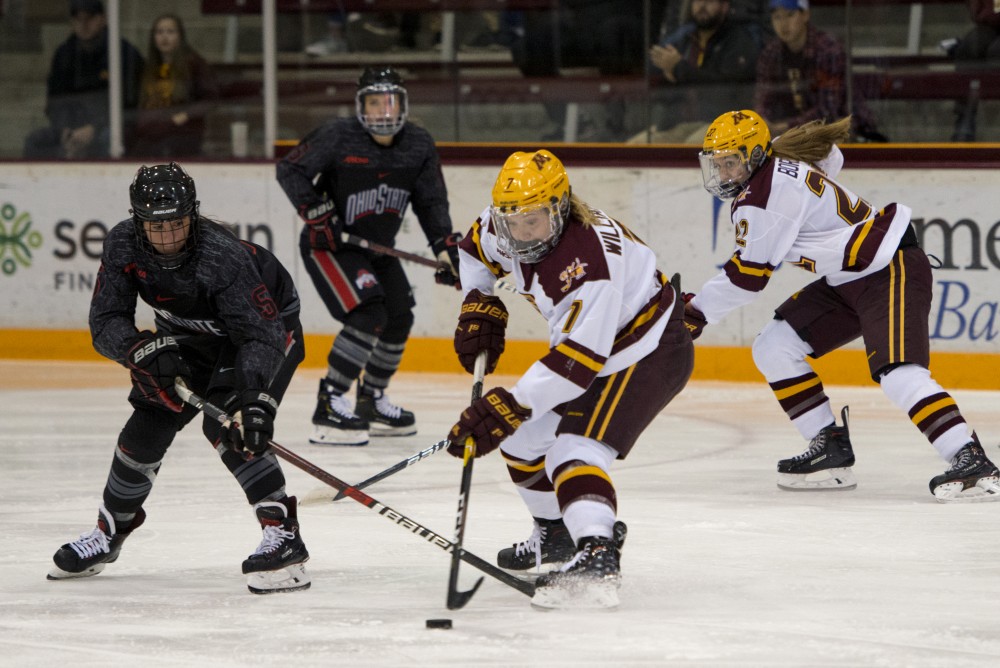 Missed opportunities and unlucky bounces came back to haunt the Gophers.

The Gophers split the weekend series with Ohio State with a 3-0 victory on Friday and a 3-2 loss on Saturday.

Head coach Brad Frost said he was proud of Minnesota’s effort on Saturday.

“It’s not the result that we wanted,” Frost said. “We played a good hockey game. Unfortunately, it wasn’t meant to be tonight. We’ll learn from it and move on.”

Ohio State right winger Madison Field scored the game-winning goal at 4:44 of the third period. Field’s goal gave Ohio State a 3-1 lead. It was her fourth goal of the season.

Left winger Nicole Schammel and right winger Taylor Williamson scored for Minnesota. Schammel scored at 13:21 of the first period to tie the game at one. After right winger Grace Zumwinkle shot the puck wide of the net, Schammel collected the puck near the blue line and skated towards the slot. She deked past an Ohio State defender before beating Ohio State goaltender Andrea Braendli with a wrist shot. It was Schammel’s third goal of the season.

Schammel said she felt fortunate the Buckeyes gave her an opportunity to shoot.

“I saw an open lane, so I took it,” Schammel said. “They were standing still. I got lucky, but I just took a chance on it and [it] worked out.”

Williamson scored her third goal of the weekend at 17:28 of the third period to cut Ohio State’s lead to 3-2. Minnesota pulled Scobee with less than two minutes remaining for an extra attacker, but the Gophers could not find the equalizer.

“Their defense [was] good at keeping us out of the crease on rebounds,” she said. “You have to tip your cap to Ohio [State] for doing a good job at shutting us down in tight.”

Scobee said the Gophers need to score on more chances in the future. Four Minnesota shots hit the goalpost.

“We had so many opportunities,” Scobee said. “We dominated most of the game.”

Gulstene earned her first collegiate shutout as Minnesota defeated Ohio State 3-0. She stopped all 18 Buckeyes shots for her fourth win of the season.

Gulstene said she cried after the final horn.

“If I couldn’t have [earned] that shutout, who knows what the score would have been,” Gulstene said. “I was emotional. People were all full of joy. It was a team win and a team shutout.”

Williamson scored her first two goals of the season. Her goal at 11:12 of the first period held up as the game-winning tally.

The Gophers outshot the Buckeyes 47-18. Williamson said Minnesota’s back checking and puck possession made it difficult for Ohio State to sustain an offensive attack.

“When we do have a turnover, we’re hustling,” Williamson said. “All the forwards are getting back as fast as they can and marking off all those open players. Once we’re able to do that, then we can go back into the offensive zone and do our work.”

“It’s two fast teams, so there’s going to be more collisions,” he said. “The intensity that Ohio State brings forces you to bring the same amount of intensity. Our team was matching what they brought to the table.”

Frost said Minnesota didn’t have any glaring issues this weekend.

“I don’t think we did a lot of things that hurt us [on Saturday],” he said. “We need to continue to play the [same way] and try to bring it up another gear.”