While advocates have made progress, some students feel the University still isn't equipped to support their needs. 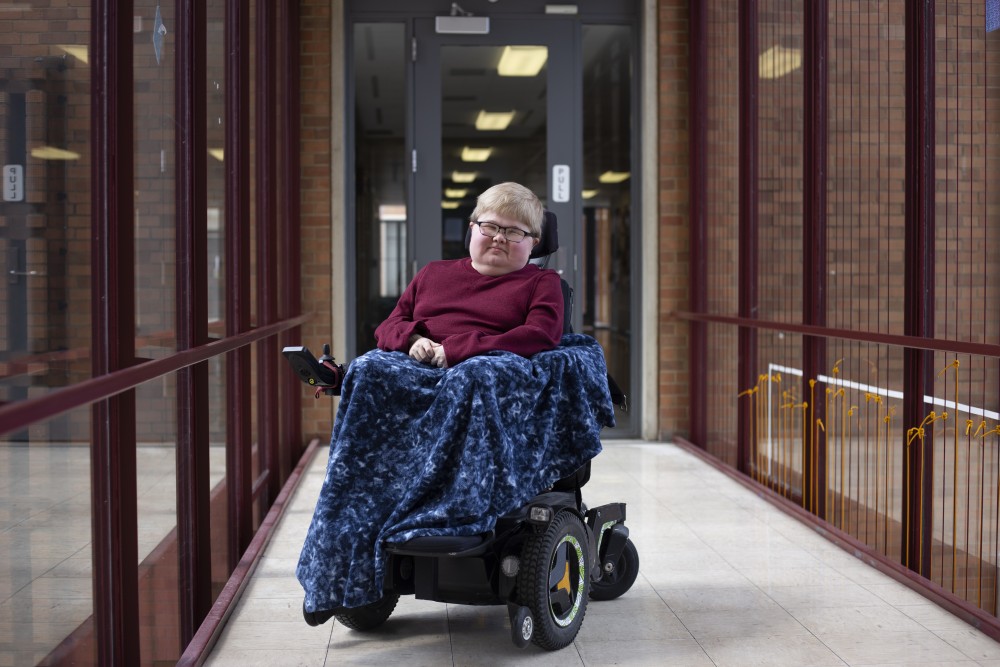 Geography undergraduate student Cole Anderson poses for a portrait in the skyway between Blegen Hall and the Social Sciences Building on Thursday, April 18. Anderson's geography classes are in Blegen Hall and his advisor's office is in the Social Sciences Building, but he can't use the skyway because there aren't automated push plates to open the doors.

Cole Anderson uses seven elevators to get from his apartment to his first class of the day.

He’s usually forced to wait to get in elevators because they’re too full —  often, he sees able-bodied people crowd in while people with mobility aids, like those with scooters or wheelchairs, are left waiting outside. Other times, he gets stuck between buildings, watching students use the single-person-wide ramp in the West Bank Skyway as a walkway.

“I very rarely call people out, because I don’t know if you have an invisible illness or something else that could prevent you from taking the stairs. But there’s so many times where I’m thinking, ‘Guys, what the heck, I’ve been waiting for 10 minutes,” Anderson said. An undergraduate studying geography, Anderson is a 20-year-old wheelchair user who transferred to the University of Minnesota from a college with specialized disability programs in Illinois. Now, he’s attempting to balance school, work and a personal life with finding and paying for personal care assistants, accessible housing and transportation.

Disability advocates throughout the University have discussed the lack of training for professors, physical accessibility issues and problems with campus culture. They’re making progress — a recent resolution aiming to mandate disability training for faculty was greenlighted by University of Minnesota Senate committee members last month.

But while the University is moving in the right direction, Anderson said issues are consistently present and can dissuade those seeking higher education. Programs at his previous school gave him a safety net as he jumped into college, but many schools don’t have that option.

“I love [college], I really do. It’s a lot of fun. And that’s why it’s so sad that it’s so hard and inaccessible for so many people,” Anderson said. “There are so many gifted, absolutely brilliant disabled people who … are completely left out.”

Anderson’s troubles with accessibility in campus buildings began during his transfer-student orientation.

After a day of having to find his own way through campus buildings or be left out of activities entirely, an orientation leader suggested their group eat lunch together in front of a building that only had steps. Anderson had to eat by himself to the side.

He said he’s frequently “expected” to know where to go when the route others take is inaccessible for him. Many buildings on campus are older and don’t have many disability accommodations, such as working elevators or bathrooms with push plates to automatically open doors, he said.

“The only reason it appears that people with disabilities [know where to go] is practice. We’re used to our needs not being met, and services aren’t going to be there. So three days ahead of time, [disabled people] take the entire route and try and memorize where to go,” Anderson said. Anderson also relies on personal care assistants throughout the day — without them, he wouldn’t be able to get out of bed, get lunch or use the bathroom. But unlike his last college, Anderson is responsible for finding and funding staff himself. After he transferred to the University, his parents moved in to his apartment; his mother currently serves as his main personal care assistant.

During his search for an apartment near campus, Anderson said he struggled with finding buildings that had accessible units. For him, that means roll-in showers, larger spaces and easy access to transportation. He lives in the only accessible unit in his building, he said, but still can’t get into his apartment due to the lack of a push plate. Ryan Machtmes, co-founder of the Organization for Graduate and Professional Students with Disabilities, said he’s discovered a “myriad” of accessibility problems as a student. The group recently received funding for three GPS-equipped GoPro cameras this year to document and catalog accessibility limitations throughout University buildings, which they plan to present to administration.

“It’s mandated that bathrooms have accessible stalls. But there are any number of bathrooms on campus that, even though they have those, are still completely inaccessible to students with mobility impairments because they can’t get through the door,” Machtmes said.

Construction on campus buildings has blocked wheelchair accessible doors, Gopher Way tunnels have steps but no ramps and rooms inside University buildings have no automatic doors, he said.

For Anderson, the constant frustrations add up.

“I need a lot of help, and when you’re starting out in college, that’s a really scary thing,” he said. “For a lot of freshmen, taking care of yourself is big enough, but having to manage staff, find funding, figure out a new place … it just sucks.”

Invisibile in the classroom

Sophie O’Rourke has given her fibromyalgia a nickname: Florence.

“Florence” is a woman living in her body who pulls at her nerves like cords. Sometimes, Florence breaks things. Some days, Sophie and Florence work in tandem, figuring out what the other needs to get by.

“We’re getting there. She causes more problems than she needs to, but I’m trying to appease her,” she said.

O’Rourke identifies as a student with an invisible, or non-apparent, disability. Fibromyalgia causes major fatigue and pain among other things, but Sophie said others don’t always realize the severity of her condition. While the nature of her disability allows her some privilege as a visibly able-bodied person, she said she’s often seen as lazy or faking it.

“People will give me really dirty looks when I take disability seating, to the point where I will pass out before I ask someone to give up their seat for me,” she said. “I hate having people question my disability just because they can’t see it.”

But while her professors give her accommodations because she’s registered with the Disability Resource Center, she says her classmates don’t always understand the reality of her disability. She’s been docked in peer evaluations for not showing up to group work despite informing her classmates she physically can’t get there.

“It’s not that I don’t take my work seriously … It’s because I feel like I’ve been shot or will throw up as soon as I step outside. It’s so much more than ‘Sophie’s not showing up to lab,’ but that’s all I’m reduced to,” she said.

While resources at the University are sometimes helpful, accommodations for things like testing need to be reserved so far ahead it’s difficult to keep up with, O’Rourke said. She said she has taken bad grades rather than try and figure out paperwork.

Asking for accommodations can also be awkward, she said. Explaining the things she struggles with makes her feel like she’s irritating or boring people, and she still runs the risk of having to conform to able-bodied standards anyway.

“It tends to be an overarching disability theme — instead of catering to the disabled, the disabled cater to the able-bodied life,” O’Rourke said. People with disabilities are still very present and active on campus despite institutional challenges, Anderson said.

Requests for disability services have risen across all five campuses, but the DRC still doesn’t have enough space to accommodate students for testing.

While a resolution on mandatory training for instructors — something that was previously optional — is making its way through the University Senate, many say the education needs to be expanded outside of faculty.

“The key is to teach people. … So much emphasis in our society is based on independence and individualism, and people who need help aren’t seen as valuable compared to people who don’t [need help],” Anderson said. “Just have respect.”

Instead of treating people with disabilities as inspirations or in need of pity, O’Rourke said she wishes able-bodied people had more compassion and understanding.

“I have way more resilience, empathy and understanding because of my disability. My disability doesn’t necessarily always take things. Yeah, sometimes it does, but it’s given me some really, really powerful insights and opportunities,” she said.

“We don’t need your pity, we need you to listen,” she said. “Our disabilities don’t need to be overcome.”