Women’s hockey: on fire on the ice

The Gophers sold out Ridder Arena on Saturday and won their 26th straight game Sunday. 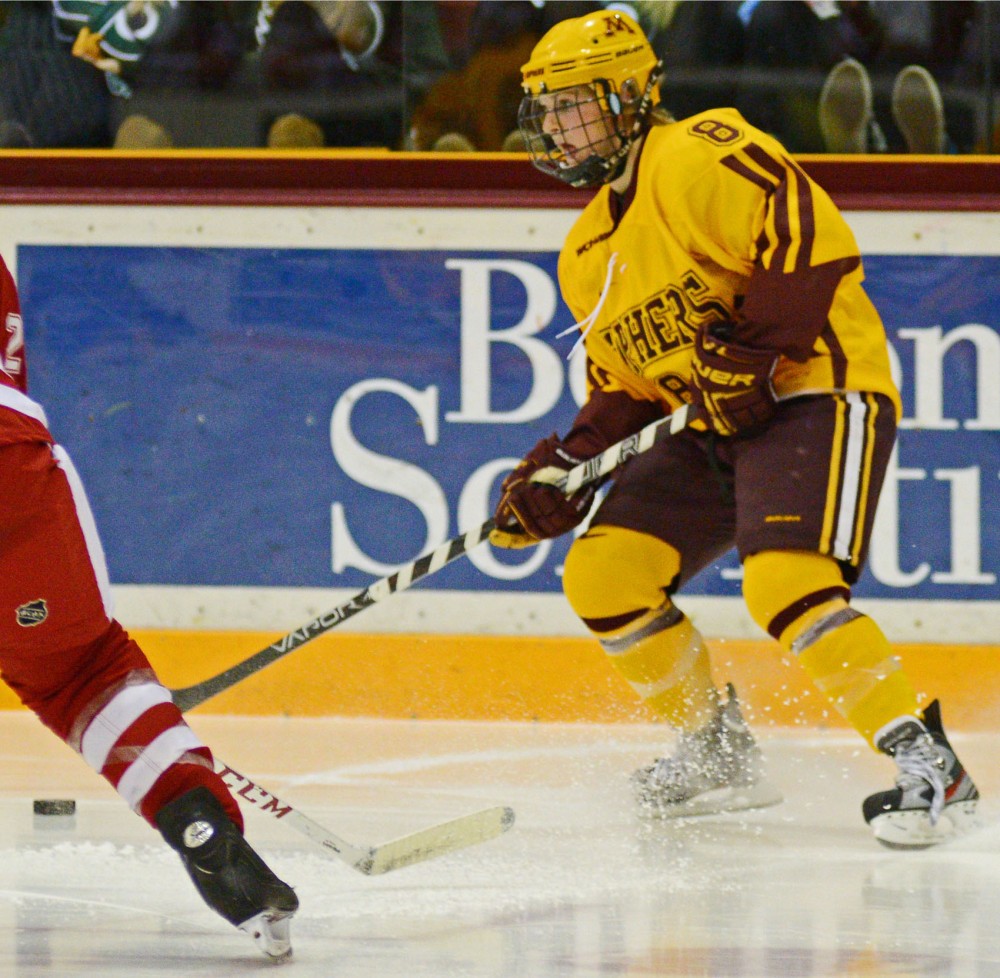 Minnesota hadn’t won a game by fewer than two goals all season. And it maintained that streak Sunday, defeating Wisconsin 2-0 to sweep the weekend series.

“I felt like our team knew that they were going to get that goal,” head coach Brad Frost said. “It was just a matter of how or when.”

On Saturday, they impressed the first-ever sellout crowd at Ridder Arena with a 4-1 win against the No. 10 Badgers.

Minnesota announced a crowd of 3,400 fans for the first meeting between the Gophers and Badgers since last year’s national championship game.

The two teams have a lengthy back-and-forth history, and this weekend was the first time Minnesota has swept Wisconsin since 2005.

Senior goaltender Noora RÃ¤ty said Sunday she was excited entering the weekend because she knew Wisconsin would be the Gophers’ toughest challenge of the year.

“And they definitely were,” she said.

Frost said the team hasn’t faced much adversity so far this year, but he thought Wisconsin provided some Sunday.

“It was great for our team, quite frankly, to be 0-0 after two [periods] and have to go into that third period finding a way to get the job done,” Frost said.

Wisconsin (10-6-2) outworked the Gophers in the first period Sunday.

“We don’t have enough skill to just out-skill teams,” Frost said. “We’ve got to outwork them, too.”

The Badgers outshot the Gophers 11-7, beat Minnesota in the faceoff circle 8-3 and made RÃ¤ty work hard to keep the Gophers in the game.

Frost said Minnesota allowed too many opportunities and committed too many penalties in the first period Sunday.

RÃ¤ty said she thought “some of the girls had tired legs” to start the game.

But as much as the first period belonged to Wisconsin, the second was Minnesota’s.

“They came out in the second and took charge of the game,” Frost said of his players.

The Gophers outshot Wisconsin 17-2 in the period, but Wisconsin goalie Alex Rigsby gave a tremendous effort to keep her team in the game.

Despite entering the third period tied, Jalosuo said Minnesota remained calm and confident that it would score.

Minnesota dominated the third period, too, and this time it paid off.

Jalosuo gave the Gophers the lead with a one-timer past Rigsby nine minutes into the third period on a power play.

“The way we played in the last two periods in particular, had we not won this game … I still would have been really proud of how we played,” Frost said.

RÃ¤ty recorded 19 saves Sunday for her seventh shutout of the season. She shined Saturday, too, as she’s done all season for the Gophers.

RÃ¤ty made an incredible save sprawled on the ice Saturday to preserve a scoreless tie in the second period.

“I was hoping she would get up and make a routine save,” Frost said, “but she’s more for the dramatic there, flashing the glove.”

She had made a save on the previous shot attempt and hadn’t gotten up by the time the rebound was fired in. She said Saturday she had made it hard for herself by not getting up quickly.

Minnesota’s offense exploded later in the period for four goals in less than 13 minutes, effectively sealing the win.

“That’s huge for us. It keeps us in the game and gives us momentum,” Kessel said Saturday of RÃ¤ty’s save. “It gives us confidence knowing that we’ve got a great goaltender behind us.”

Freshman forward Maryanne Menefee, who returned to the lineup after violating team rules and not dressing last week, gave Minnesota a lead 5:37 into the second period.

Kessel scored a goal less than five minutes later, and Sarah Davis made it 3-0 a little more than a minute later.

Davis has struggled to find the stat sheet this season, but she recorded two points Saturday and one Sunday.

“It’s just one of those seasons, I guess,” Davis said Saturday. “I just try to tell myself to keep working hard — eventually it’ll go in.”

“I know a couple of us had heavy legs,” she said.

The Gophers outshot the Badgers 14-8 in the first period, but Frost said he thought the period was somewhat choppy.

“We weren’t possessing the puck a whole lot,” he said Saturday. “We weren’t moving our feet the way we need to.”

Kessel said Saturday she thought the team used the puck better down low in the second period.

Ridder Arena was packed Saturday, and Davis said the team needs fan support like that every game.

She said it was the first time she had experienced the wave at Ridder.

“I wasn’t that focused [on] that shift because I was too caught up on the wave going around the arena,” Davis said.

The Gophers will close out the calendar year with two games at Bemidji State next weekend.