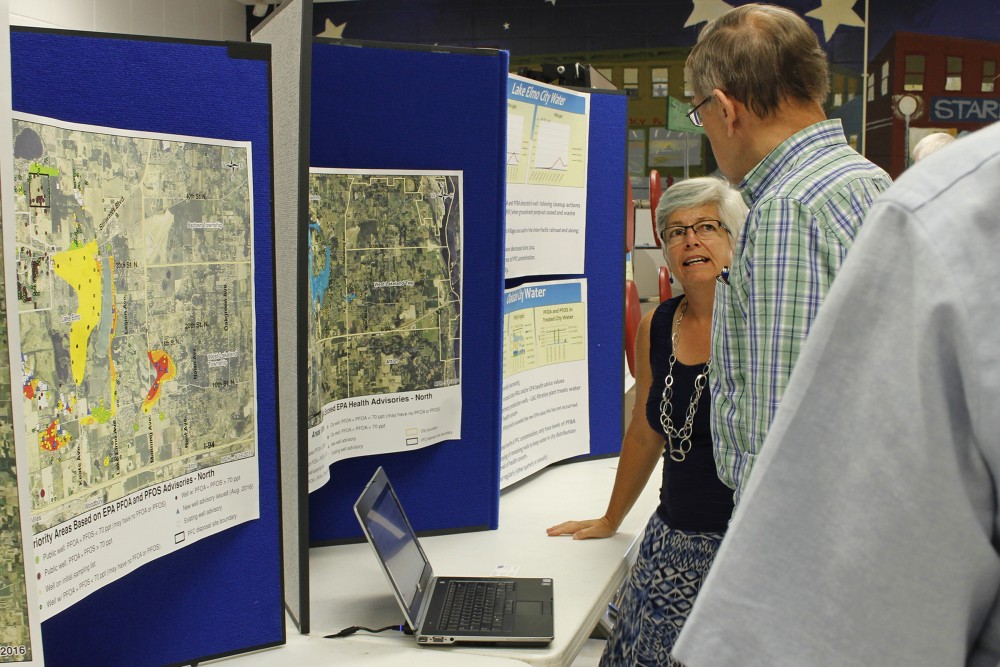 Hydrogeologist for the Minnesota Department of Health Virginia Yingling explains data on local water to visitors at a public meeting at Oakland Middle School on Sept. 19 2016.

The safety of the water supply in some Minnesota towns is being scrutinized after new federal guidelines determined the water contained too much of a potentially cancerous chemical.

In May, the Environmental Protection Agency reduced the amount of Perfluorochemicals, or PFCs, allowed in drinking water after research showed they might cause negative health effects. Now, University of Minnesota researchers are looking for better ways to separate PFCs from water.

Even with the regulations keeping new PFCs from entering the water, there isn’t a good method to address those already present, said Matt Simcik, a University of Minnesota School of Public Health associate professor whose lab has searched for two years for a method of solidifying PFCs to make them more easier to remove..

“[PFCs were used in] tons and tons of consumer products … all of that stuff doesn’t stay where we want it to stay — it ends up in our waste stream … which becomes someone else’s drinking water,” he said.

The chemicals were made to protect against stains or in foam to douse fires, Simcik said.

“It’s very difficult, even in the laboratory, to cause these molecules to break down … anything that sticks around forever isn’t necessarily a good thing … you can put them in nitric acid in the lab and they just don’t break,” he said.

PFCs have been linked with some cancers, could suppress the immune system and can build up in the liver, said James Kelly, a Minnesota Department of Health manager, adding that the chemicals can also disrupt development in fetuses.

“We don’t have a great handle on the toxicology yet,” Simcik said. “These chemicals are much different from anything we’ve dealt with before, so that makes them a bit scary.”

The new guidelines put several homes in Washington County over the PFC limit. The Minnesota Department of Health (MDH) will meet with residents of Lake Elmo and Cottage Grove for the second time Monday evening to discuss the possible health effects and answer residents’ questions.

MDH will give bottled water to those with water over the new limit and will also install filters if requested, said Walker Smith, a Minnesota Pollution Control Agency (MPCA) spokesman.

In some areas, PFC drinking water concentrations have fallen slightly which could be from gradual dilution or normal methods of processing water such as carbon filtering or reverse osmosis that can partially filter out PFCs, said Gary Krueger, an MPCA supervisor.

The MPCA hasn’t finished sampling all the drinking water in areas that might be affectedbut the department plans to test another 400 to 500 homes in coming months, Smith said.

The MPCA expects some of these untested homes also exceed the limit, he said.

“[There are] going to be a lot of water supplies that can’t meet this standard without special attention,” Simcik said.