The Gophers kept the game close, but missed opportunities kept the victory out of reach. 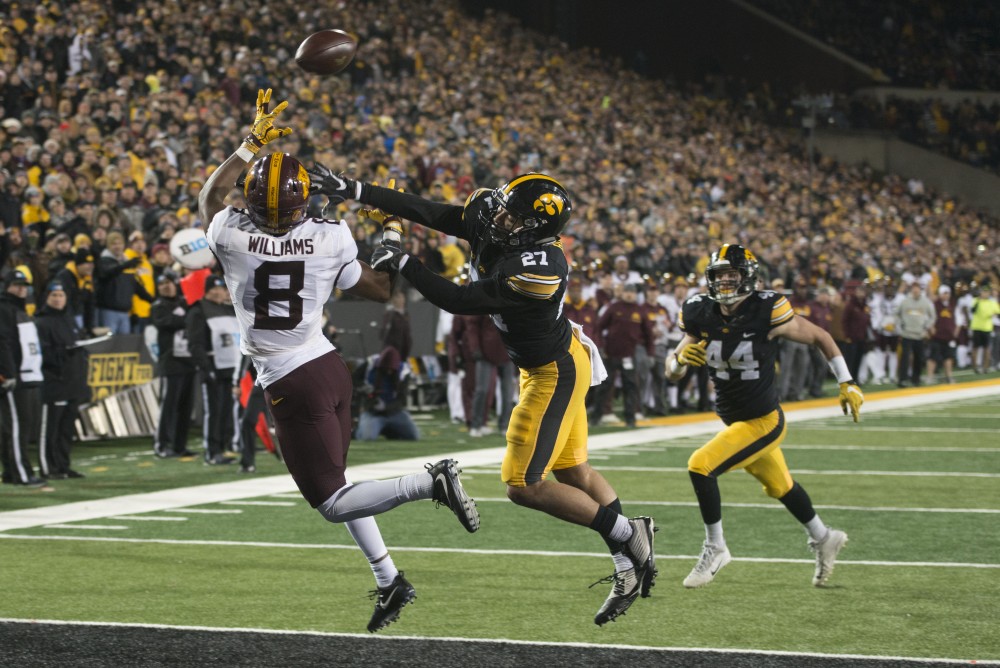 The Gophers kept it close late in Saturday’s game, which came down to Minnesota’s final possession.

With his team down 17-10, quarterback Demry Croft was wrapped up on fourth down with 56 seconds left, and the Gophers fell 17-10 to Iowa, leaving the Floyd of Rosedale trophy in Iowa for the third straight year.

“It’s one of those games, we’re just not at that point in our culture to not play close to perfect and win,” said head coach P.J. Fleck. “We’ve got to be able to play pretty close to perfect in a lot of areas on offense because of the experience, [and] a lot of other things, but again, I’m proud of the way they fought.” It all came down to missed opportunities for the Gophers, and that can be seen in the zero points they had through each of the first three quarters.

Minnesota’s offense started clicking near the end of the third quarter as the Gophers scored on the last drive of the third and the first of the fourth for their first score of the game, making it 14-7 in favor of Iowa.

The Gophers relied on the run more and short passes in the team’s first scoring drive. They capitalized on a 1-yard rushing touchdown from running back Kobe McCrary after a jet-sweep play by running back Rodney Smith to take it to the 1-yard line.

“Getting out into space, It was working for us,” Smith said. “We just didn’t make those plays when we needed to make plays, and in those situations we have to capitalize.”

The Gophers defense kept the game close and held the Hawkeyes’ offense to just 99 yards in the first six drives, 80 of which came in the opening drive alone, which resulted in the only score of the half.

“Keeping [them] contained,” said linebacker Thomas Barber. “We’ve worked on that the last two [or three] weeks now… just setting the edge, and running to the ball.” Barber shined once again for the Gophers defense, recording 12 tackles, which puts him at five consecutive games with 10 or more tackles.

“It’s unfortunate [and] that’s what I mean by the execution,” Fleck said. “Plays were there to be made, we just didn’t execute them.”

In the Gophers’ second and third drives of the game, they got down inside the Hawkeyes’ 20-yard line, but came away with no points. The second drive ended with a fourth down turnover with Croft overthrowing tight end Nate Wozniak in the end zone, and the third Croft threw an interception in the end zone.

Minnesota’s run defense held Iowa’s rushing to 125 yards, while the depleted secondary allowed 190 yards through the air in the game.

Minnesota fell to 1-4 in the Big Ten, and has Michigan at the Big House next on its schedule.

“We learned, we learned a lot,” said wide receiver Tyler Johnson. “I would say that we [are going to] learn from our mistakes and move on.”