The Gophers hadn't swept the Spartans since the 1978-79 season. 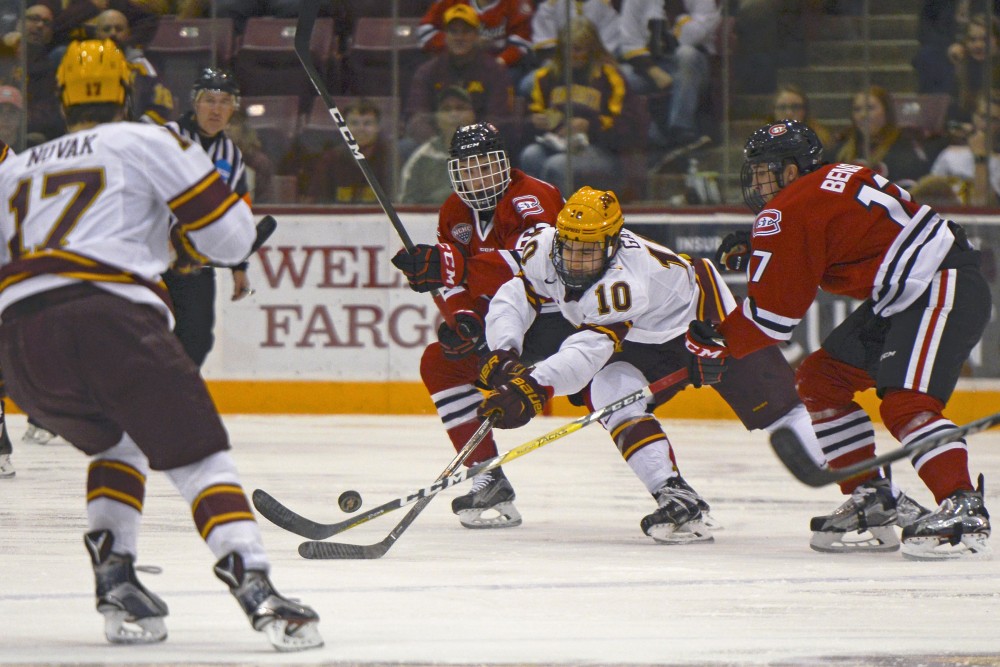 The brooms have been sitting idle for nearly two months, but the Gophers brought them out this weekend.

“It was a good team win for us,” said head coach Don Lucia.

In an early game at Munn Arena in East Lansing, the Gophers got off to a rocky start again, with Michigan State scoring the first goal just 3:30 into the first period.

The netminder attempted to clear the puck, but did not see the streaking Minnesota forward Vinni Lettieri, and the senior potted the puck into the empty net for the third goal of the game.

“I really had no time to react,” Lettieri said. “It was just kind of a non-conscious thing that I just put in, but those are just lucky bounces.”

Lettieri’s goal was his seventh of the season, bringing his season point total to 15 points in 15 games.

The Gophers got some security near the end of the game with an empty net goal from forward Darian Romanko, the first official goal of his career, to make the score 4-2.

Although goaltender Eric Schierhorn didn’t face a lot of shots, he remained consistent Friday and allowed two goals on 14 shots for the victory.

The Gophers had a major shot advantage for the game and gave the Spartans goaltender a busy night by having a 44-14 advantage.

That advantage continued on Saturday, adding to the focus of consistency this weekend.

When the score was all tied up and tensions were running high in the third period Saturday, Michigan native and Minnesota forward Brent Gates Jr. scored the go-ahead goal, and what eventually became the game-winner.

Gates had six shots of Minnesota’s 34 overall in the game.

Schierhorn put up another strong performance Saturday and saved 17 of 19 shots faced.

The Gophers fell behind early in the game yet again, just like they did Friday night. Michigan State forward JT Stenglein scored both opening goals over the weekend.

Defenseman Jake Bischoff started the comeback for the Gophers and scored the first goal of the game on his only shot of the game mid-way through the second period.

Sheehy is Minnesota’s top scorer this season, and with the empty-netter Saturday, has points in eight consecutive games for the Gophers — bringing his season total to 23 points in 16 games.

Minnesota hadn’t swept Michigan State on the road since the 1978-79 season.

“Part of the great stuff that our team does is battle back,” Gates said. “You play for each other, and you have the will to battle back and win a game on the road like that.”