U on track to meet Legislature’s requirements

The U must meet certain metrics to get its full operating budget next year. 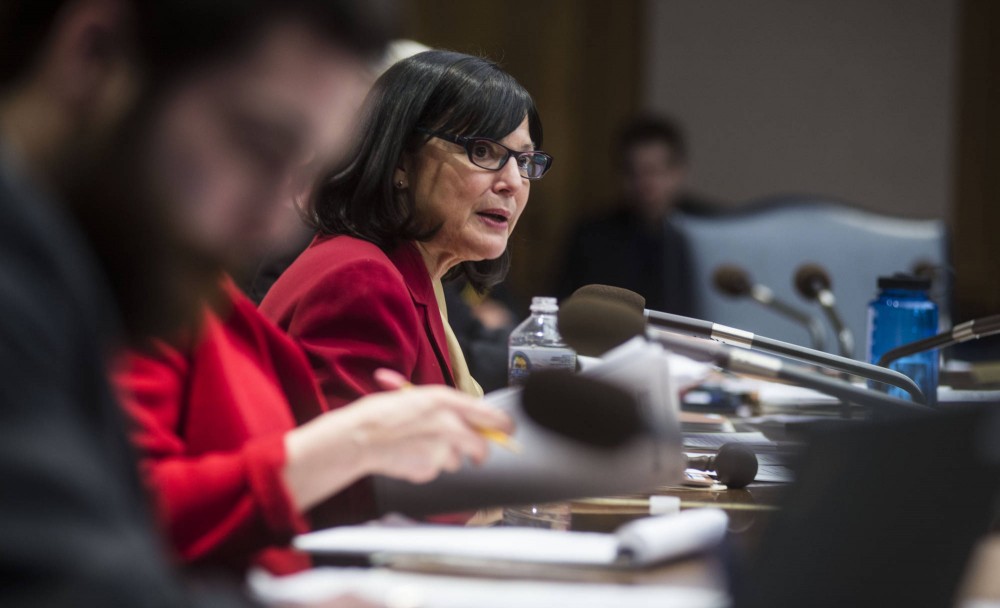 Sen. Terri Bonnoff, DFL-Minnetonka, hears a presentation regarding performance metrics from University of Minnesota administrators Friday at the Capitol.

The University of Minnesota is proving that it can strengthen its performance when more state dollars are on the line.

Following criticism of administrative bloat last legislative session, the state Legislature established performance metrics in order for the institution to receive its full operational budget funding in the next budget cycle. On Friday, senators reviewed progress reports stating the University is on track to meet the requirements.

“I was quite pleased, and I felt as though [the University] took our request last session to heart,” said Sen. Terri Bonoff, DFL-Minnetonka.

The state will withhold 5 percent of next year’s operating budget if the University doesn’t meet the goal. The findings presented to the Legislature are based on audits of the University’s administrative structure and spending, which began last spring.

The stakes are higher than before — before last year, only 1 percent of the following year’s budget was connected to state-requested performance metrics.

University Chief Financial Officer Richard Pfutzenreuter said the University is ahead of schedule to meet all of the measures, even though the institution is only required to hit three of the five. He said the University is planning to exceed portions of the state’s request, noting that it will cut more administrative spending than legislators asked.

Other expectations include increasing graduation rates of undergraduates and Pell Grant recipients system-wide by 1 percent, which Pfutzenreuter said the University is also set to surpass.

The University is required to report a more finalized version of its progress before the legislative session ends.

One of Huron’s recommendations is using a more efficient job classification system. Brown said the system redesign is going well and will finish next year.

“In 2014, a lot of changes have happened in the workplace, and our job classifications haven’t necessarily kept up with those,” Brown said at Friday’s hearing.

The upgrade will make the job application process much faster and user-friendly, she said, and data on faculty and staff appointments will be more accessible.

Another improvement, the Enterprise Systems Upgrade Program, will update the University’s technology platform. Brown told legislators Friday that changing the program could save OHR more than $560,000 annually, with additional savings
University-wide.