One in four University students has been diagnosed with a mental health condition. 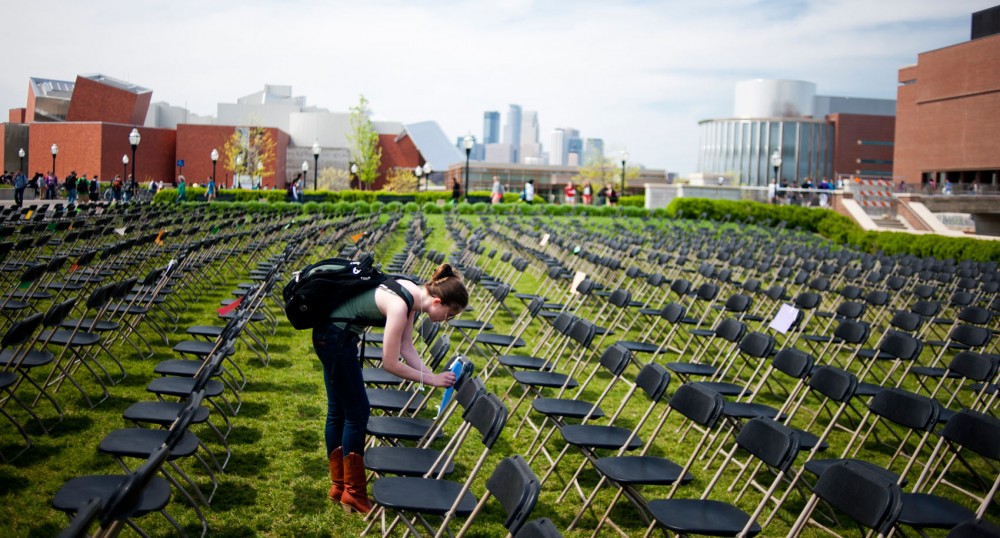 Biochemistry sophomore Hannah Barrows tapes a message of support to one of the 1100 chairs representing the average number of college students who commit suicide annually nation-wide Wednesday on the Coffman Union lawn. The event was organized by a coalition of student groups for Mental Health Awareness Day.

Black fold-up chairs — 1,100 of them — lined the front lawn of Coffman Union on Wednesday, many with personal dedications to loved ones who committed suicide or dealt with a mental health disorder.

“You will get through this! You are strong!” one sign read. “For you. For me. For not giving up,” read another.

The display was a part of Mental Health Awareness Day, organized by at least a dozen University of Minnesota student groups including Active Minds, which promotes open discussion of mental health issues on campus.

The chairs represented the 1,100 college students who commit suicide nationwide each year.

At the University, six students committed suicide in 2011, according to Boynton Health Service data. The number has been in the single digits for at least the past decade.

One in four University students reported being diagnosed with a mental health condition at some point in life, according to a 2010 Boynton survey.

Some of the chairs displayed stories University students submitted describing their experiences with mental health issues that affected them or someone they knew.

“Reading about somebody else’s experience is really a powerful thing,” said Kayla Kelsey, one of the event’s main organizers. “It not only brings the problem to life, but it also helps people who might have dealt with [mental health problems] in the past realize they are not alone.”

About 75 signs were put up as dedications or personal stories throughout the day.

One of the event’s 40 volunteers, sophomore Dan Wells, dedicated a chair to a friend who committed suicide in January.

Event volunteers, in blue T-shirts with the slogan “I stood up for mental health,” told attendees about mental health resources on campus like the Boynton Mental Health Clinic and University Counseling & Consulting Services.

The volunteers also gave away 940 T-shirts that said “I support mental health because …” and encouraged people to write their own reasons for supporting mental health.

This is the second time the event has been organized at the University –– the first was in 2010. An installation of 1,100 backpacks represented the event’s focus on student suicide prevention that year.

But this year, the focus went beyond suicide awareness, promoting students to open up to conversation about mental illness and mental health, said Claire Chappuis, Active Minds co-chair.

At 12:15 p.m. Wednesday, about 60 people crowded the chairs for a moment of silence.

“I think it went really amazing,” Kelsey said. “We had way more people dedicate and write on chairs than I thought we would.”

The volunteers collected all the colored papers with stories and dedications and plan to make a book out of them, which they’ll put on the event’s Facebook page.