No. 3 Minnesota is set for a Final Faceoff game with Ohio State Saturday. 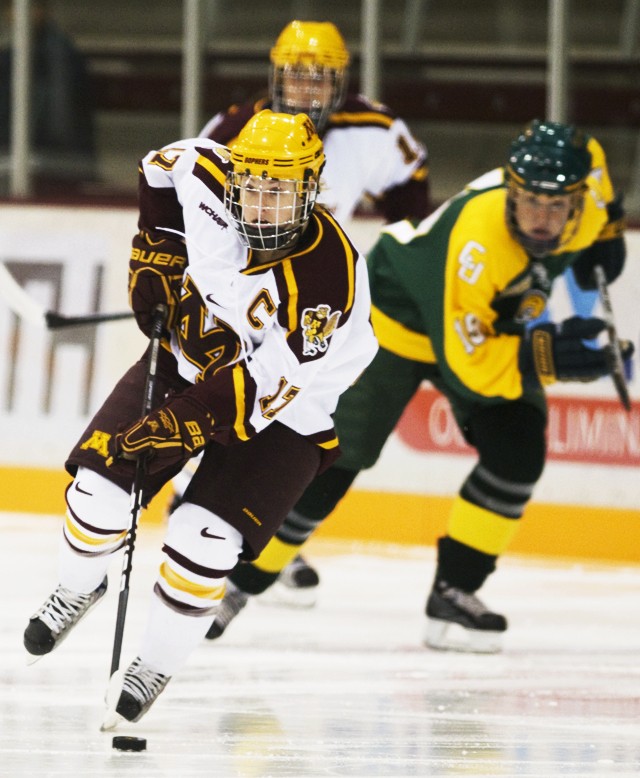 When the No. 3 Minnesota womenâÄôs hockey team advanced past Minnesota State-Mankato in the first round of the Western Collegiate Hockey Association playoffs with a 4-3 triple-overtime victory Saturday, it came as no surprise the deciding goal was from junior Emily West. West, one of four captains, has a Division I-leading nine game-winning goals this season . But the Colorado Springs, Colo. native said the feeling never gets old, especially in a marathon game like Saturday. âÄúI think thatâÄôs part of the love of the game, itâÄôs just so exciting day in and day out for everyone, not just myself,âÄù West said. âÄúItâÄôs kind of that feeling we get when we know we accomplish things like that.âÄù It may be easier to score many game-winning goals when youâÄôre the leading scorer on a team that wins consistently (West has 40 points this season), but West has had to overcome a smaller stature with noticeably aggressive play in order to produce. Minnesota head coach Brad Frost said he brought in West, all 5-foot-5 -inches of her, to add more of an attitude to the team. âÄúBack when we were recruiting her I felt like our team was a little soft, to be honest with you,âÄù Frost said. âÄúWe needed some grit and some people who would drive to the net and do a lot of the little things, and thatâÄôs what she does.âÄù But playing this style has its disadvantages. West missed a crucial weekend against St. Cloud State late in the year with a concussion she suffered in Duluth the weekend before. But Frost said while other players might sit themselves out with injuries, West has played through many of hers. âÄúMost of her goals are coming from right in front of the net,âÄù Frost said. âÄúYou have to pay the price to get into that scoring area, and if you do, chances are youâÄôre going to get hacked and whacked.âÄù As a member of the Gophers top line, consisting of sophomore Sarah Erickson and fellow captain senior Brittany Francis , there are high expectations to be able to score those big goals. But West said they thrive off the pressure. âÄúWe try to push each other to meet those expectations and exceed those every game,âÄù West said. Francis said the three have developed a relationship off the ice, which has led to more cooperation on it. âÄúThings just kind of come natural,âÄù Francis said. âÄúSo when weâÄôre on the ice, we just kind of click âÄ¦ and make great passes and great plays and play really well together.âÄù The Gophers will need this kind of teamwork during their postseason stretch, which continues Saturday at 3 p.m. with a matchup against Ohio State in the semifinals of the WCHA Final Faceoff at Ridder Arena . The Buckeyes are coming off their first-round sweep of defending NCAA champion Wisconsin with overtime victories Friday and Saturday. While the Gophers have had success scoring goals against Ohio State this season, 23 in four games , it is going to come down to one thing for Minnesota. âÄúD-zone,âÄù West said. âÄúOur offense was pretty much there âÄ¦ I think we donâÄôt need to focus on that because right now our D-zone is what we need to focus on and everything else will fall in.âÄù The Gophers didnâÄôt give their Olympic-tested goalie Noora RÃ¤ty much help in the first two periods of FridayâÄôs game against Minnesota State, leading to multiple breakaways and odd-man rushes that gave the Mavericks five goals through 40 minutes of play . Frost said he gave RÃ¤ty a few days off from practice this week after her demanding weekend, but she returned to the team Wednesday in preparation for the semifinal matchup. Saturday will also feature Final Faceoff newcomer Bemidji State taking on WCHA regular season co-champion and No.1 seeded Minnesota-Duluth at noon. The winner will advance to play either the Gophers or Ohio State Sunday at noon for the WCHA championship. Although each game Minnesota plays becomes more important than the last, Frost said he is preparing his team for one game at a time. âÄúIf we donâÄôt win that first one, it doesnâÄôt matter about the next one,âÄù he said. âÄúSo for us, our focus is completely on Ohio State, and trying to take care of business there. And if we do, weâÄôll worry about the rest later.âÄù