Minnesota squeaks out win against Augustana

The Gophers trailed by five at halftime, but Trevor Mbakwe led a ferocious comeback in the second half. 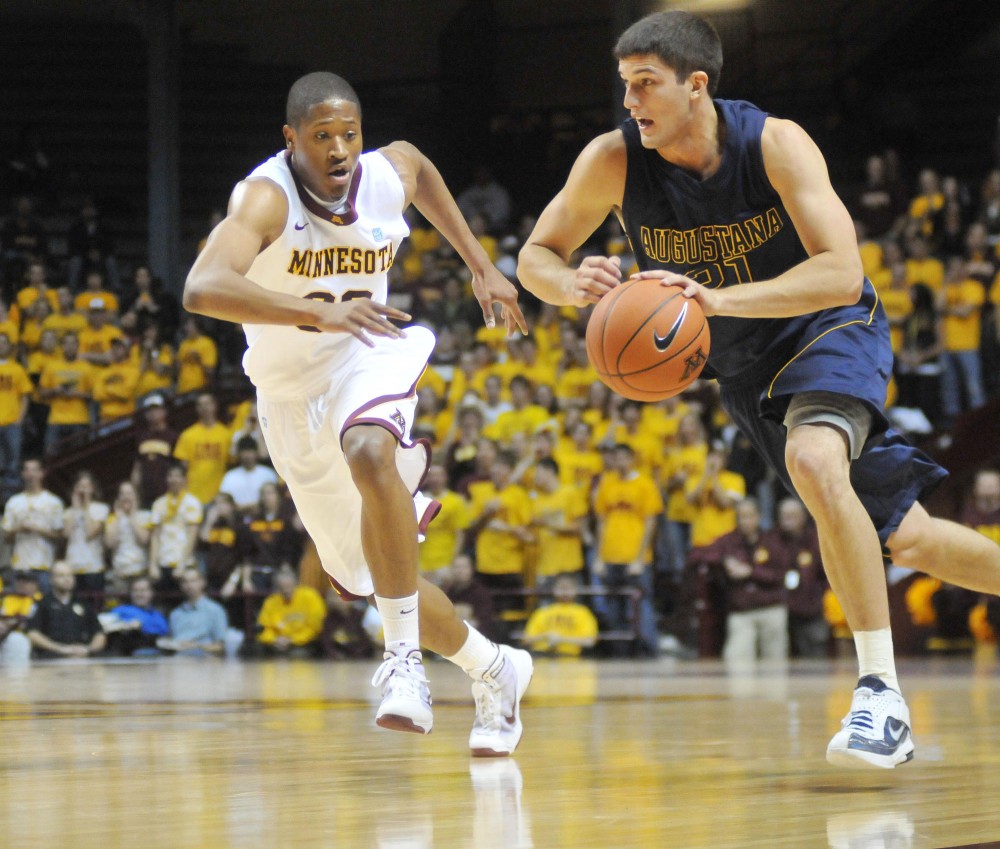 It wasnâÄôt supposed to be a close game âÄî but Augustana nearly made it one.
The Division II Vikings played with the Gophers for 40 minutes, but Minnesota held on to defeat Augustana 72-60 on Monday night at Williams Arena.
Trevor Mbakwe had 16 of his 22 points in the second half and added 13 rebounds, four assists and six blocks.
The senior forward shot 5-for-6 from the field and 12-for-13 from the free-throw line, where he struggled last season.
âÄúThatâÄôs an area he has worked on this summer,âÄù head coach Tubby Smith said of MbakweâÄôs free-throw shooting. âÄúI think he understands that heâÄôs physical enough and athletic enough that when he does get [inside], heâÄôs hard to stop. You canâÄôt really stop him one-on-one.âÄù
As a team, Minnesota shot 25-for-38 from the free-throw line. Four Augustana players fouled out, and the Vikings committed 34 fouls in total.
Yet Augustana was able to keep the game close and won several statistical categories in the process. The Vikings made eight three-pointers, had 19 offensive rebounds and forced 17 Minnesota turnovers.
Despite the GophersâÄô size advantage, they only out-rebounded Augustana 44-41.
âÄúOur size should have been an advantage for us,âÄù Smith said. âÄúWeâÄôve got to get better, consistent play from [backups] Elliott [Eliason] and Andre Ingram.âÄù
Augustana guard Drae Murray had 19 of his 22 points in the first half, during which the Vikings outscored the Gophers 38-33.
âÄúWe knew that they were a good scoring team, and they had a couple of guys that could really score the ball,âÄù junior Rodney Williams said. âÄúBut it was good for us to be down in the first half and show that we can fight back in the second half.âÄù
Cody Schilling, who once held MinnesotaâÄôs high school career scoring record with 3,428 points, added 16 points on 6-for-21 shooting.
In the end, it wasnâÄôt enough, as Minnesota held the lead it had built with a 15-2 run to start the second half.
Sophomore Austin Hollins had eight points during that run, including an alley-oop dunk on a perfect feed from Mbakwe.
Mbakwe and Williams each had three-point play opportunities during the run, although Williams missed two free throws.
Mbakwe had three assists and five blocks in the second half. When his teammates struggled âÄî which they did for most of the night âÄî he carried the load for Minnesota on both ends of the floor.
âÄúI just wanted to keep being aggressive,âÄù Mbakwe said. âÄúMy teammates did a good job of finding me when I was open, and I was able to make my free throws. I think that played a big part in the way we were able to finish down the stretch.âÄù
Minnesota finished the game on a 9-0 run after Augustana closed to within three at the 4:29 mark.
Mbakwe, who admitted to struggles at the end of games last season, had seven of those nine points as well as two blocks.
âÄúWe got some big stops,âÄù Mbakwe said. âÄúWe picked up our intensity and we held them to [20 percent] shooting in the second half, and I think that was really key.âÄù
Ralph Sampson III and Hollins âÄî two Gophers who excelled in the teamâÄôs 71-58 exhibition win over Bemidji State last Tuesday âÄî played inefficiently the whole night.
Sampson had seven turnovers and scored four points on 1-for-5 shooting.
Andre Hollins had three points on 1-for-7 shooting and had one assist and two turnovers.
Julian Welch, the GophersâÄô backup point guard who missed the Bemidji State game with an ankle injury, had seven points and four rebounds despite showing limited movement.