A golden opportunity on the silver screen for U film prof

Bizri found inspiration in war-torn Lebanon, where he grew up. 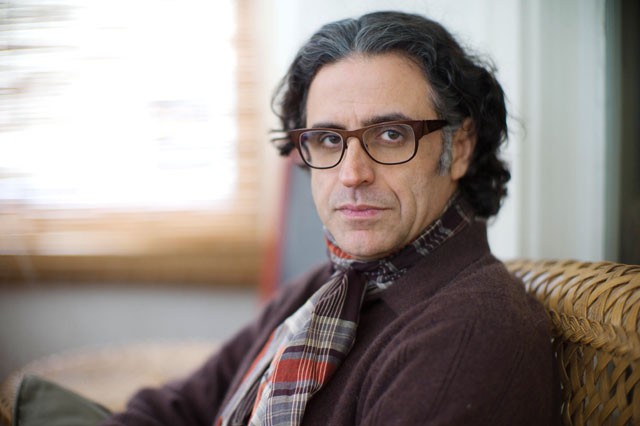 Film professor Hisham Bizri sits at his front porch Monday in St Paul. His latest script won an award in the 34th Cairo International Film Festival and will be filmed in early 2012.

The movie world is anchored in Los Angeles and New York, but a film can be born anywhere.

That includes Nicholson Hall at the University of Minnesota, where film professor Hisham Bizri holds office hours when he isnâÄôt at his studio âÄî or in Italy on a scriptwriting fellowship, or in Cairo accepting an award for that script.

Or when he isnâÄôt in Germany, where he just returned from the Berlin Film Festival. Of the nearly 4,000 submitted scripts, a dozen were selected, including BizriâÄôs, for development at the conference.

But when he returns, heâÄôll continue as a professor at the University, as he has been since 2004 when he joined his wife, philosophy professor Michelle Mason. He teaches courses in film studies and film production.

He also creates films. Of the battery he teaches, Bizri has created five courses, two of which have students actually making films, a discipline the University has little history teaching.

“ItâÄôs not just the blend of being an artist and a scholar,” said John Mowitt, a colleague of BizriâÄôs in the comparative literature department. “HeâÄôs also somebody who is utterly dedicated to teaching others his craft.

“He doesnâÄôt really see himself as merely a technician or an art teacher.”

Katharine Hooper, a philosophy junior, took her first class with Bizri last spring. She has taken five classes with him since.

“[He] really is asking you to, in a way, challenge what you already think you know about yourself,” Hooper said. She said he focuses on the humanity in cinema in a way that todayâÄôs blockbusters do not.

“[ItâÄôs] a sense of humanity and of humanism âÄ¦ almost like a reverence for the human race,” said Hooper, who regards Bizri as a mentor.

Bizri frames the challenge with teaching film practically: “ItâÄôs important that students donâÄôt have a CliffsNotes approach to cinema,” he said. “[ItâÄôs] not so much only what the story is about.”

That focus on the intensities of cinema might come from his youth in Lebanon during the countryâÄôs civil war. He also lived through several Israeli invasions.

Mowitt recalled that Bizri has said he discovered his affection for cinema during that political violence, watching Italian, French and German films in an attack shelter.

“In a sense, his very passion for the medium is marked by his affiliation as an exile from Lebanon,” Mowitt said.

Despite those formative experiences and his familyâÄôs proximity to national politics âÄî Rafik Hariri, the prime minister assassinated in 2005, was a family friend âÄî Bizri abstains from politics in his work. He favors visual experimentation and literary inspiration including Dante and James Joyce, whose novel “Ulysses” is a major wellspring for “Until Morning,” the script on its first steps toward production.

Like that novel, “Until Morning” centers on a day in the life in the authorâÄôs home country, while the author himself lives abroad. The script diverges in style elsewhere, but BizriâÄôs attention to the connection evinces his passion for the involved allusions of storytelling.

The fundraising process is ongoing, and the film is due to be shot early next year, Bizri said, in time for the Cannes Film Festival in May.

Andrew Fierberg, the producer of independent films “Secretary” and “Broken English,” has signed on for the film, and negotiations with actors are underway.

Bizri never planned to make a feature film âÄî “It just happened,” he said âÄî and did not mention the prospect of reaching his largest-ever audience. Instead he referenced his motivation for all his work: the response an artist derives from his audience.

“ThatâÄôs the aim,” he said. “To reach people, to feel you can touch them. You know that they are out there and they are waiting for your films.”