Disabled to get ‘Free Rides to the Polls’ 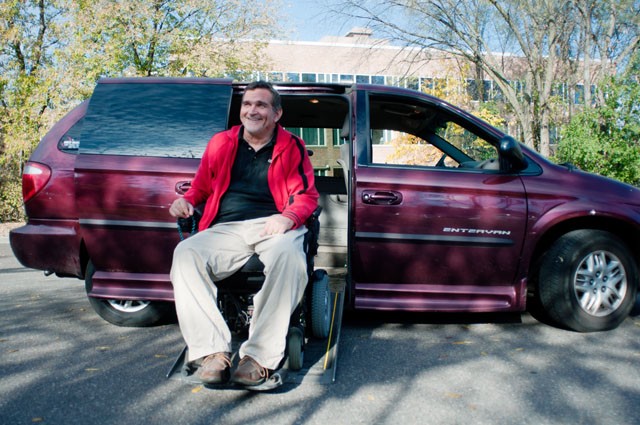 Jim Kelly demonstrates one of the handicapped accessible vans Monday at the Courage Center in Golden Valley. Vans similar to this will be used to pick up voters November 2nd.

Last election, Jeff Nachbar took a day off his job at the Brain Injury Association to drive a mini-van across the Twin Cities.
When a woman began crying in the seat next to him, thanking him for taking her to polls to vote, it was worth it.
On Nov. 2, Nachbar will volunteer again with Free Rides to the Polls, an organization that drives people with disabilities to their nearest polling place in the Twin Cities. This year 50 drivers have volunteered to operate both wheelchair accessible and non-accessible vans for hundreds of metro residents.
âÄúWe are all about empowering people, and a big part of that is voting,âÄù said Christian Knights, a public affairs associate for the Courage Center, a resource center for the disabled, which is one of many companies forming the non-partisan coalition providing rides this November.
Knights is hoping for a turnout of 400 to 500 rides. In 2008 Free Rides crisscrossed the seven-county metro area and provided close to 300 trips for residents, some of whom said they would be unable to vote without the coalition. The program began in 2006.
Many services that provide free rides on Election Day are affiliated with a certain party, said Jeff Narabrook, the public policy assistant at the Minnesota Council of Nonprofits.
As they drive you to the polls, they will support their candidate and try to sway your vote, he said.
Free Rides is the first non-partisan organization to drive people to vote in the Twin Cities, Narabrook said.
âÄúYou meet a lot of great people who care about politics,âÄù said Nachbar. âÄúThere is nothing wrong with being passionate about a candidate or cause. It doesnâÄôt matter who they vote for, we just want people to vote.âÄù
To sign up for free rides on Nov. 2, riders can call or e-mail anytime before or on Election Day. Although Free Rides prefers when people call in advance, everyone who needed a ride got one last election, Knights said.
The organization gives more independence to those with disabilities, he said.
One rider, Shelly Siegel, commented to the organization that she was grateful for the service.
âÄúI had a stroke, and this was the only way that I could vote,âÄù she said.
According to a study conducted by the Courage Center, people with disabilities are 20 percent less likely to vote than those without disabilities. It surveyed approximately 170 people across the state of Minnesota.
âÄúIf you donâÄôt vote and you feel disenfranchised, you donâÄôt feel like a part of your community,âÄù Knights said.
At the University, the sponsored program My Voice, My Vote  is working to get students with disabilities to vote.
Partnered with the UniversityâÄôs Institute on Community Integration, My Voice, My Vote helps people with disabilities transition into college, Vicki Gaylord, spokeswoman for ICI, said. The program also helps students recognize their voting rights and assists with voter registration.
Donna Johnson, Director of Disability Services at the University, said disabled students may not take advantage of Free Rides to the Polls.
âÄúThe majority of our students take the bus or already have their own mode of transportation,âÄù she said.