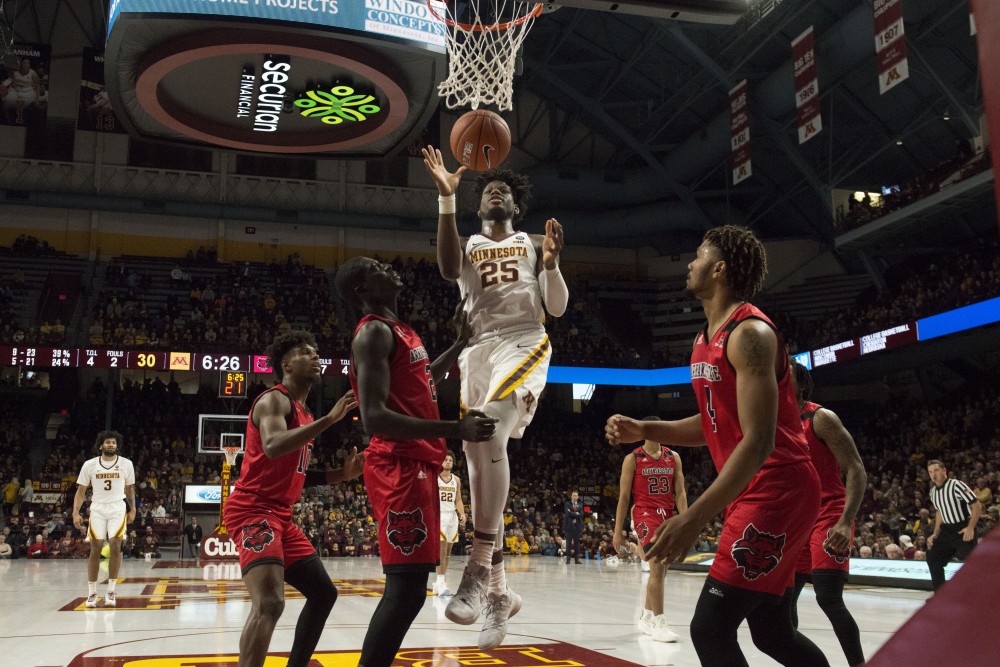 Freshman center Daniel Oturu jumps for the basket during the game against Arkansas State on Saturday, Dec. 8 at Williams Area.

Minnesota returned to non-conference competition on Saturday afternoon when the Gophers hosted Arkansas State at Williams Arena. The Gophers claimed their second consecutive victory, this time in a decidedly less dramatic fashion after coming off a gritty, come-from-behind win against Nebraska.

Freshman Daniel Oturu won the opening tip, and 17 seconds later fellow freshman Gabe Kalscheur opened the scoring with a three. From there on out, Minnesota (8-2, 1-1 Big Ten) maintained a double-digit lead to secure the win over Arkansas State (3-6) 72-56.

The result of Saturday’s contest was never truly in doubt as the Gophers began the game firing on all cylinders. They rode a 15-0 run in the first half to a 21-2 lead seven minutes into the game.

Minnesota was able to win extra possessions early on, pulling down 12 offensive rebounds in the opening twenty minutes. In that time, they held Arkansas State to just 26 percent on field goal attempts at the other end of the floor.

In the second half, the Gophers struggled to score after the Red Wolves switched to a zone defense, something that continues to vex Minnesota. Although the offense went stagnant, the Gophers’ defense continued to play well, never letting Arkansas State within 12 points.

“I was worried about that game from an emotional stand point,” Pitino said. “There’s going to be an emotional let down when you do play an Arkansas State. Good win, sitting at 8-2, but we have a long way to go to where we want to get to.”

Pitino said his team can learn from playing mid-major opponents because underdogs play aggressively. One player who knows that is redshirt senior Brock Stull, a grad transfer who previously played at University of Wisconsin-Milwaukee.

“Looking at the other way around, being that mid-major school, there’s just nothing to lose,” Stull said. “You just play that much harder.”

Oturu had the most impressive game of his young career so far, tallying his first double-double at Minnesota. He had career highs in both points and rebounds. His 19 points led the Gophers and he tied senior Jordan Murphy for the team lead in rebounds with 12.

“When you play these mid-major teams, they’re not going to have the size that you have,” Pitino said. “You have to be able to physically beat them up down-low. I thought [Oturu] definitely did that. He’s going to be a good player, it’s just going to take some time.”

Murphy came just short of a double-double with nine points. He had an uncharacteristically poor shooting night, going 2-10 from the field.

Senior Dupree McBrayer, on the other hand, showed up in the stat sheet. He made six of his seven field goal attempts, including two of three from beyond the arc. His performance was even more impressive considering his personal circumstances; on Monday, his mother passed away following a battle with cancer.

Minnesota’s next game will come on Tuesday night when it hosts Northern Florida. Pitino said McBrayer, who has started every game for the Gophers this season, will not be with the team so that he can return to New York for his mother’s funeral.

Meanwhile, the team will do its best to get a win while one of the captains is away.

“One man down, so everyone else has to step up,” Murphy said. “Everyone just has to support him, but at the same time everyone has to step up as well and work that much harder in practices to get better.”