A professor from the U worked on the study linking certain meats with cancer. 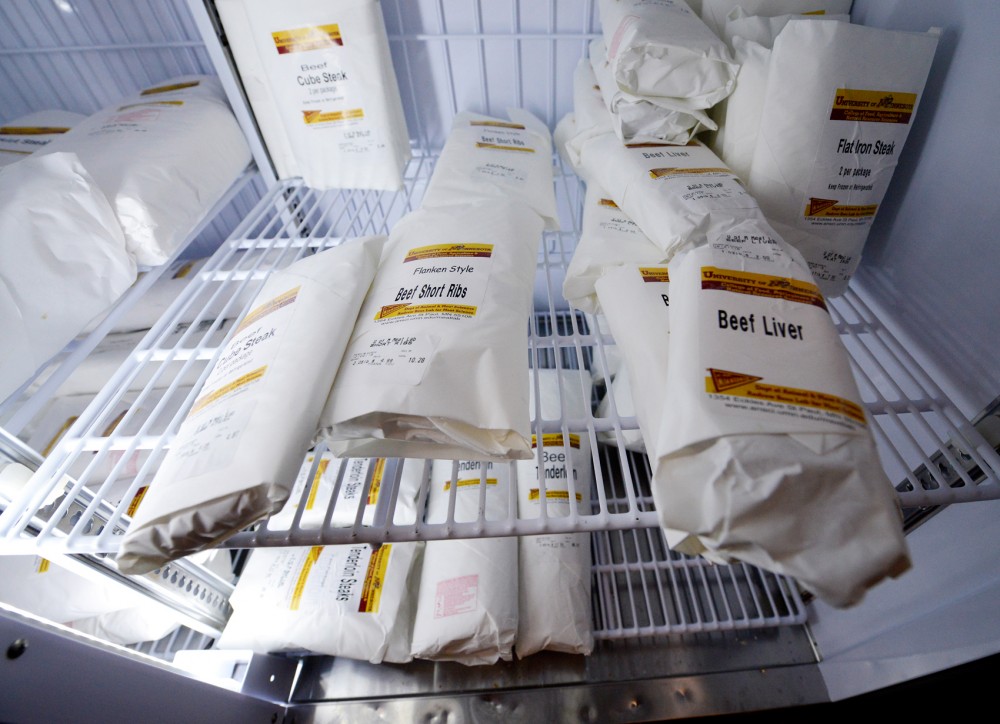 Beef processed in the University of Minnesota Meat Science Laboratory is sold at the Meat Salesroom in the Andrew Boss Laboratory-Meat Science building on Wednesday afternoon.

Kristina Busch
Another report detailing the harmful effects of consuming red and processed meat was released late last month, but experts say Americans — who eat more than 110 pounds of red meat annually — aren’t likely to change their habits.
The International Agency for Research on Cancer, a subset of the World Health Organization, announced that red and processed meats could be carcinogenic, though it’s not clear how much of the product would need to be consumed to have a negative impact.
Moreover, consumers don’t seem to be buying any less.
University Applied Economics Associate Professor Marc Bellemare said he doesn’t think the market for meat will change.
“People are fairly attached to meat consumption in the U.S.,” he said. “The people who would be convinced by this data have already made up their minds that meat is bad for their health. It’s like preaching to the choir.”
University of Minnesota Masonic Cancer Center Analytical Biochemistry Director Robert Turesky, with 21 other experts, evaluated previous studies looking into the effects of red and processed meat — meats that have been altered in some way, including being smoked or preserved — and the group voted on the products’ classification.
“The vote was not unanimous, but the working committee felt that the consumption of processed meat led to a small, yet significant increase in the risk of colorectal cancer,” he said, adding that the group found a smaller correlation between cancer and red meat and labeled its risk of causing cancer as probable.
Red meats differ from processed meats because nitrates, which are used for preservation, aren’t added to them, Turesky said. Those nitrates can create chemical reactions in a person’s gut and potentially damage intestinal DNA, leading to cancer.
Still, he said grilling meat on a charcoal barbeque can cause chemicals in rising smoke to enter the meat that wasn’t originally preserved with nitrates.
Though the report didn’t conclude how much meat must be eaten to cause cancer, Turesky said there’s still a small risk.
The data isn’t new, he said, but it reinforces the negatives of eating too much of a good thing.
“People should not eat grilled steaks, burgers or bacon every day,” he said. “They should be eating a very balanced diet that includes not only meat but fish, poultry and vegetables.”
University of Minnesota Food Science and Nutrition Club President Phillip Horsager said he recommends eating beans, nuts and eggs as a meat substitute.
He also said practicing self-control can help with healthy living.
“Go ahead and eat red meat, fatty foods, high-carb foods or anything else,” he said. “It doesn’t really matter that much as long as it is in moderation.”
Delete Image
Align Left
Align Center
Align Right
Align Left
Align Center
Delete Heading