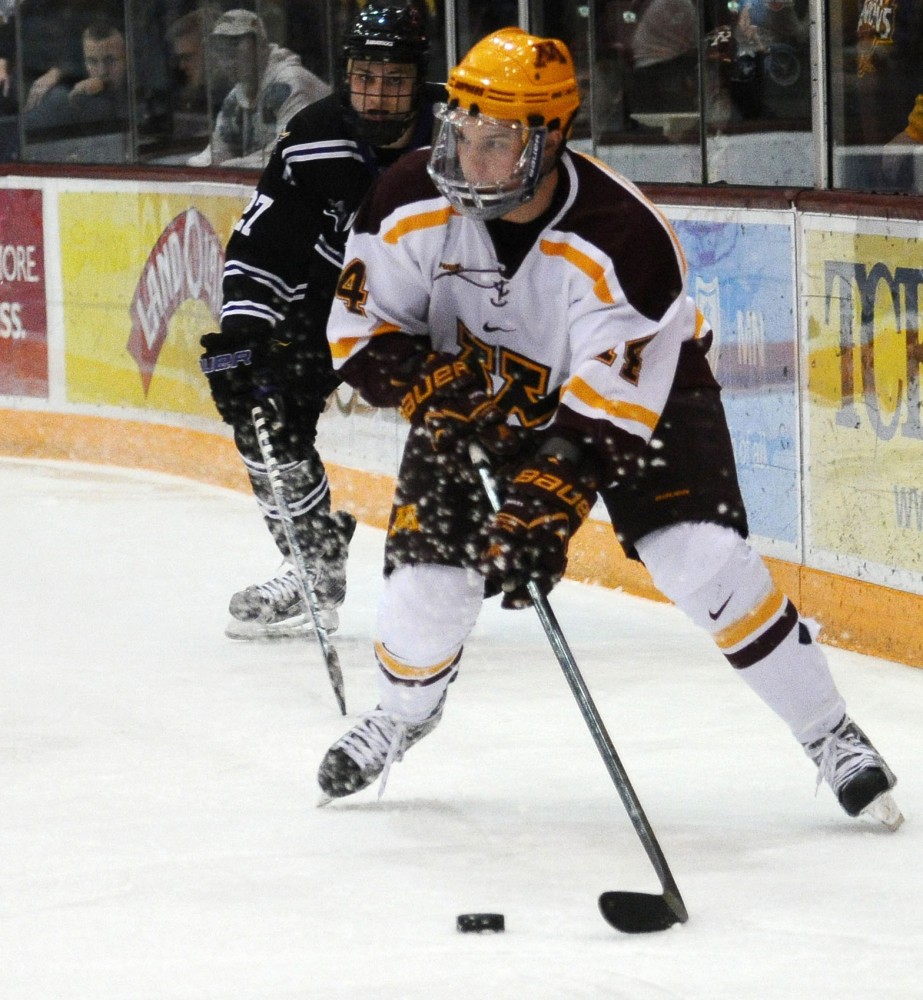 MANKATO, Minn. — The Gophers ended their weekend battle against Minnesota State-Mankato with a better idea of just how hard conference games are going to be this season.

The second-ranked Gophers defeated the Mavericks 3-2 in the first stanza of a home-and-home weekend series at Mariucci Arena. The Mavericks rebounded with a 5-3 victory at their home rink Saturday.

“It’s always going to be like this,” head coach Don Lucia said Friday, referencing last year’s close games between the two teams. “They’re amped up to play us, and we understand that.”

Zach Budish scored the game-winner Friday on a rebound early in the third period and completed a team hat trick of sorts. Minnesota scored three power-play goals, one in each period.

“It was just a rebound in front — I think Kyle [Rau] whacked at it, too,” Budish said. “I just found the back of the net. I didn’t even know it went in at first.”

Friday’s third period was the only time Minnesota held a lead this weekend.

Budish was on the first line this weekend with Rau and Nick Bjugstad for the first time this season. The trio spent much of last year in that same position.

“We felt we had to get [Budish] going,” Lucia said Friday. “He ended up getting the game-winning goal, so from that point, it worked.”

The Mavericks struggled on the penalty kill early this season, so both teams knew special teams would play a big role in their series.

That held true in the first period for both teams and throughout the game for Minnesota.

“We spent a little extra time this week on the power play,” the Gophers’ Nate Schmidt said Friday. “I don’t think the head coaching staff was too happy with our output as a pair of units, so we spent a lot of time shooting and making sure we got pucks to the net.”

The Gophers and Mavericks traded goals before Budish’s game-winner Friday.

Zach Palmquist gave Mankato the lead in the first period before Gophers forward Travis Boyd tied it up. In the second period, Teddy Blueger regained the lead for the Mavericks before Schmidt scored a laser shot from the point on a power play.

“That was a once-in-a-while shot,” Schmidt said with a laugh. “I got a hold of it pretty good. … I don’t even think the goalie saw it.”

Schmidt added that he didn’t even see the puck tickle the twine and didn’t know it was a goal until Budish started celebrating.

Budish’s game-winner came fairly early in the third when the Gophers broke out in an offensive flurry. The Mavericks launched a shot-after-shot at goalie Adam Wilcox, but the freshman stood tall, especially in the final minutes of the game.

Power plays had a big impact Saturday, too. The Mavericks scored the game-winner after taking a late penalty.

Freshman Dylan Margonari put the Mavericks up 4-3 with a little more than three minutes left. After Bryce Gervais came out of the penalty box and skated to the bench, Margonari entered the zone and was unmarked by the Gophers’ defense.

The Gophers stayed in Saturday’s game thanks to Wilcox, who made multiple saves early after numerous Gophers turnovers. Mankato outshot Minnesota 35-28 and held a 19-7 shot-advantage after one period.

“The best team won tonight, the most consistent team, probably the more desperate team,” Lucia said Saturday. “I thought they had a good start, and I think that really was the difference in the game.”

The Mavericks scored two goals in the first 10 minutes Saturday. The Gophers’ Erik Haula scored later in the first period, and Bjugstad scored early in the second to tie the game. Haula had a goal and two assists Saturday.

Each team added another goal in the second and entered the third tied at 3-3. Like Wilcox, Mavericks goalie Phil Cook kept his team in the game with strong net play.

Cook made a spectacular save on a Gophers 3-on-1 with seconds remaining in the second period to keep the game knotted.

After Margonari’s game-winner, the Mavericks added an empty-net goal with less than a minute to play.

Both teams had one power-play goal Saturday. The Mavericks went 1-for-6 with the man advantage, and the Gophers went 1-for-5.