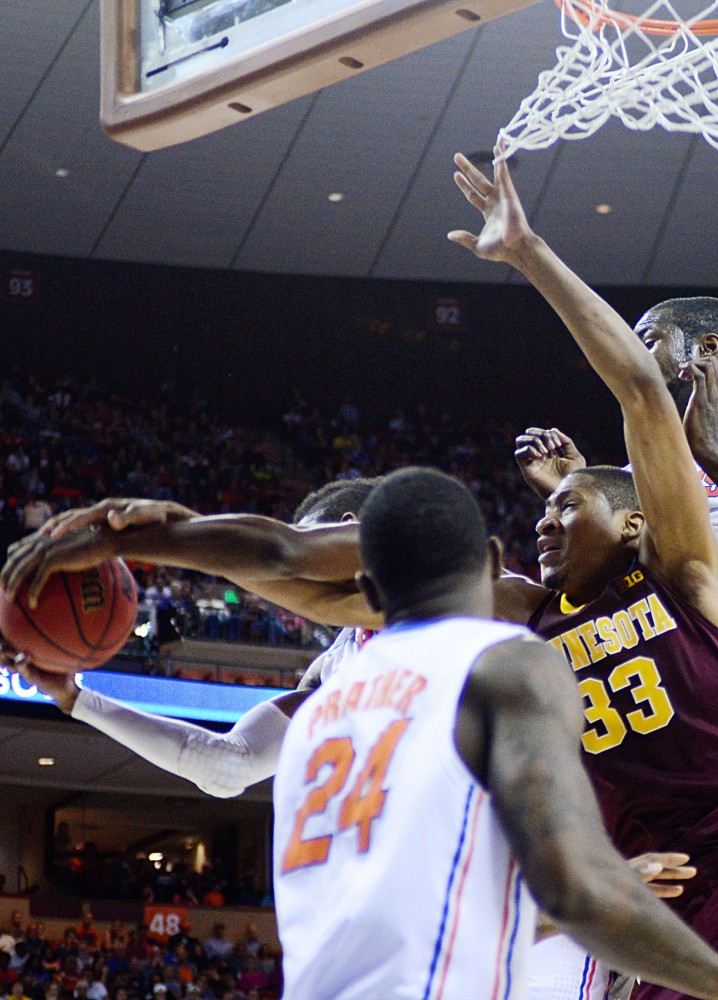 AUSTIN, Texas — The three kings of Gophers basketball stared in front of their name cards as they sat at the podium, defeated.

Neither Rodney Williams, Trevor Mbakwe nor Andre Hollins looked up to acknowledge the room full of media members until they had to. They instead shot glances at each other, seeing which one would have to talk first.

Minutes earlier, the Gophers’ season ended with a 78-64 loss to No. 3-seeded Florida in the NCAA tournament round of 32.

A 21-point deficit at halftime turned into a 14-point loss that marked Williams’ and Mbakwe’s last game in Gophers jerseys.

It could also be Tubby Smith’s last game commanding the maroon and gold courtside. The Gophers coach hasn’t had a winning Big Ten record in six years at Minnesota, and his lone NCAA tournament win with the program came Friday when No. 11-seeded Minnesota defeated No. 6-seeded UCLA 83-63 in the round of 64.

Smith finished this season with an 8-10 conference record and four losses in the Gophers’ last five games.

Smith said after the game that he didn’t feel his job was in jeopardy.

The Gators, behind 57 percent shooting, will move on to the Sweet 16 for the third straight year.

“The [21-point] hole was way too deep for us to climb out of in the second half,” Williams said.

Minnesota was given a taste of its own medicine from a Gators squad that survives by playing a press defense and making a high percentage of its field goals.

Much like its Jan. 12 loss at Indiana, Minnesota faced a large deficit at halftime and staged a comeback in the second half that fell short.

After the loss, Smith appeared to be out of words on how to describe his team’s inconsistent play.

“I don’t know what it is,” Smith said. “Maybe we’re just a slow-starting team.”

Both teams put up 23 shots in the first 20 minutes, but the Gators converted six more than the Gophers.

The eighth-best shooting team in the nation dismantled Minnesota from beyond the three-point mark, shooting 50 percent in the game.

Hollins, who scored 53 points in his first two NCAA tournament games, finished with 25 against a stingy Gators defense that switched between pressing man-to-man and zone defenses.

The Gophers’ most prolific scorer picked up his fourth foul trying to fight around a screen with nine minutes left in the game and the Gophers down nine points.

Minnesota responded by going four minutes without a field goal.

Mbakwe found himself in similar foul trouble. The senior was benched for six- and five-minute stretches in the first and second halves, respectively, and played 21 minutes altogether.

Jeff Krech, a South St. Paul native, lives in Austin, Texas, and was planning on attending the NCAA tournament’s first couple of rounds even if the Gophers weren’t in it.

When he heard the news Minnesota would be in Texas, he had to dig out a few Gophers shirts from the old closet.

But his opinions on Gophers hoops and coach Tubby Smith were fresh. He said the veteran and national champion coach is a big draw for an often-unappealing program.

“People don’t come to Minnesota for the weather, the arena or practice facilities,” Krech said. “Unless you brought in some hot guy like [Shaka Smart], then players might come [to Minnesota] for the new energy.”

Krech backed Smith, saying “from an outsider’s perspective” that he shouldn’t be fired after his sixth year at Minnesota.

Krech’s son Ben is a University of Texas freshman and had different opinions on what college-aged players might want.

“As far as living in the now,” the young Krech said, “Tubby had success a while ago. Not now.”