U area a hot spot for theft and break-ins 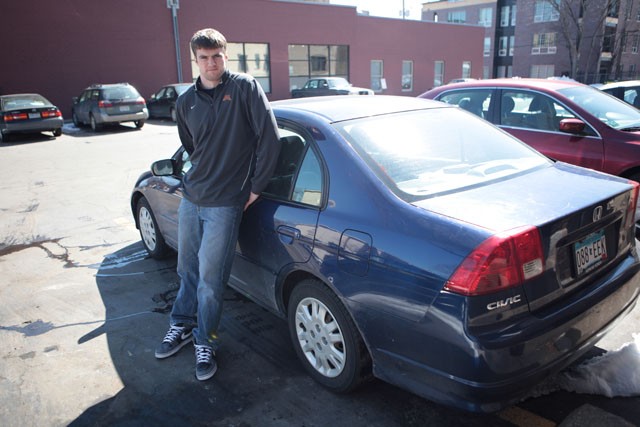 Graduate student Stephen Miller stands next to his Honda Civic Monday afternoon outside his apartment off of University Avenue. The back window of Miller’s Civic was smashed and the burglar went through the back door to steal Miller’s iPod. Miller’s car and multiple others in the lot were broken into the Tuesday night of spring break.

As Stephen Miller strolled out to his car off University Avenue earlier this month, he was stunned to find his back window shattered, belongings scattered all over the seat and his iPod missing.
While Miller found it shocking, for Minneapolis police, neighborhood organizers and long-term residents, burglaries come as no surprise in Marcy Holmes. With its high concentration of new student renters who serve as easy targets, the neighborhood has become one of the most victimized in the city.
Last year, 165 burglaries hit Marcy Holmes, ranking third among the nearly 90 neighborhoods that make up Minneapolis.
âÄúItâÄôs a supply-and-demand issue,âÄù Minneapolis Police 2nd Precinct Inspector Bryan Schafer said. âÄúItâÄôs laptops, itâÄôs electronics, itâÄôs things that any college student would bring with them if they were going off to college somewhere. So you have a large number, you have a heck of a supply.âÄù
The Southeast Como neighborhood also recorded a high number of burglaries with 126. In comparison, the average Minneapolis neighborhood had about 55 burglaries.
While the supply of electronics fuels the problem, the constant turnover of students makes it nearly impossible to combat.
Once in the fall and again in the spring, the Marcy Holmes Neighborhood Association puts out fliers about the risk of burglary.
Association Director Melissa Bean said the burglary problem is one that will probably never be solved.
âÄúItâÄôs always a new crop of people that can be victims,âÄù Bean said. âÄúItâÄôs just a matter of being aware. You just have to keep hammering every year.âÄù
Police send alerts to residents when a string of burglaries occurs, like last November, when more than 40 people reported automobiles break-ins.
For the most part, however, break-ins in Marcy Holmes are crimes of opportunity which lead to fairly consistent crime tallies month-to-month, Schafer said.
Last year, only three months had single digit burglaries in Marcy Holmes âÄî January, February and March, according to Minneapolis police statistics. But with the warmer weather came an uptick in crime with a high concentration of burglaries occurring between April and August.
In addition to the fairly random occurrence of burglaries, the thieves fail to follow any consistent pattern, making the fight a difficult one for Minneapolis police, Schafer said. While thieves have been known to come from outside of the area to prey on students, they arenâÄôt the only ones committing these crimes.
âÄúMost students trust their own; they trust who they go to college with; they trust their roommates,âÄù Schafer said. âÄúI think kids believe other kids wouldnâÄôt steal from them. But this is not always strangers coming through the neighborhood preying on these kids.âÄù
To prevent crimes, itâÄôs important for residents to know who comes through their houses, to lock up cars and homes, record serial numbers of electronics and report suspicious behavior, Schafer said.
The latter is exactly what permanent Marcy Holmes resident Willis Ewing, 69, did last week when he saw a man lurking in the parking lot of his apartment complex. A squad car two blocks away was able to quickly apprehend the burglar.
It didnâÄôt take long for Ewing to realize that the neighborhood had a burglary problem âÄî his vintage convertible was broken into less than a year after he moved there in 2003.
âÄúI love living around the University,âÄù Ewing said. âÄúIt never struck me as a place that had this sort of problem but we have had quite a few burglaries.âÄù
Having a few watchdogs like Ewing, however, will only go so far because catching the burglars doesnâÄôt solve the problem. Those who commit property crimes face lesser punishment than violent offenders, meaning they are back on the street quicker, Schafer said.
âÄúAs frustrating as it is, until people watch who they invite into their house and take precautions to protect what they have, weâÄôre going to continue to see those types of crimes occur,âÄù Schafer said.
Since his break-in, Miller has replaced his window and moved past the incident but now makes sure the valuables he used to leave in the car are never there when he isnâÄôt.