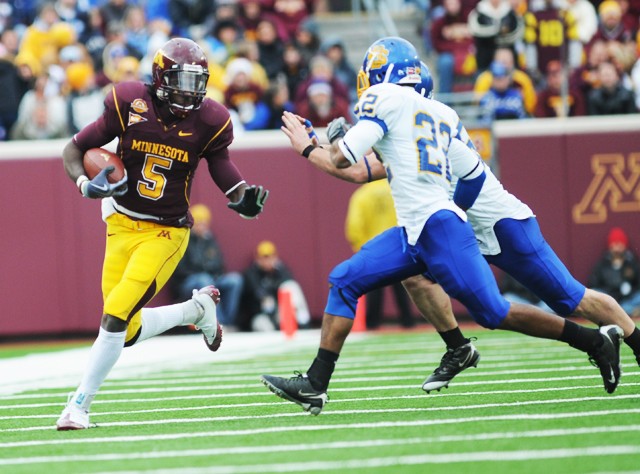 In 1982, Tim Brewster was a tight end at the University of Illinois. His Illini, coached at the time by Mike White, went to play Iowa at Kinnick Stadium . When they arrived, the visitorsâÄô locker room was covered floor to ceiling in meat locker paper. Why? Because Hawkeyes coach Hayden Fry had famously painted everything âÄî even the bathroom fixtures âÄî a light shade of pink, the idea being it would make opponents passive and somehow less competitive. So White covered it all up, just in case. âÄúYou didnâÄôt see an ounce of pink anywhere,âÄù Brewster said. Fast forward to 2009; Brewster is the head coach at Minnesota and about to take his team to Iowa City. The locker room is still pink, but there will be no meat locker paper. After all, this is Iowa. This is for the Pig. Brewster has no need to worry about a placid team taking the field Saturday at Kinnick Stadium. âÄúI swear, I donâÄôt think the color of the locker room is going to determine our performance,âÄù he said. Indeed, this game means a little bit more than all the others. âÄúEvery Big Ten game matters, but then there are some games that are up on a pedestal,âÄù junior quarterback Adam Weber said. âÄúThis and Wisconsin are games where you get extra juiced up.âÄù Especially considering what the Hawkeyes did to Minnesota a year ago in the final game at the Metrodome. Iowa absolutely embarrassed the Gophers in a 55-0 stomping during which the Hawkeyes gained 483 yards to MinnesotaâÄôs 134 . For a group thatâÄôs usually all about the team, they sure used the word âÄúIâÄù a lot on Tuesday in describing their feelings toward SaturdayâÄôs matchup Weber, with last yearâÄôs 14-of-28 performance for 127 yards and two interceptions still in the back of his mind, said, âÄúItâÄôs really important for us âÄî itâÄôs really important for myself âÄî to go out there and have a solid game and try to bring the Pig back because that would be a fun bus ride home.âÄù âÄúThat would be a great way to go out,âÄù senior defensive tackle Eric Small said of winning back Floyd of Rosedale in the final Big Ten game of his career. âÄúI couldnâÄôt think of a better way.âÄù Echoing SmallâÄôs sentiment, senior tight end Nick Tow-Arnett said, âÄúItâÄôd make my career. ItâÄôs my last chance to bring home a trophy and that trophy especially is important to this state and this team.âÄù The Iowa rivalry is not limited to the week when the teams play. Weber said fans were chanting âÄúWho hates Iowa?âÄù during the GophersâÄô inaugural game at TCF Bank Stadium against Air Force. The Pig is perhaps as important to fans as it is to the team. Of course, Minnesota (6-5 overall, 3-4 Big Ten) will arrive in Iowa City as huge underdogs. The No. 13 Hawkeyes (9-2, 5-2) have a good shot at a BCS game with a win this weekend. Just weeks ago, off to a 9-0 start, they were in the mix for the national championship game. And Iowa has crushed the Gophers recently, winning seven of the last eight meetings. But the Hawkeyes arenâÄôt invincible. Northwestern spoiled their perfect season on Nov. 7 with a 17-10 upset at Kinnick Stadium. Brewster said heâÄôs looked extensively at the Northwestern-Iowa game tape to determine why the Wildcats were successful. Redshirt freshman James Vandenberg will be making just the second start of his career in replacement of Ricky Stanzi, who was injured in the second quarter of IowaâÄôs loss to Northwestern. Despite three interceptions, he showed a great deal of poise in a hostile environment against Ohio State, completing 20-of-33 attempts for 233 yards and two touchdowns. âÄúTheyâÄôre not doing anything different with Vandenberg than with Stanzi,âÄù Brewster said. âÄùVandenberg is a really good young quarterback. HeâÄôs got an extremely strong arm. Very confident young guy.âÄù The Gophers will try to stop the confident, young quarterback and better their bowl prospects at 11 a.m. Saturday.