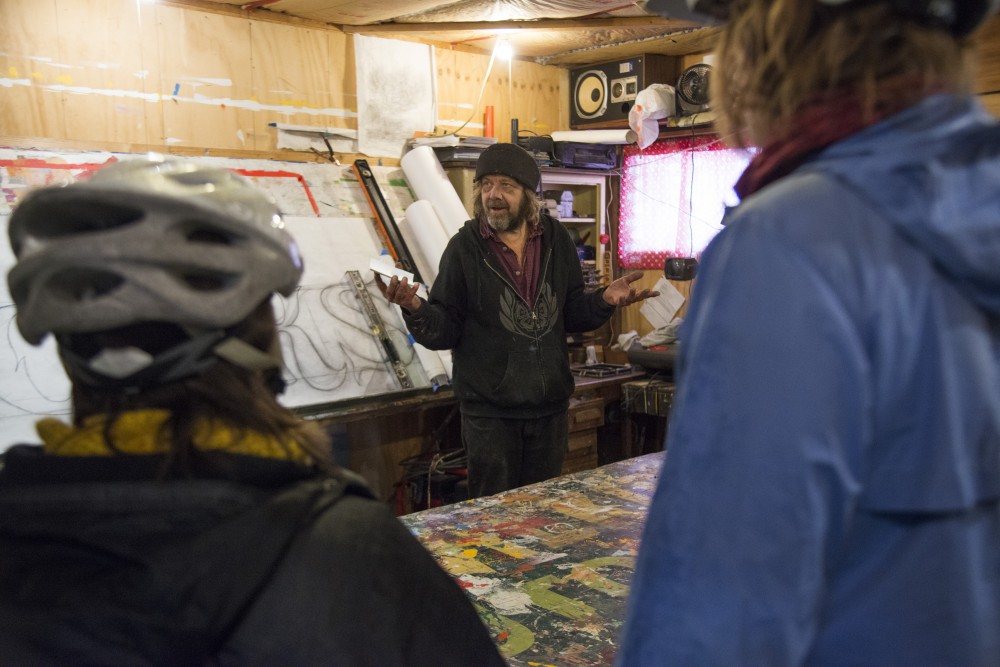 Phil Vandervaart talks about his street art before the alley ride hosted by the Minneapolis Alley Initiative for Neighborhood Stimulation on Sunday, Nov. 4. A map of the ride, which features public art in the Longfellow & Powderhorn neighborhoods, can be found online.

Some of Minneapolis’ most iconic art isn’t in a museum, or even inside at all. Rather, it’s down alleyways.

Throughout the Powderhorn and Longfellow neighborhoods, magnificent murals overlay garages, sides of stores and backing panels. Created by a plethora of Minneapolis artists ranging from graffiti gurus to professional sign makers, the “alley art tour” is a stellar way to take a turn out of the ordinary and discover something new.

“I’m trying to turn the block inside out,” Minneapolis Alley Initiative for Neighborhood Stimulation founder Christian Huelsman said. “There’s just so much cool space all around us, people just need to get out and see it.” A victim of crime in an alley in 2011, Huelsman said he decided to dedicate his time to revamping alleyways in hopes of catalyzing neglected areas within cities. According to him, change starts from the inside.

“Really, we create the spaces that we neglect most in the city,” Huelesman said. “But some of our darkest places have the most beautiful art — it’s time people realize that.”

The founder and only official member of the Minneapolis Alley Initiative for Neighborhood Stimulation, Huelsman has been partnering with local street artists to help raise awareness for the alley revamp initiative.

By leading walking and biking tours all across Minneapolis, Huelsman is slowly but surely getting the wheel turning in the right direction.

“My stuff is known for kind of just being all over the place around the city,” professional artist and MAINS ally Phil Vandervaart said. “I love doing this in Minneapolis, I just can’t work for other people.”

With work at the Hub Bike Co-Op on West Bank, Moon Palace Books on Minnehaha and even the towering mural of F. Scott Fitzgerald atop the Fitzgerald theatre in St. Paul, Vandervaart has put his mark across the Twin Cities.

“I’m kind of a reuse artist. Dumpster diving and whatnot,” Vandervaart said. “I have to be making art, it’s what I do.”

As nonchalant as the genius sounds working out of his backyard shop, the Minneapolis native’s work isn’t just local — it’s featured across the world.

From painting storefronts for the “Mighty Ducks” set to working with The Cohen Brothers, there is much more to Vandervaart than meets first glance.

As Sunday’s tour winded from neighborhood to neighborhood on a chilly, damp November morning, cyclists were fully engrossed in the art. There was simply so much to look at.

With eye-warming murals of rising suns, stoic city scenes with piquant pops of color and a mural of a giraffe spitting out a rainbow with birds and some extraterrestrial species, this urban art museum was certainly off the beaten path. But there was so much of it. Really, it was astounding.

“I’ve lived in Minneapolis my entire life and I’ve never seen half of these,” said bike tour participant Rob Stepaniak. “It’s incredible to view all of these pieces together in one go like this.”

A truly unique experience, this two-wheeled excursion is a fantastic alternative for anyone in search of a break from the classic art joints around town. From graffiti to graphic design, you never know what you might find around the corner when it comes to Minneapolis art.

For anyone looking to repeat the route, start at Peace Coffee and wander through surrounding alleys (they almost all have at least one mural) until you reach 35th Street. Then make your way to 42nd Street. Eventually, you’ll want to end up across Highway 52.

From this point, pedal north to the Corcoran neighborhood, staging yourself roughly parallel to Bloomington Avenue on your right. Lastly, make a large loop around Powderhorn, reaching Portland Avenue and making your way to East Lake Street. End at the Hi-Lo diner.

The ride is approximately 14 miles and takes about one and a half hours.