The group approved its $177,450 budget Tuesday evening after months of discussion among members. 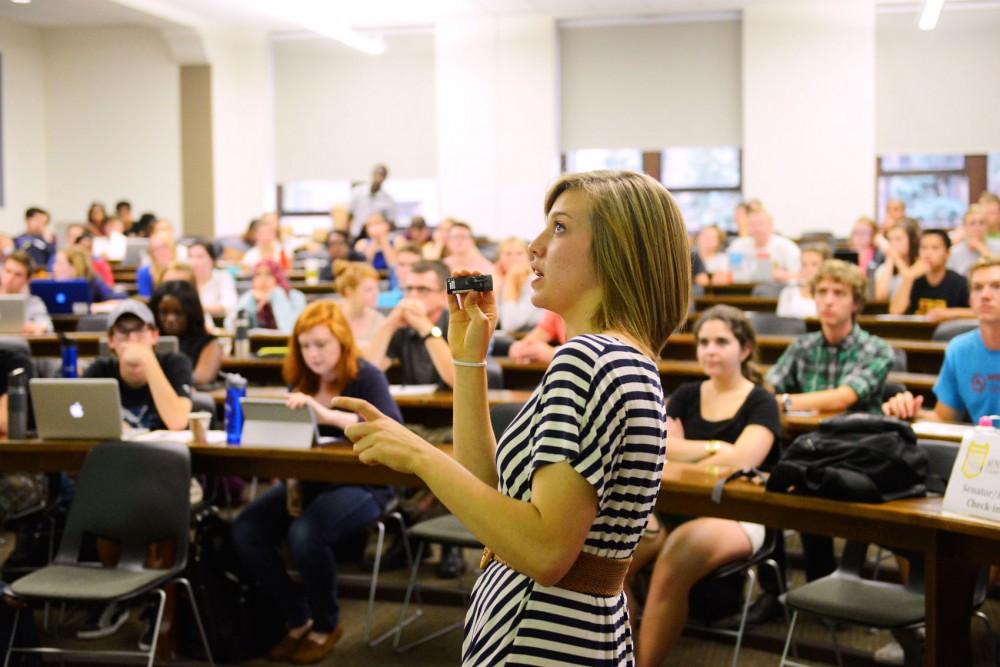 MSA President Joelle Stangler speaks at the first forum meeting of the year on Tuesday at Fraser Hall. MSA has been working on their budget since April and voted to pass their 2014-2015 fiscal year budget at the meeting.

After a push to involve more members and be more transparent with its budget-making process, the Minnesota Student Association passed its new budget Tuesday night with little debate among members.

At its first forum of the year, the student government approved its $177,450 budget after months of review from its members, who say they plan to use the money to help students rather than spending it on MSA members.

MSA failed to agree on a budget at its first meeting last fall, partially due to disagreements over group leaders’ stipends, which some argued were too high.

Other areas received cuts, like food budgets for MSA meetings, which shrank about $4,000 from last year. The group also eliminated its annual banquet. The budget also outlined funding for a partnership with the Aurora Center for Advocacy and Education and events like Support the U Day and Voterpalooza.

Domingo Ramirez, the group’s chief financial officer, said another reason the budget didn’t pass immediately last year was that it was released to forum members only a few days prior to the meeting and there wasn’t enough time to review it.

Over its leadership retreat this summer, Stangler said the team reviewed its budget line-by-line to ensure that the executive board knew what the budget contained.

In the future, Stangler said she’d like to see even more feedback from members during the budget planning process.

Even though MSA leaders frequently emailed members updates on the new budget, Ramirez said, that doesn’t necessarily mean they looked at it.

Still, Ramirez said MSA is heading in the right direction by sending the budget out sooner.

“It’s a great step forward in getting to be more transparent and making sure everyone has a say in the budget,” he said.

Alpha Gamma Rho’s representative to MSA, Connor Klemenhagen, said although the budget was passed more quickly than he thought it would, he noticed a lot went into its creation.

Ramirez said passing the budget was just the first part of being able to accomplish MSA’s goals for the year, and the student government leadership wants its members to focus on that aspect.

With the new budget in place, Stangler said the group can now direct its attention to its main goals for the year. MSA will discuss its platform in the coming weeks and will meet again later this month, she said.

“For us, it’s less of a budget and more of a framework of where our priorities are,” she said.