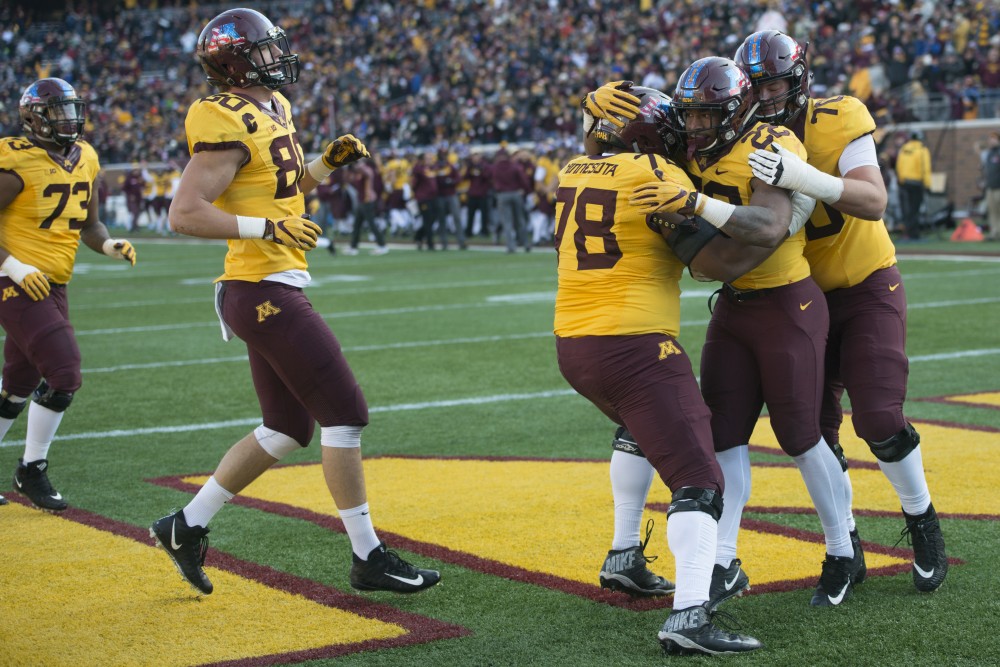 The Gophers celebrate a touchdown at TCF Bank Stadium on Saturday, Nov. 11.

Minnesota heads to Evanston on Saturday to take on No. 23 Northwestern. The Wildcats have won three Big Ten conference games in overtime this year and have beat four Big Ten team the Gophers lost to — Purdue, Michigan State, Iowa and Maryland.

The Gophers beat the Wildcats last year in the final home game of the season 29-12. It will be a tough one for the Gophers this year, as the Wildcats have won the last five in a row.

Northwestern’s defense has allowed just 247 total rushing yards in the past three games, and they are ranked second in the Big Ten in terms of rush defense.

When Northwestern runs the ball:

Northwestern is a passing team. In last week’s game against Purdue, the Wildcats rushed for 94 yards compared to 296 yards of passing on offense. Justin Jackson is their leader at the running back position. Jackson averages 84 yards per game and he has eight rushing touchdowns on the year.

The Gophers passing game has been made up mostly of one player: wide receiver Tyler Johnson. In recent weeks, teams have bottled Johnson up, as he only has 86 yards in the previous two games with no touchdowns. The Gophers offense is dominated by the run game, so the passing offense ranks second to last in the Big Ten.

The Northwestern pass defense is ranked at dead last in the Big Ten, giving up 279 yards per game through the air. Safety Godwin Igwebuike paces the defensive backfield with 65 tackles.

When Northwestern passes the ball:

Northwestern passes the ball much more effectively than running it. The Wildcats caught 26 passes for 296 yards and a touchdown in last week’s win over Purdue. The starting quarterback Clayton Thorson throws for 258 yards per game on average. The receiving core is very deep for Northwestern as six players have 200+ receiving yards this season.

The Gophers pass defense ranks third in the Big Ten. Last game, stopping the pass was the weak spot for the Gophers as they gave up 311 passing yards to Nebraska.

While both teams are on a hot streak, and both teams’ offenses are getting points on the board, Northwestern defeated four Big Ten opponents that the Gophers lost to this year. Each team has had mostly close games this year, but Northwestern should come out on top.