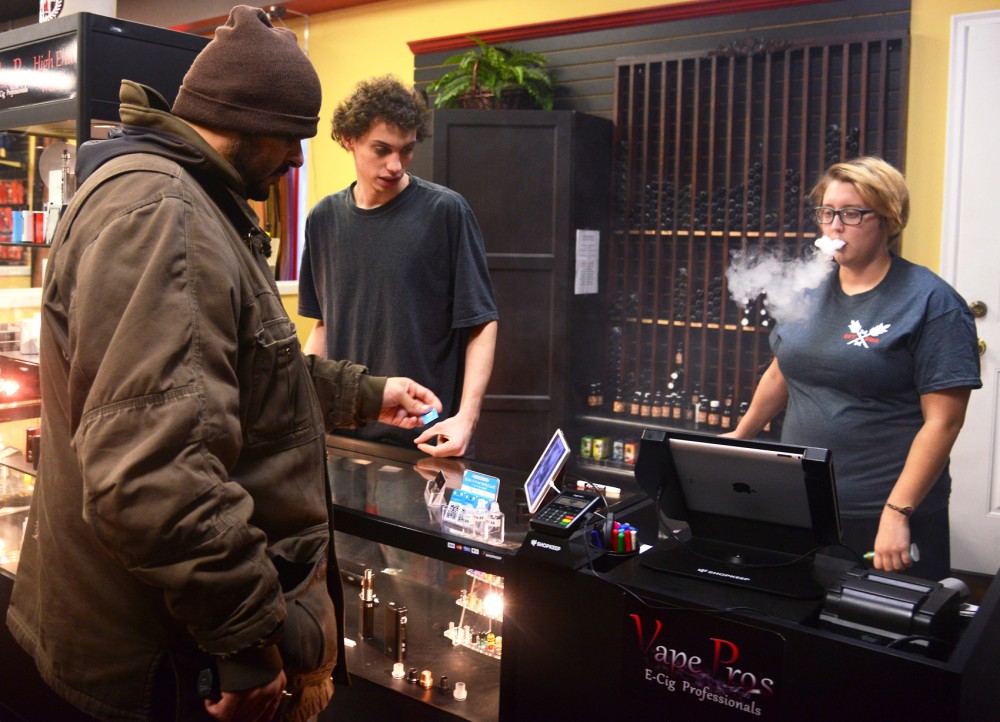 Taya Banjac
Convenience stores and gas stations in St. Paul have until April to clear their shelves of all non-menthol-flavored tobacco products.
St. Paul City Council followed Minneapolis’ lead Jan. 6 when it unanimously passed an ordinance that narrows the sale of flavored tobacco products — including e-cigarettes — to adult-only tobacco stores. The ordinance addressed community concerns that flavored products are accessible to and marketed toward children.
“Tobacco causes a lot of serious illnesses that will put a lot of burden on the taxpayer in the future, and I think we have to do everything we can to prevent that,” St. Paul Council member Dai Thao said.
According to a study published by the Centers for Disease Control and Prevention, 70 percent of middle and high school-aged tobacco users had used a flavored product in 2014. For the first time, e-cigarettes were the most commonly used tobacco product among students, and 63 percent of e-cigarette consumers have used some type of flavoring.
Some retailers in St. Paul opposed the change, according to letters filed with the city council. Business owners claimed the change punishes them unfairly and will cost gas, food and drink sales associated with tobacco.
Many also argued there are other successful procedures that prevent sales to minors, including keeping products behind counters and checking IDs.
“Banning these products from the store shelves will do nothing to solve the real problem,” said Tom Briant, executive director of the National Association of Tobacco Outlets, adding the real problem is adult friends, parents and strangers who give tobacco products to kids.
A typical retailer will lose an estimated $50,000 annually in sales under the new ordinance, Briant said.
The ordinance also raised minimum cigar prices and bans the sale of cigars in individual wrapping.
Thao said the city council isn’t against the retailers but acknowledged something had to be done to curb tobacco companies from marketing candy-flavored products.
“This is a clear message to the big tobacco industry that it’s not acceptable when they try to target young people,” he said.
Vaping retailers and supporters also confronted the ordinance, and claimed it creates a disincentive for adults who are seeking safer alternatives to traditional smoking by taking away easy access to first-time users.
“We have nicotine, but we don’t have the harmful impact that cigarettes do. I’d rather see tobacco go bye-bye and bring in more of this vaping stuff because it stops people from smoking, and that’s what we all want,” said Troy Decorsey, who owns Vape Pro’s in St. Paul. He said the vaping section in his store may go out of business if he can’t get an exemption from the ordinance.
Cap O’Rourke, director of government relations for Independent Vapor Retailers of Minnesota said there are still concerns that experimental use of e-cigs is being lumped together in studies without distinguishing whether products contain nicotine.
“What you’re essentially doing is taking these products off the shelves, but you’re leaving the harmful cigarettes, menthol cigarettes and traditional chewing tobacco up,” he said.
Delete Image
Align Left
Align Center
Align Right
Align Left
Align Center
Delete Heading