The Minnesota Daily • May 5, 2010 • https://mndaily.com/222526/news/politics/minn-supreme-court-rules-against-pawlenty-cuts/

The Legislature and Pawlenty could now face up to a $3.7 billion budget deficit. 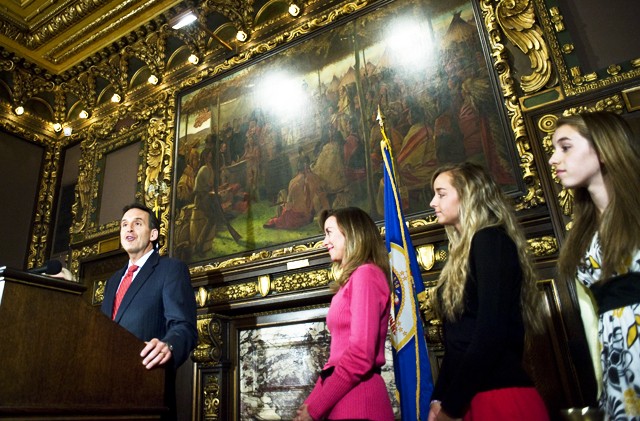 ST. PAUL, Minn. (AP) âÄî A divided Minnesota Supreme Court dealt Gov. Tim Pawlenty a significant blow Wednesday, ruling that he exceeded his authority when he trimmed $5.3 million from a state program, in a decision that raises questions about $2.7 billion in budget cuts. The split decision means Pawlenty and state lawmakers may see the current deficit grow, perhaps to $3.4 billion. The ruling affirms a lower court decision against the Republican governor’s use of a power called unallotment to make cuts without legislative approval. The court case dealt specifically with Pawlenty’s cuts to a nutrition program for elderly and disabled adults. It wasn’t immediately clear how the decision would affect other programs affected by Pawlenty’s much larger spending cuts last summer, but the ruling called what he did “unlawful and void.” The ruling complicates the end of the legislative session, with less than two weeks remaining before a constitutional adjournment deadline. Lawmakers and Pawlenty have erased about a third of a nearly $1 billion deficit that developed after last year’s cuts, and now legislators are likely to revisit at least some of the earlier cuts he made without their consent. Pawlenty said he strongly disagreed with the decision. “Nonetheless it will require the legislature and my administration to address its budget impacts. The funds do not exist to reinstate my unallotments and the state budget needs to be balanced without raising taxes,” the governor said in a statement. He also called on Democrats who run the Legislature ratify his unallotment cuts, which they have refused to do. The high court said Pawlenty overstepped his authority because the state’s unallotment law was not meant to shift so much power to the governor. It said the governor has the power to cut funds only after the governor and Legislature agree on a balanced budget, which they were unable to do last year. “Because the legislative and executive branches never enacted a balanced budget for the 2010-2011 biennium, use of the unallotment power to address the unresolved deficit exceeded the authority granted to the executive branch by the statute,” the decision said. Chief Judge Eric Magnuson wrote the decision, with Justices Alan Page and Paul Anderson issuing a separate concurrence. Justice Helen Meyer joined in the 4-3 majority. Justices Lorie Gildea, G. Barry Anderson and Christopher Dietzen dissented. Unallotment has been on the books in Minnesota since 1939, but legislative researchers were unable to find any cases of its use before 1980. Pawlenty used it twice before last year, but not nearly as much as the cuts that sparked the lawsuit. Pawlenty made his cuts after a difficult 2009 legislative session in which he faced Democratic majorities in the House and Senate. Pawlenty signed major spending bills but used a line-item veto to block some items, and then vetoed a tax increase passed by Democrats. Instead, to balance the budget as required by the state constitution, he unilaterally canceled $2.7 billion in spending. One of his cuts âÄî the $5.3 million from the nutrition program âÄî prompted the lawsuit that led to the Supreme Court case. Galen Robinson, the attorney who filed the suit, said his six clients who rely on the nutrition program for medically prescribed special diets were “jumping for joy.” “They were elated when they even got the temporary order,” he said. “These funds are desperately needed to meet the diets that they have to maintain to maintain their health.” Pawlenty also unalloted $50 million from the University of Minnesota’s fiscal year 2011 budget. University CFO Richard Pfutzenreuter said there is little the school can do to keep the Legislature from maintaining that cut. “WeâÄôll continue to make the case that that cut’s a brutal one for the University,” he said. “But it’s really now between the Legislature and the governor.” Ramsey County Chief District Judge Kathleen Gearin had blocked the cut, writing that Pawlenty overstepped a boundary between legitimate use of unallotment and the legislature’s power. Democrats argued that Pawlenty created his own emergency by signing spending plans while striking down the tax plan to pay for it. They accused the governor of trampling on the separation of powers in the constitution. Read the Supreme Court’s ruling here: http://bit.ly/bDp2h1 -Daily reporter Devin Henry contributed to this report.