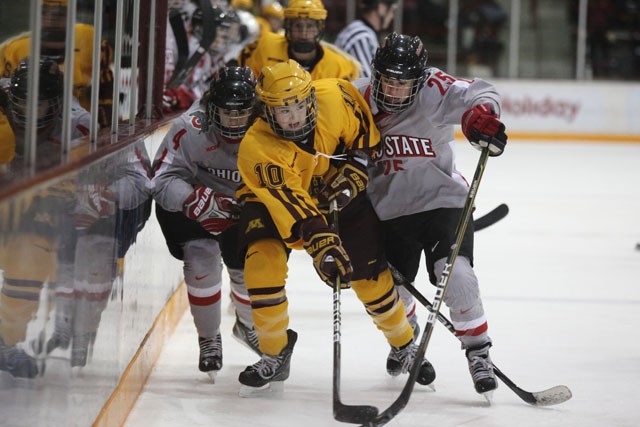 The Gophers womenâÄôs hockey team closed out the calendar year on a high note, just a day later than expected. While the Ridder Arena ice remained in pristine condition Saturday, heavy snow forced the University to reschedule the series finale against Ohio State to noon on Sunday. The delay didnâÄôt stop the Gophers, as they stormed back to defeat the Buckeyes 2-1 in overtime, capping off a sweep. In head coach Brad FrostâÄôs estimation, the Gophers played their best game of the season Friday, dominating Ohio State 6-0. From the opening puck drop, the Gophers controlled Friday nightâÄôs game. Junior Sarah Erickson scored early in the first and freshman and team-leading scorer Kelly Terry added a shorthanded-breakaway goal late in the period, which was more than they needed. Ohio State looked like a completely different team Sunday, holding the Gophers scoreless for the first two periods. âÄúI think they battled,âÄù defenseman Megan Bozek said. âÄúTheir goalie played awesome. Their forwards kept us out, to the outside of the perimeter, and didnâÄôt give us shots.âÄù The Gophers broke through in the third period when defenseman Kelly Seeler fired a shot from the point to tie the game. The Gophers continued to put the pressure on the Buckeyes in the waning minutes of the period, but the game went to overtime, a first for the Gophers this season. Just 1:46 into the extra period, Bozek lined up a shot from the right side of the ice. The puck fittingly bounced off two posts before settling in the back of the net. The Gophers are 7-1 over their past eight games and head into a four-week break playing their best hockey of the season. âÄúI wish we had another weekend to sweep another team,âÄù Bozek said. West opts to redshirt Senior Emily West, the teamâÄôs leading scorer last season, will opt for season-ending surgery and preserve her final year of eligibility with a medical redshirt, Frost said Sunday. West, who was injured Oct. 2 against Clarkson, has played only four games this season.