If the Senate also passes the amendment, it will appear on ballots this November. 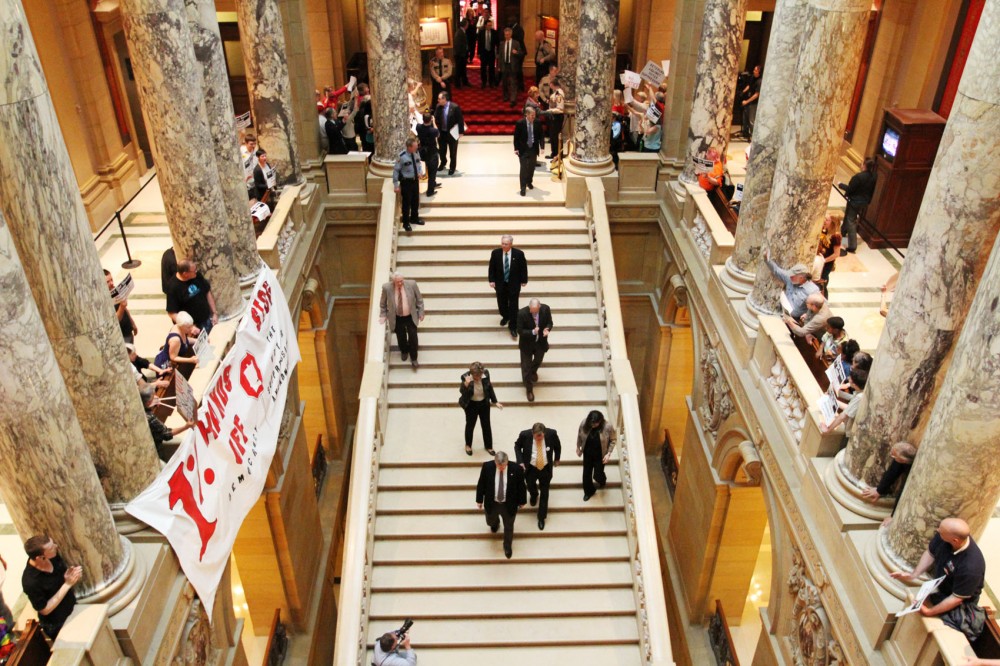 Members of Occupy Minneapolis and other organizations came out to protest the proposed voter ID amendment that, if passed, would be on the ballot in November.

The bill passed on a 72-62 party-line vote, with Republicans favoring the measure.

The amendment would require all voters to present a government-issued photo ID at their polling place and would take effect if a majority of citizens voted in favor of the amendment in November. The Senate still needs to pass the amendment before the amendment reaches voters.

On the November ballot, voters would be asked, “Shall the Minnesota Constitution be amended to require all voters to present valid photo identification on election day and that the state provide free identification to eligible voters?”

If voters approve the measure in November, the next Legislature would be required to pass legislation explaining how the state would carry out fulfilling the photo identification requirement.

The controversial amendment has been subject to much debate since its introduction and dissent over the bill has been based on party lines.

On Monday, the House Rules and Legislative Administration Committee approved sending the bill to the House floor after a 13-10 party-line vote, with all DFLers voting against it.

Republican legislators have argued the amendment is necessary and appropriate because citizens use identification for things ranging from shopping to getting married.

During the floor session, DFLers accused the Republican party of taking “political preferences” and inserting them into the constitution.

DFLers proposed an electronic poll book system as an alternative to the voter ID amendment, in which poll workers would use drivers licenses and state ID pictures from the state Division of Vehicle Services database in an attempt to prevent voter fraud.

Politicians and citizens who oppose the bill are afraid the amendment will disenfranchise certain groups of voters, including students.

Student government representatives have lobbied against the bill, saying that it would make it harder for students to vote as they move frequently and may not have proper identification.

Sydney Jordan, a junior at the University of Minnesota studying political science and global studies, testified against the amendment last month and was at the Capitol again Tuesday.

“This is a really important issue for University of Minnesota students because this will make it so much harder for us to vote as a community,” Jordan said.

“Minnesota has the highest youth voter turnout rate in the nation … that’s something that voter ID would really impede.”