Shuttling out of the food desert

The Minnesota Student Association debuted a grocery shuttle program that brings students to the Quarry in NE Minneapolis. 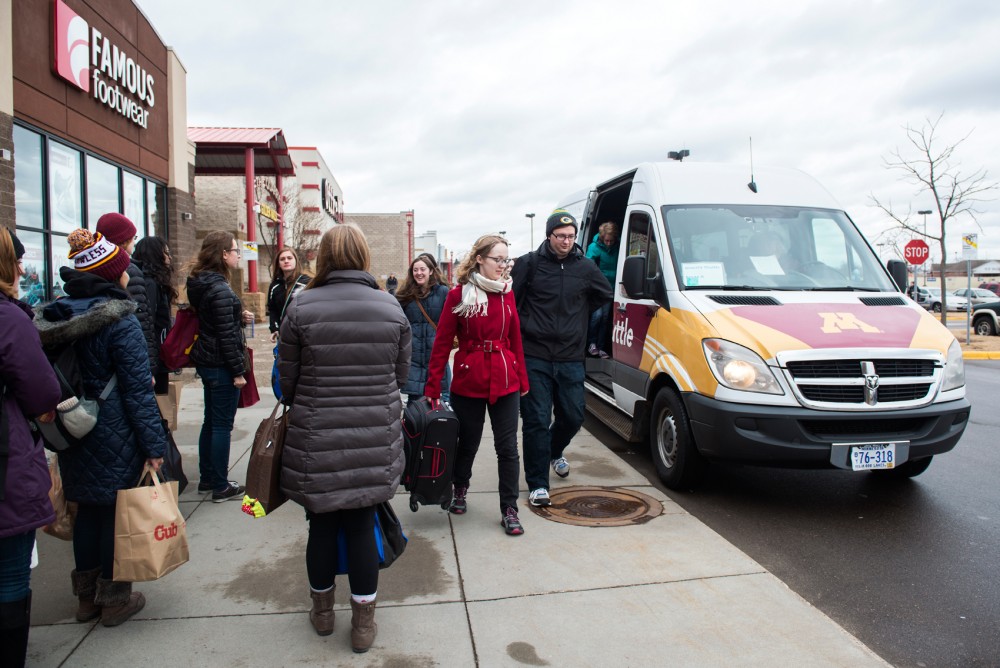 Grocery-laden University students wait to climb aboard the grocery shuttle during its Sunday pilot-day launch, while others exit to go shopping at Cub Foods at the Quarry in Northeast Minneapolis.

by Raj Chaduvula
Despite chilly winds and a surprise snowfall, a group of University of Minnesota students packed themselves into small shuttles Sundaymorning for the opportunity to buy fresh groceries.
The free trips to the supermarket were part of the launch of the Minnesota Student Association’s Food Shuttle Program, which takes students to stores at the Quarry in Northeast Minneapolis.
Amogh Kambale, MSA’s director of infrastructure, said after a semester of planning, the group was able to launch the program when it met its funding goals. Together, MSA and Boynton Health Services — which is partnering with the group on the project — raised $2,500, he said.
The program serves students in University housing and surrounding neighborhoods and addresses students’ needs for accessible and affordable healthy food, Kambale said.
“The University is a food desert, and that was our agent and argument,” Kambale said.
Sophomore Jordan Kelm lives in Stadium Village and said it’s difficult to find groceries in the area. The shuttle makes shopping for groceries much easier than before, she said.
“It’s really nice to get access to Cub [Foods] and Target, where you can get healthy food,” Kelm said.
First Transit and the University’s Parking and Transportation Services provided the two shuttles, Kambale said. The shuttles passed between campus and the Quarry, with several stops to pick up students along the way.
Sophomore Kristopher Moore said the high demand for healthy groceries packed the shuttles full, forcing him and other students to wait for the next round of buses.
Sophomores Chazz Edington and Katie Cresser said the shuttle’s routes were convenient and accessible.
“It’s easier than public transportation,” Cresser said.
Sophomore Alyssa Leitgen said getting to the grocery store previously involved getting on the light rail and walking a long distance.
“It’s important for students to have access to healthy food, and this shuttle offers that,” Leitgen said.
Freshman Kristianna Klammer said fresh food is a necessity for students, even those with meal plans.
The program was initially a pilot program set to run for two Sundays because the initial funding wouldn’t extend any further, Kambale said.
However, Cub Foods agreed to sponsor the shuttle program for the rest of the semester, extending the services, Kambale said.
Kambale said there are plans to provide larger shuttles because the initial response exceeded expectations.
“I probably will be using it again,” Kelm said.
Delete Image
Align Left
Align Center
Align Right
Align Left
Align Center
Delete Heading