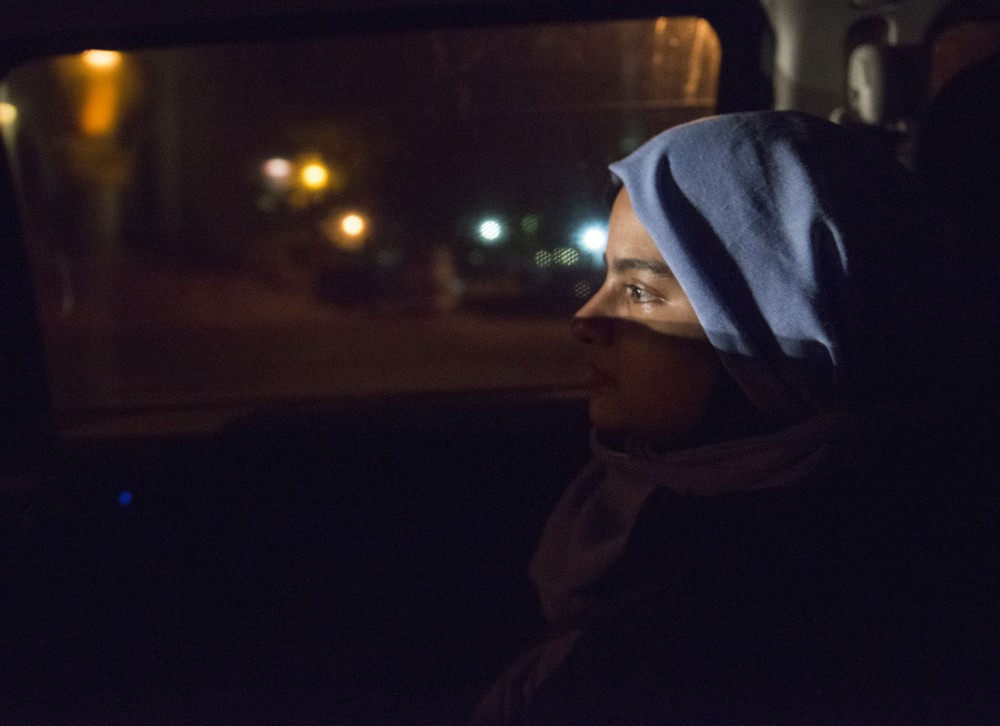 Communications PhD student Samira Musleh rides the Gopher Chauffeur on Sunday, Oct. 21, which was the first Sunday that the ride service has run as it will now serve students seven days a week.

The University of Minnesota’s Gopher Chauffeur program officially expanded from three to seven nights per week last Monday in an effort to get more students home safely on weeknights.

The expanded hours of the transport service were modeled on the positive results of a similar pilot program launched in February, which temporarily expanded the Gopher Chauffeur’s hours to six nights per week.

This new, permanent expansion was backed by the Minnesota Student Association and extended the service’s hours to include Sunday through Wednesday from 8:30 p.m. to 12:30 a.m. Previously, Gopher Chauffeur was only available Thursday, Friday and Saturday nights from 10 p.m. to 2:30 a.m.

The decision to expand the program was made this summer by Boynton Health, which runs the Gopher Chauffeur, and the Office for Student Affairs.

The new rideshare hours required Boynton to hire 30 new student employees and conduct four training sessions over the past two weeks, said Julie Sanem, director of health promotion at Boynton and manager of the program.

These new employees will operate the vans — each of which requires one driver and one navigator — and serve as dispatchers at the Gopher Chauffeur office at Boynton.

Students have already begun taking advantage of the expanded service, with 53 Gopher Chauffeur riders on Monday, 71 on Tuesday and 88 on Wednesday. These figures are comparable with the ridership at the start of last spring’s pilot expansion, Sanem said.

“Having the Gopher Chauffeur operate seven days per week along with other options such as the Campus Connector, 624-WALK, and even services like Lyft and Uber — I feel like that provides students with lots of different options to get home safely,” Sanem said.

Some students at the University associate the Gopher Chauffeur with a transportation service for drunk students, said Mateo Frumholtz, who helped coordinate and train the new employees. But, the service can also protect sober students as they commute home, he said, something that can be demonstrated by the addition of school night hours to the program.

“[People often compare the Gopher Chauffeur] to a free Uber or a free taxi, or they label it as a ‘drunk-mobile,’” he said. “Those are myths. Our primary emphasis is safety regardless of whether that student has been out at a social event or if they’re coming from the library.”

Students often struggle with relying on Campus Connectors as their primary source of free transportation on weeknights, said Christina Busche, campus life committee director at MSA. With buses running every 20 or 30 minutes, an alternative transport service can serve an important role for students.

“It can be kind of scary to walk back at midnight from the library … on a Tuesday,” she said. “Even buses at that time aren’t very accessible.”

The Gopher Chauffeur expansion pilot during the past spring lasted from Feb. 12 to April 11 and carried a total of 1,898 riders from Monday to Wednesday, about half of which were picked up on campus, according to data from the program.

The demand for rides on school nights demonstrates the Gopher Chauffeur’s importance to both sober and intoxicated students, Frumholtz said.