The University will request $100 million from the state in 2016 to keep buildings updated. 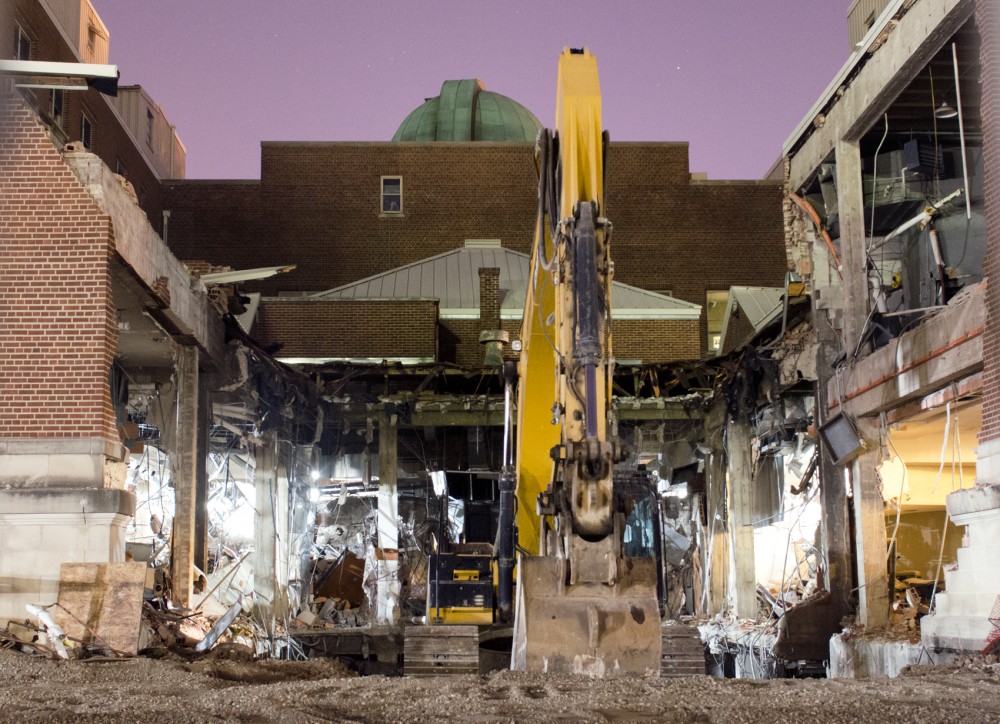 A backhoe sits in the dirt at the backside of the Tate Laboratory of Physics on Saturday evening. The renovation being done is part of a 92.5 million dollar project.

Brian Edwards
State legislators and the University of Minnesota will likely clash over use of Higher Educations Asset Preservation and Renovation funds when lawmakers meet to discuss how to divvy up the funding next year.
As the University has shifted its use of HEAPR funds to large-scale overhauls of school buildings, some state legislators say they believe the University should instead focus on multiple, smaller projects to get as many buildings up to date as possible.
HEAPR funding is intended to preserve postsecondary buildings across the state through maintenance, repairs and renovations. Among the proposed projects for the funds are upgrades to indoor fire sprinklers, leaky skylights, struggling electrical systems and vintage power generators.
The University will request $100 million in HEAPR funds from the state in 2016.
“HEAPR has never been interpreted as remodeling entire buildings,” said Rep. Gene Pelowski, Winona-DFL, who is a member of the House higher education committee.
“That’s where the University has problems.”
The University has more than 850 buildings, a quarter of which are more than 70 years old.
The use of HEAPR funds for a major overhaul of a building goes against the original spirit of the funds, Pelowski said.
In 2014, the state Legislature agreed to pay for about $59 million of the $92.5 million Tate project, which is closed while the building is modernized and brought up to code.
Instead, the use of HEAPR funds should be used to keep buildings from getting to the point that Tate Lab fell to, Pelowski said.
And until the University rearranges its priorities, Pelowski said the school and legislators will continue to disagree over how HEAPR funds should be allocated.
Chair of the Board of Regents Dean Johnson said catching up on projects at the University through simple renovations isn’t feasible at this point.
“Regent Clyde Allen used to say that if we continue to maintain our buildings at the current pace, we will get to each square foot every 100 to 110 years,” he said.
Johnson said the school has found that many of the buildings are so old that building new buildings and decommissioning old ones is the best option in certain scenarios.
The Biological Sciences Greenhouse, the Masonic  Hospital and the Mayo Memorial Building are among buildings that could be decommissioned in the future, according to board documents.
In addition, Johnson said the University is exploring the use of HEAPR funds to address Title IX concerns on other campuses, such as the Crookston campus.
Rep. Bud Nornes, R-Fergus Falls, who chairs the House higher education committee, said the necessary building repairs aren’t always flashy.
Still, he said the Legislature wants to provide as many funds to the University as possible because many politicians are aware of the multitude of necessary campus repairs.
The University could also raise funds privately through fundraisers to help afford bigger projects that the school wants to complete, Nornes said.
While Johnson said the school has been criticized many times for its use of HEAPR funds, the logistics of maintaining a campus the size of the University will inevitably draw criticism.
“There’s pressure [from all] sides,” Johnson said, “We do the best we can.”
Delete Image
Align Left
Align Center
Align Right
Align Left
Align Center
Delete Heading