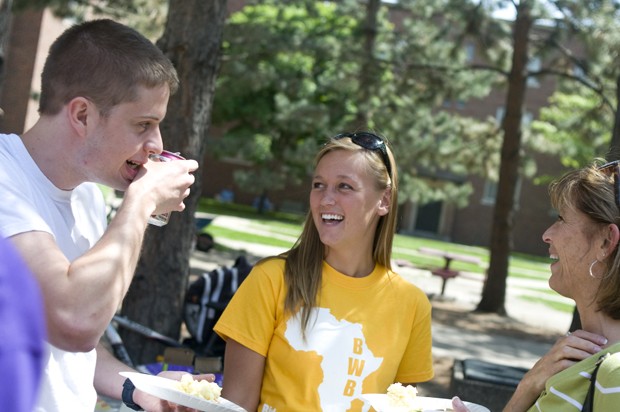 Former Biology Without Borders president Jenna Racine, middle, talks with Jan Swan, right, and Peter Swan at a picnic Thursday before departing to the airport.

Sixteen students from the University of MinnesotaâÄôs Biology Without Borders student group are in Tanzania and Kenya to help build a rainwater collection system for a school, volunteer at maternity hospitals and give clothes and more than 100 pairs of specialized sunglasses to albino children. Hours before the students left for their month of humanitarian work, nervous parents gathered with them for a picnic last Thursday. Teresa Stadem, whose son, biochemistry sophomore Paul Stadem, is going to Tanzania, said itâÄôs an âÄúawesome adventure, but IâÄôll miss my son.âÄù âÄúSeeing how other people live and learning their culture is a necessity that everyone needs to experience,âÄù Paul Stadem said. âÄúIt is a great opportunity for me to expand my cultural horizons.âÄù The group hopes to raise awareness around the issue of albino children who are being abducted and hacked to death because of their skin color, said Jenna Racine, who recently graduated from the University with a biology degree and will attend Michigan State UniversityâÄôs College of Human Medicine in the fall. Racine, who was the president of the organization for the past two years, is traveling to Tanzania for the third time. People with albinism have little or no pigmentation in their skin, eyes and hair. Albinos must limit their exposure to sunlight because their skin is very sensitive to it. The students have collected long-sleeved shirts, pants and sunglasses to protect the skin and eyes of albino children in Tanzania, Racine said. Racine didnâÄôt know there were albino children in Africa before going there, but her past interaction with them is what inspires her to return. She has been planning the trip for the past six months. In addition to the rainwater collection system, the group will create a garden near an all-girl secondary school in an effort to help it be more self-sustaining. At the maternity hospitals, the students will clean beds and help new mothers move their belongings after being discharged from the hospital. During the last two trips to Tanzania, the group built a new house for a mother and daughter whose home was destroyed by rain. They also collected and analyzed data for a diabetes-awareness project. When it was formed in 2006, Biology Without Borders was designed to provide biology students with local and international volunteer opportunities. The group has since expanded to include students from other backgrounds. The groupâÄôs long-term goal is to become a national organization, like Engineers Without Borders, Racine said. The group has expanded its international outreach over time. In addition to this trip, members will spend this yearâÄôs winter break in Peru where they will work to alleviate domestic violence, which is a huge problem there, Racine said. Unlike in year past, this yearâÄôs trip to Africa will include a stop in Kenya, where the group will help relocate homeless people in rescue centers. The students raised about $500 per person through fundraising events for the trip, said Sue Wick, a University plant biology professor and the groupâÄôs faculty advisor. Each plane ticket cost about $1,600, she said. Stephanie Perry said she supports her son, biochemistry junior Dan Perry, but is âÄúa little nervousâÄù because itâÄôs his first time traveling internationally. The students will communicate with their families and friends back home by keeping a blog, which should calm parentsâÄô nerves, Wick said. Going to Tanzania doesnâÄôt seem real yet, Perry said. âÄúI canâÄôt imagine being there,âÄù he said. âÄúOnce I am there, it will probably hit me.âÄù