Stony Brook University Provost Eric Kaler emerged as the only finalist out of 148 applicants. 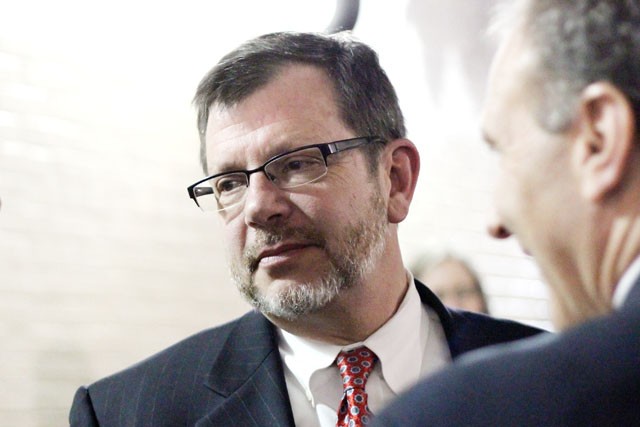 Eric Kaler, provost at Stony Brook University in New York, has emerged as the sole candidate to replace Bob Bruininks as the University of MinnesotaâÄôs 16th president.

Kaler will return to the University where he received his Ph.D. in 1982 to make public appearances Wednesday and Thursday. If the appearances go well, Kaler, who was named a finalist by the Board of Regents on Friday, could be appointed by the end of the week, Regents Chairman Clyde Allen said.

“I think the regents felt he was the candidate that stood out above all the others,” Allen said.

Four semi-finalists, whose names had been kept private, were forwarded to the board for consideration as finalists. Two candidates who didnâÄôt wish to be considered publicly among a pool of finalists withdrew from the search to avoid having their names made public.

Of the two remaining candidates, the board chose to invite only one, Kaler, to campus for interviews.

Kaler, who colleagues described as a talented academic and decisive leader, said he watched his approval as a finalist online from his office in Stony Brook.

If chosen as president, Kaler said his goal would be to make the University a national destination for students.

Although Stony Brook is smaller than the University of Minnesota âÄî it has roughly half the students âÄî Kaler said his leadership style would stay the same as president.

“IâÄôm a consultative kind of guy,” he said. “I anticipate involving students and faculty and staff in decision-making.”

The UniversityâÄôs search consultant firm contacted Kaler in August, and he said his strong ties to the University were a big reason he applied.

“It was an enormously transformative place for me as a graduate student,” he said. “When you lay that against the fact that itâÄôs really one of the best institutions of public higher education in the country, it was very, very attractive.”

If appointed, Kaler would be the second University alumnus to lead the school as president. The first was Malcolm Moos, who was president from 1964 until 1974.

Born in Burlington, Vt., in 1956, KalerâÄôs family moved around the country often during his youth.

Kaler is also in the National Academy of Engineers, a 1,000-member group considered one of the top honors in engineering.

Robert Kelly, a professor in the Stony Brook computer science department who helped recruit Kaler to become provost in 2007, described him as a talented researcher who excelled at finding project funding.

Brookhaven “is a leading national laboratory,” and this research experience makes Kaler a good fit for the presidency, said Frank Bates, chairman of the UniversityâÄôs chemical engineering department, who has known Kaler for 25 years.

Research is a critical part of a schoolâÄôs mission, Kaler said, and he believes the University can become a “powerhouse” in the area.

“The University is first and foremost a research institution,” he said. “We have to be excellent at delivering the research mission.”

Because KalerâÄôs background is heavily science-based, Stony Brook officials considered whether he would be able to lead and support the liberal arts before making him provost, Kelly said.

“We had no issues,” he said, “and my sense of interacting with him is that he would have no problems with it at all.”

Kaler called the liberal arts “the reason there is a university,” and said educating students about the world and about themselves is at the heart of what a university should do.

At Stony Brook, Kaler helped lead the school through economic difficulties and budget cuts similar to those recently faced by the University of Minnesota.

Michael Chajes, current dean of the College of Engineering at the University of Delaware, described Kaler as a decisive leader who dealt with inquiries and issues quickly.

“HeâÄôs very good at analyzing the situation, hearing all sides of it, and then fairly quickly and decisively being able to make a good decision,” Chajes said. “He didnâÄôt let things sit for very long.”

On Wednesday afternoon, Kaler will participate in a public comment and question session at Coffman Union that will be streamed online.

Kaler will also meet with various groups like the student government, the Faculty Consultative Committee and various deans and administrators during his visit.

The Board of Regents will hold an hour-long public interview with Kaler on Thursday morning at McNamara Alumni Center.

Regents Chairman Clyde Allen referred to the visit as a “final-check up” with the campus community before naming a president.

“Here is the candidate that the board wants,” Allen said. “Is he as good as we think?”

FridayâÄôs meeting was the first time the full board gathered to discuss the candidates, and for much of the discussion members referred to candidates by letter designations to protect their privacy.

The announcement comes after a five-month search process where a 12-person search advisory committee considered 148 applications.

Allen said the search included a diverse pool of applicants, including 44 women and at least 12 minority candidates. All four of the semi-finalists were external candidates with strong administrative backgrounds and the pool included both men and women, Allen said. All had previous Big Ten experience as either professors, administrators or âÄî in KalerâÄôs case âÄî as a student.

Regent Dean Johnson said he had some reservations about naming only one candidate and acknowledged some criticism could be leveled at the University because of the process.

Johnson said Kaler has a strong rÃ©sumÃ© and is a solid candidate on paper, but interviews are needed to determine if he is a good fit for the University.

“This is not a done deal,” Johnson said.

Regent John Frobenius said he was impressed with KalerâÄôs range of experiences and his ability to make decisions while working and communicating with different constituencies.

“This candidate has demonstrated the leadership skills to take on new areas of responsibility,” Frobenius said. “[His] style seems to use humor and energy to listen well and communicate.”