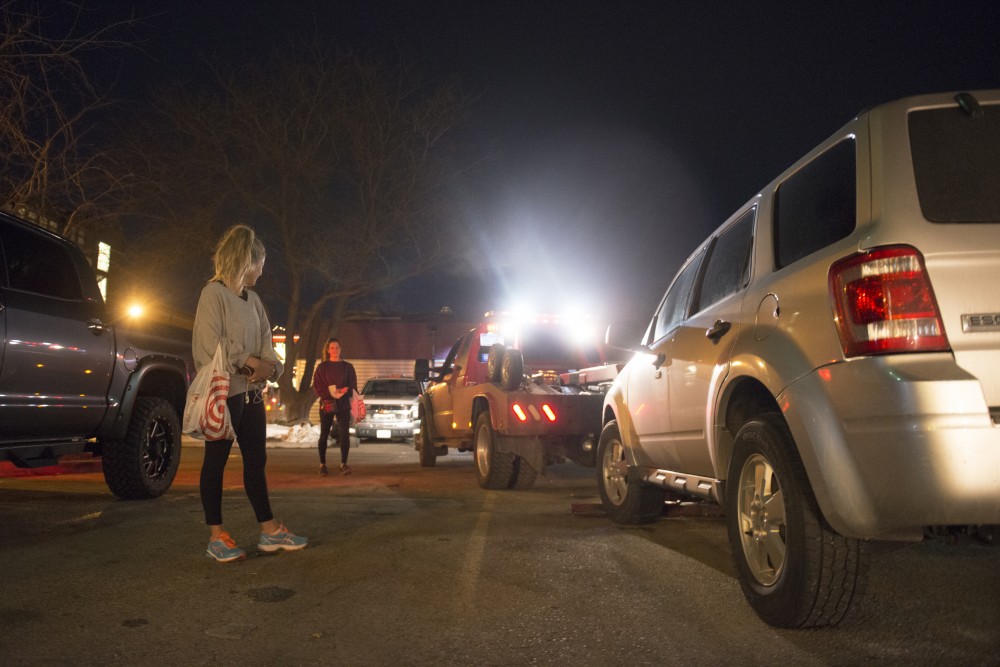 Jess Pilarski and Jesse Justice's car is let go after it was attempted to be towed outside Subway in Dinkytown.

The Minneapolis Police Department is wary of a recent spike in auto thefts in Marcy-Holmes, which officers believe are the result of criminals utilizing tow trucks.

Officers suspect auto thieves are using tow trucks to inconspicuously steal cars and sell either the car or its parts to make a profit. The police department is unsure of the tow trucks’ origins, but is investigating several leads to try to uncover the suspects.

As of July 30, seven auto thefts were reported in Marcy-Holmes since the beginning of June.

MPD spokesman John Elder said one theory is that the stolen cars are going to an auto shop to either be dismantled and sold for parts or are being “VIN-switched.”

A VIN, or Vehicle Identification Number, is a unique number present on every car. Thieves may replace the traceable, stolen VINs with fake numbers to re-sell the cars to unsuspecting buyers.

Another theory is that cars are sold to scrap yards and destroyed without excavating individual parts, eliminating evidence.

Several criminals have been arrested in the past by scrap yard workers who have checked the MPD stolen vehicle list. Ostland said he hopes workers will continue to take notice given the rise in thefts.

This type of auto theft is not new to the area. Emilie Quast, a board member from the 2nd Precinct Advisory Council, said similar thefts were committed by a team of thieves in Prospect Park in past years.

She noted the surprising swiftness of the robbers who were easily able to load up a car on their truck, even in snow.

“They were observed in action [by a witness] on a street in Prospect Park and had the target car off the street in less than five minutes,” Quast said.

In response to the recent thefts in Marcy-Holmes, Elder said MPD has heightened patrols and distributed crime alerts in the area. Officers are aiming to reach residents to make them aware of the crime trend, he said.

On July 25, Ostland presented information to residents at the 2nd Precinct Advisory meeting. Residents should be wary of their surroundings, he said, and should report any suspicious sightings of tow trucks driving through neighborhoods.

Many thefts have occurred when residents leave car keys in the center console or in the sun visor. Additionally, car owners should make sure to lock up their car and remove sets of spare keys, Ostland said.

Cody Hoerning, Southeast Como Improvement Association board member, is using social media to inform residents of the trend who may not attend local meetings. His notice on Nextdoor, a neighborhood app, trended in mid-July.

He said he decided to make the post after his own car was stolen in Marcy-Holmes.

“I have a vested interest in the investigation,” Hoerning said.