Minnesota is the No. 7 seed in the NCAA tournament and plays at the Maturi Pavilion at 7 p.m. Friday. 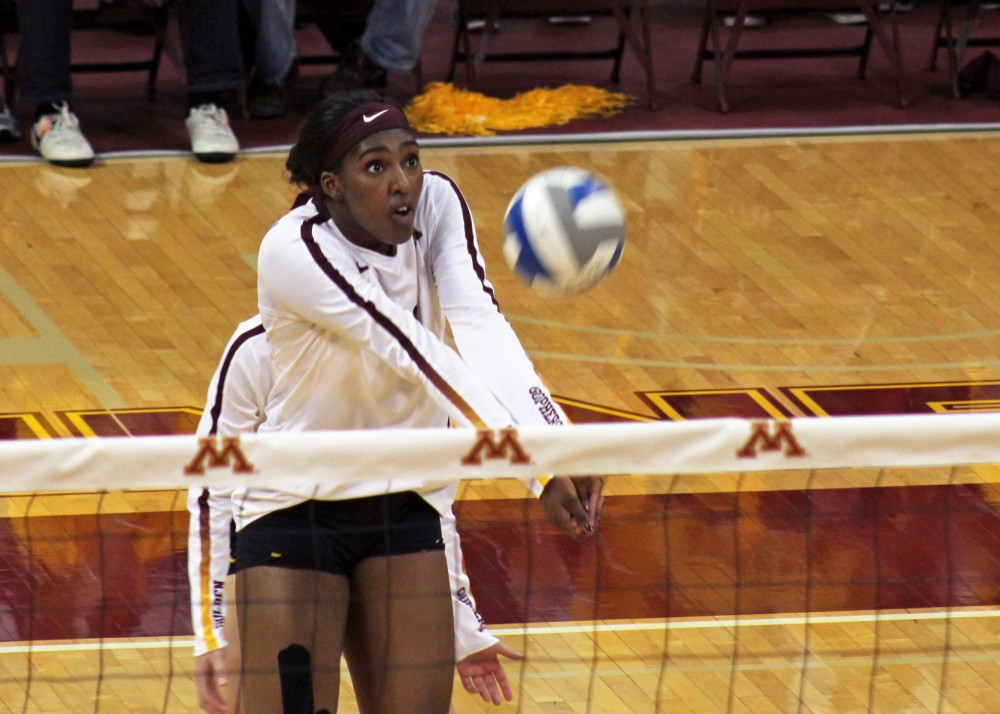 Opposite hitter Stephanie Samedy hits the ball against Wisconsin at the Maturi Pavilion on Saturday, Oct. 21.

Minnesota is trying to reach the Final Four for the third consecutive season when it takes on North Dakota at 7 p.m. at the Maturi Pavillion Friday in the first round of the NCAA tournament.

The No. 7 Gophers have been relying on strong play from their underclassmen this season. They don’t have as much experience as previous teams, however, their youth has provided them with an unknown ceiling.

“Mainly, because they’re a little younger than the last couple of years, they have a greater capacity for improvement,” head coach Hugh McCutcheon said on Nov. 21.

If Minnesota avoids an upset and defeats the Fighting Hawks Friday night, it will host Louisville (24-6, 18-2 ACC) or Northern Iowa (26-8, 14-3 Missouri Valley Conference) on Saturday at 8 p.m.

Minnesota’s attack is led by freshman Stephanie Samedy and sophomore Alexis Hart. Samedy leads the Gophers in kills with 447. Right behind her is Hart with 403. As a team, the Gophers are averaging 14.6 kills per set, 13.7 assists per set and 2.5 blocks per set.

If Minnesota is going to extend its season, it will need to be better than they have been recently. The Gophers have lost three of their last six matches.

Minnesota’s opponent on Friday evening has won its last five games. The Fighting Hawks won the Big Sky Conference tournament on Nov. 18 and haven’t played since. North Dakota’s offensive attack is a balanced one. Four Fighting Hawks have more than 300 kills this season. Faith Dooley leads them with 414 kills. Collectively, the Fighting Hawks are averaging 13.5 kills per set, 12.7 assists per set and 2.7 blocks per set.

Whatever team wins on Friday will have a tough opponent in the round of 32. Louisville hasn’t lost in more than a month. A win on Friday would be mark its 12th consecutive victory. Louisville is led by Melanie McHenry, who has 400 kills this season. The Cardinals are averaging 13.6 kills per set, 12.7 assists per set and 2.3 blocks per set.

Louisville’s opponent on Friday — Northern Iowa — has won six of their last eight matches. The Panthers have three players with more than 400 kills. Piper Thomas leads them with 495 kills. As a team, the panthers average 15.3 kills per set, 14.2 assists per set and 1.9 blocks per set.

The journey back to the final four starts Friday at Maturi Pavilion with Northern Iowa playing Louisville at 4:30 p.m. and Minnesota playing North Dakota at 7 p.m. The winners will face each other on Saturday.