U student group: UMN should declare a climate crisis, divest from fossil fuels 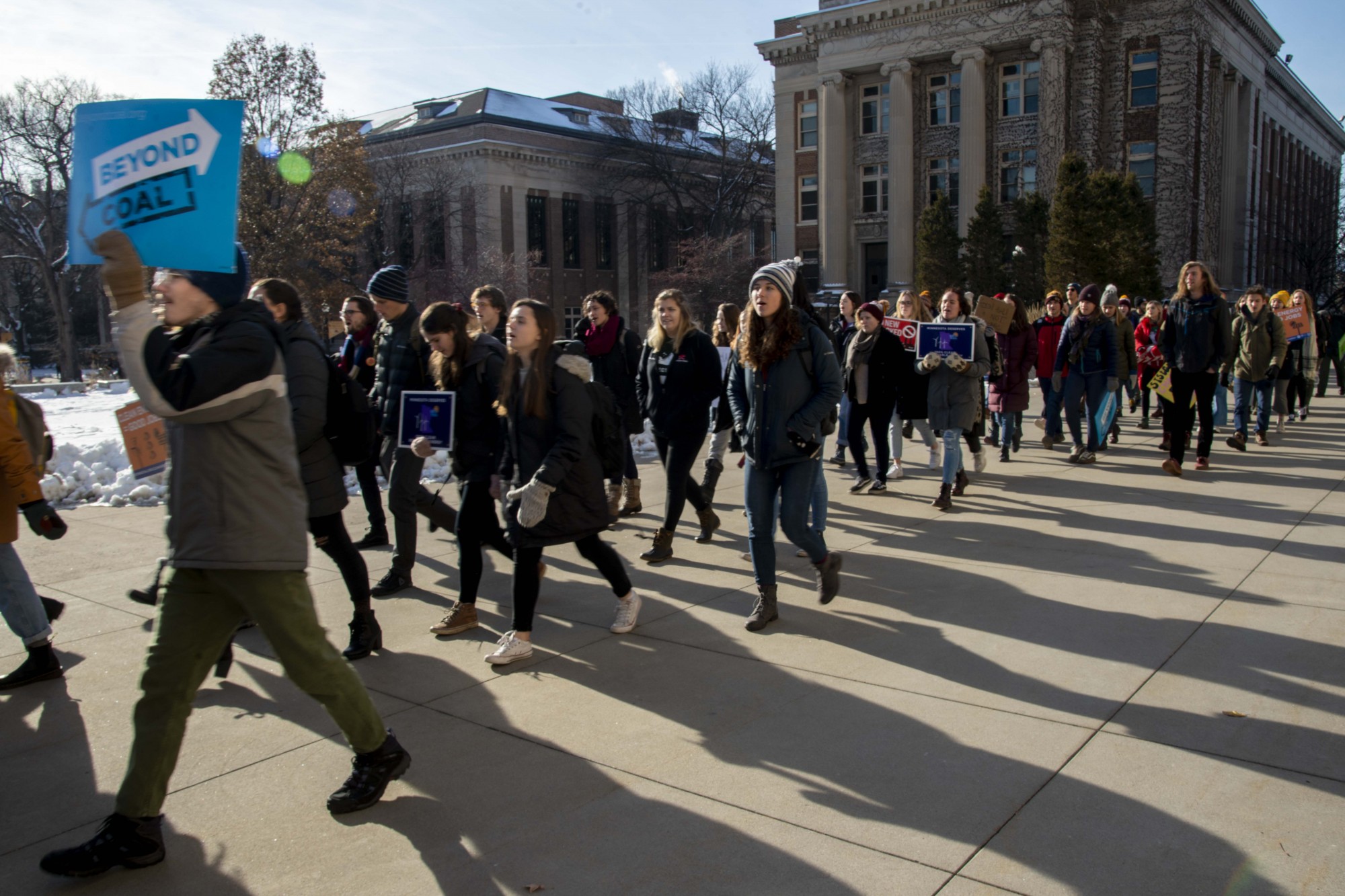 Students and faculty march towards Morrill Hall as part of the UMN Climate Strike on Friday, Dec. 6. Those in attendance criticized the University’s policies on fossil fuel usage.

A new University of Minnesota student group held a march Friday to demand the University divest from fossil fuels and do more to address the climate crisis.

A group of more than 50 students and community members marched across campus to Morrill Hall, the location of University President Joan Gabel’s office, to bring attention to their demands. The University’s Minnesota Climate Strike student group, a branch of the statewide initiative, insisted the University declare a climate emergency, create a new climate and environmental justice major and cut ties with the fossil fuel industry, among others.

The group intended to hold a sit-in at Gabel’s office, but on arrival found Morrill Hall placed on lockdown as the sit-in “would be disruptive” to campus activity, according to University of Minnesota Police Department officers present at the time. UMPD officers blocked students from entering the building.

The group then eventually dissolved, with leaders encouraging students to attend other climate protests taking place in St. Paul the same day. Along with Friday’s march and attempted sit-in, organizers delivered a list of demands to the University, including requests such as divesting from fossil fuels and the creation of a climate and environmental studies major. The request for the major builds off of work from other students, including the group Voices for Environmental Justice.

Along with these demands, the group requested the University declare a climate emergency, which the Minneapolis City Council did earlier this month. Making this kind of declaration acknowledges that not enough is being done to address climate change and gives entities more power to help with the issue.

The idea for the new student group came about because some wanted to make the climate movement more accessible to students.

“We want to bring this to campus so it is easier for students to get involved locally,” said Kat Schmid, one of the organizers of the new student group.

In response to the students’ demands, the University reaffirmed its work to reduce emissions and promote sustainability.

“The University has a long-standing commitment to sustainability with one of higher education’s first comprehensive sustainability policies. For more than a decade, we have been putting these policies into action by integrating sustainability into teaching, research, outreach, and operations,” the University said in an email.

These policies include the University’s goal to offset 100 percent of the campus’s greenhouse gas emissions by 2050.

Leaders of the student group said while the University’s goals of reducing emissions are good, it needs to be more transparent about its actions and progress.

The University has reduced almost 40 percent of its emissions since the plan was rolled out in 2011.

Along with transparency, the student group’s leaders say the University’s It All Adds Up campaign, which encourages campus community members to do things like turn off lights when leaving a room, puts the responsibility on students. They argue most emissions are coming from fossil fuel corporations.

“Those little things are great, but what we are focused on is making that system levels change,” Schmid said.

Experts say the process for the University to divest from fossil fuels would take about five years.

“That’s where students and others who are going to demand that you do the right thing need to hold [the University] accountable for an aggressive timeline,” said Brett Benson, communications director for MN350, an organization dedicated to sustainability. “We don’t have that kind of luxury of time. We won the battle for public opinion around the climate crisis. Now we just need to translate that into winning on public policy.”

While the student group is still in its early stages, organizers are planning on holding more events next semester to help gain community support and encourage the University to do more regarding the climate crisis.