Are you ready to Rockville?

Everything "Gossip Girl" producer Josh Schwartz touches turns into television gold. Will that success transfer to the Internet? 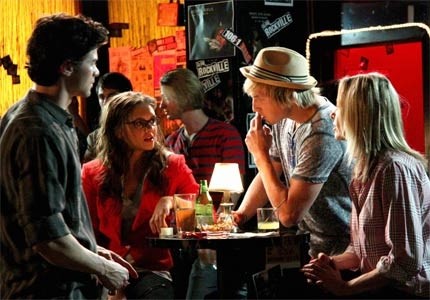 âÄúRockville, CAâÄù PRODUCER: Josh Schwartz STARRING: Alexandra Chando, Andrew West WHEN: Tuesdays WHERE: www.thewb.com Here is some pop culture math: Take Josh SchwartzâÄôs late television show âÄúThe O.C.,âÄù divided by Mischa BartonâÄôs skeletor angst, minus sunbathing and Peter GallagherâÄôs eyebrows, times the way-cool hangout The Bait Shop. What could that possibly equal? Nothing less than the new webcast television show by the WB , âÄúRockville, CA.âÄù Set entirely in an indie-rock venue in East Los Angeles, âÄúRockville, CAâÄù is about the complex parallels between vying for love and getting a hipster band off the ground. Each show features the performance of a different team of shouting songsters, like the oh-so-Swedish Lykke Li , Passion Pit and The Republic Tigers [along with some indie bands from angsty teen dramas past, like Phantom Planet and The Kaiser Chiefs ]. Alexandra Chando , who plays Deb, a young rep that signs bands to a big-name record corporation, says âÄú[the show] is such an innovative idea. [The website] is completely interactive.âÄù Chando is no newbie to the television scene. Last year, she nabbed an Emmy nomination for her work on âÄúAs the World Turns.âÄù She says that though most of the cast felt the taping took place quickly [a full season in a little over a month], âÄúthis is slow compared to âÄúAs the World Turns,âÄù but the quality is different. [The cast] had the luxury of taking as much time as we needed.âÄù Since scenes are set in an actual music venue, the production was rushed along so bands could set up before their actual evening performances. Andrew J. West (âÄúPrivileged ,âÄù âÄúGreekâÄù) is introduced in the showâÄôs trailer as Hunter, the clubâÄôs âÄúresident music geek,âÄù to which he responds, âÄúWow, what an incredibly sexy introduction. In-house eunuch wouldnâÄôt suffice?âÄù Let the snappy sarcasm ensue. When speaking of the showâÄôs speeding production, West says, âÄúWe were doing five pages a night of script, but it was never too overwhelming. When youâÄôre working, you fall into a groove.âÄù âÄúRockvilleâÄù centers its focus on the warring love-hate relationship between the two music enthusiasts, but also includes a few nondescript side-characters, who reel us into their love toils as well. The two âÄúRockvilleâÄù stars are no strangers to indie music. West cites White Lies and The Kooks as some of his current favorite bands. Chando sings praises of Dave Matthews Band and Radiohead . Though he hadnâÄôt heard of many of the bands before production began, West says, âÄúSome of them have turned out to be my favorites.âÄù The showâÄôs main love tension between Deb and Hunter most likely takes the entire first season to develop, but with witty banter between two abrasive Seth Cohen lookalikes, itâÄôs a wait that seems enjoyable. But will the season finale complete the love-music parallel? Do marriage vows equal record deals? WeâÄôre still waiting on that geometric proof.