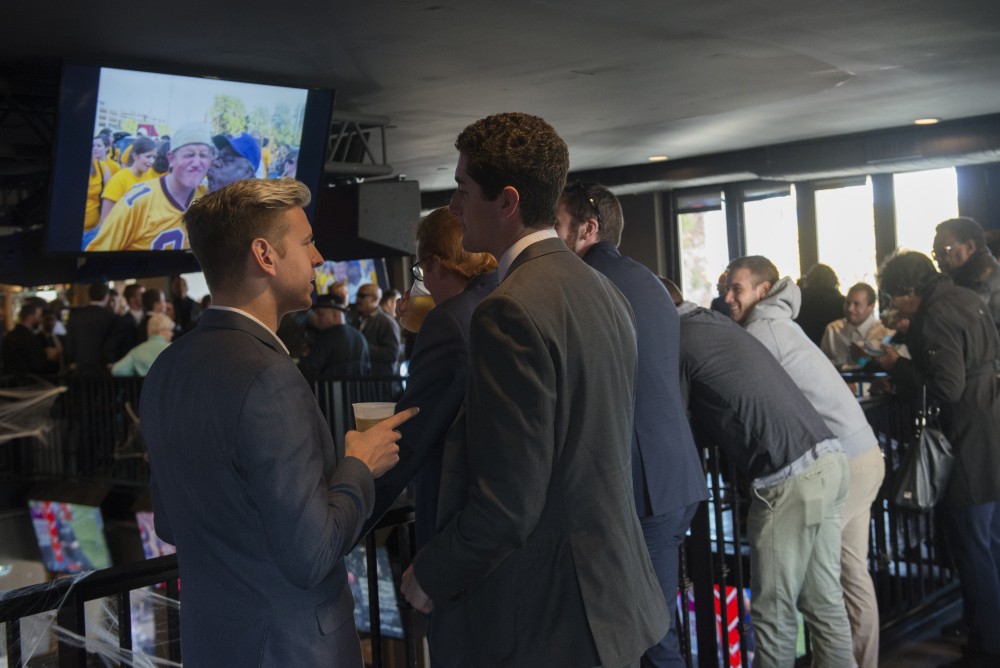 On Saturday afternoon, over 100 people gathered at the Pourhouse in Uptown to celebrate the life of Sigma Phi Epsilon’s beloved and oldest chef.

Aloma “Gib” Gibson died earlier this month at 76 years old after battling lung disease. Past and current fraternity members, family and friends gathered to remember Gibson, who was a chef at the fraternity house for 23 years.

“He [had] a unique relationship with the kids in the fraternity. … [The members] invited him to their weddings, they brought him to all the fundraisers,” said Heather Essig-Reinhart, who hired Gibson and introduced him to the fraternity two decades ago. “He was just a part of the fabric of the fraternity and the Greek system. Everybody knew him,” she said.

With pictures and videos of Gibson displayed on televisions around the bar, attendees at the Pourhouse spent the afternoon laughing, talking and reminiscing about Sigma Phi Epsilon’s longest-serving member. Maurice Tyner, Gibson’s cousin, said the chef wanted people to laugh about him at his funeral, not cry.

He was one of the guys

During the more than two decades he spent with the fraternity, current and past fraternity members said Gibson did more than cook for the group. Gibson was just like one of the members, as he attended fundraisers and University homecoming events with fraternity members.

According to fraternity members, Gibson chain smoked on the Sigma Phi Epsilon house’s porch and loved brandy. He liked to wear a cowboy hat and would watch old Western films with fraternity members in between meals. For work, Gibson wore a chef’s outfit, complete with a tall, white hat.

Much of Gibson’s likable personality came from his one-liners and the conversations he had with members of the fraternity, many said at the event. Gibson had popular lines members recognized, like “I don’t see races, I see faces,” and “Tell your mom, ‘Hi.'”

Although Gibson liked the fraternity members, he would seldom say it to them. Sophomore Jonathan Wells recalled an instance when he overheard Gibson say he liked him. When Wells asked him about this, Gibson got upset.

“He started cussing me out more than I’ve ever heard,” Wells said. “If he told somebody that he really liked another kid, he’d be like: ‘But I’d never tell him that.’”

“Whatever came to his mind — he had no filter — he said it. If he loved you, he cursed you out. He expressed [his love] through probably not the best words, but you felt it,” said Cole Christenson, a sophomore in the fraternity. “He wouldn’t want you to know that he loved you.”

Alumni of the fraternity reminisced about the nicknames Gibson gave them. One member was called “carrot top” for having red hair, and another member was “old creeper” because Gibson said he looked old.

Prior to working at the fraternity, Gibson spent part of his life as the singer of his touring band, Little K and His Internationals.

After Gibson died on Oct. 5, a GoFundMe page was started to cover funeral expenses. According to a status update from the webpage, 80 percent of the $11,250 goal had been reached four days after the fundraiser began.

“He was awesome,” said Gibson’s daughter Anatha Kaye. “He was a big light. The fraternity was a blessing.”

“He loved [all the fraternity members] for all 23 years,” Kaye said.