I lived at IKEA for a day … here’s what happened. 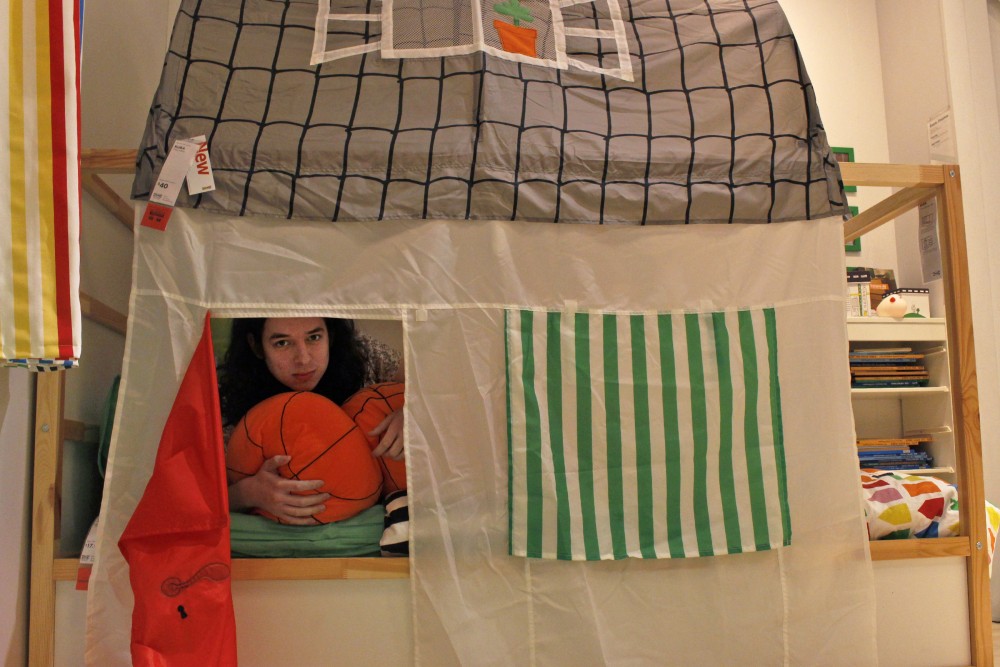 Minnesota Daily reporter Joe Christo on the KURA bed in the children's section at IKEA in Bloomington on Tuesday, Oct. 11. 2016.

For young millennial adults, IKEA provides the perfect balance of playground and ready-to-assemble maturity. The funny-named furniture is consumable, the food is cheap and everything in the store is arranged so that you can test it out.

… So I did, by spending a Thursday walking around IKEA as if it was my home. I had to bring a friend though, so it wasn’t weird and dismal — it was cute and sweet.

(Note: I live in a closet, so any chance to pretend like I’m not stuck in a proverbial jail cell — even for a few hours — I’ll take.)

IKEA’s floor plan is described as a “one-way layout.” This means that each section of the store leads into the next like it’s one big dystopian adventure.

Getting lost in the light aisles was a trip. I noticed a couple shopping for their first apartment together a la “(500) Days of Summer.” They had ugly gray rugs with ugly white circles in their cart.

The boy suggested they buy a weird light — a large impractical spotlight that would literally take up an entire room. The girl pointed out this obvious fact, and the boy marched away in a huff.

After getting bored of stalking the fractured couple, we stumbled over to the children’s furniture section. Here we found a little boy in a power ranger costume terrorizing his sister, his parents, other customers and us.

Mixing movie franchises, he batted a lightsaber at his younger, curly-haired sister.

The boy then threw a fit about an end table modeled after a fire truck. You read that right — besides the impracticality of the piece, it was obviously meant for a much younger child.

The little tyrant threw his costume mask across the showroom and rolled around until his mother caved and gave him a lollipop. The sugar fiend dropped his lightsaber and sat quietly.

We left the family and followed the arrow road to the plant and candles section. No one was browsing the selection of reasonably-priced junk except two middle-aged moms wearing loose cardigan sweaters.

There was a sale on autumn-scented candles (whatever that means) and ferns. A few were lit, and the scent can only be described as “garbage bag filled with burning leaves.” The two women pushed an extra cart just to fill-up on fall “goodies.”

We continued on (mostly because the smell of vanilla makes me want to puke).

After lying in beds, couches, and tables, it was time to try the admittedly gross-looking food.

Everything in IKEA’s restaurant is cheap. If you go before 11 a.m. you can get eggs, sausage and hash browns for $1. One of the most popular options — meatballs with a side of fries and lingonberry jam — is $4.99. And the portion is huge.

I honestly thought there was no way I would like the meatballs; they were far better than they should be. Chewy and bland, but edible.

Families gathered around tiny plates with tiny forks to eat tiny meatballs with huge, goofy smiles on their faces. Novelty is enough to send a family of otherwise bored cave-dwellers into a euphoric frenzy.

For dessert I tried the Swedish almond cake which was only $1.29 and actually quite good. The $0.50 hot dog sounds like some nutritional war-crime, but it was fine (especially considering the price).

We left having spent less than $10 on food and passed on the prefab decor. My friend wasn’t impressed with the day, and honestly, neither was I.

Maybe next time we’ll just go to an arcade.