Diagnosed with leukemia in 2010, Connor Cosgrove is starting fresh. 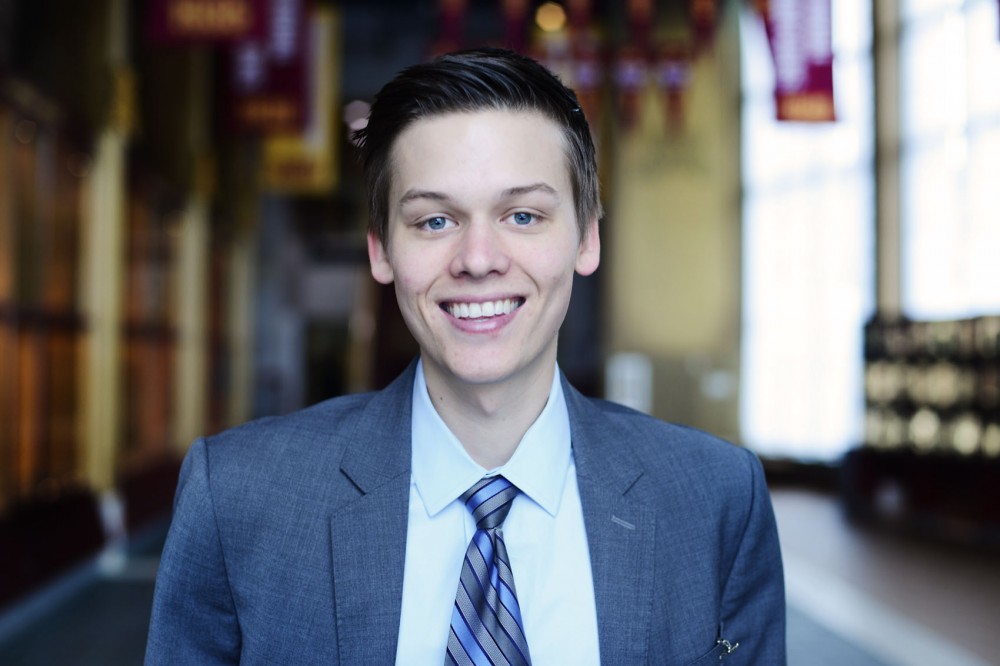 Connor Cosgrove, a member of the University of Minnesota football team, was diagnosed with leukemia in September 2010. Cosgrove will have his final chemotherapy treatment Friday.

Connor Cosgrove has the most important day of his life stenciled on a sticker in his room. It’s lost some of its adhesive over time, but the meaning has never faded.

And now it’s only two days away.

After a three-year battle with leukemia, Cosgrove will go through his final chemotherapy treatment Friday.

“I’ve literally thought about this day every single day through this entire process,” he said.

Cosgrove, a business and marketing education junior, was diagnosed with leukemia Sept. 14, 2010, and Friday marks a new beginning for the 22-year-old.

“I’ve heard that it can be very anticlimactic for some, but I don’t think it will be for me,” he said. “It signifies everything I’ve accomplished and everything I’ve gone through.

“I hope they at least give me a sticker or lollipop or something,” he joked.

It’s been a long, arduous road for Cosgrove — a road that has forced him to grow as a person.

“It’s been a gift in a weird way because I want more out of my life than I did before,” he said.

Cosgrove still remembers the day of his initial diagnosis down to the minute details — the clothes he was wearing, the body language and tone of his doctors, and his parents’ places in the hospital room.

His mother, Shelly Cosgrove, stood at the foot of the bed while his father, Kevin Cosgrove, sat in a chair next to him. When the doctors walked in, Cosgrove said he could tell immediately that it wasn’t good news.

“They just kind of dropped the bomb,” he said. “It was a feeling of immediate numbness.”

Cosgrove said it took him a while to accept the illness, but he said once he did, he used it as a tool to make a difference.

He has helped with various foundations in the past three years and has become a spokesperson of sorts for those with cancer.

“I’m 56 years old, and I haven’t done a fraction of what he’s done in his life,” Shelly Cosgrove said. “It’s been a long process, but he has made the most of it. There would have been no other way for him to get through it without helping others through it.”

A normal leukemia treatment timetable takes about three years — six months of heavy-duty treatment and two and a half years of monthly treatments.

Brandon Haney, one of Cosgrove’s best friends, was in the room the day Cosgrove was diagnosed. He said the diagnosis was shocking at first, but he tried not to bring it up much when the two were together.

“I would just try to be a friend there to get his mind off of it,” Haney said. “We would play video games and just do stuff we would do in our apartment — just it was in a hospital room.”

Cosgrove said he had his share of bad days throughout his three-year battle with leukemia. Haney said he’s seen his friend on some of those days, but he said Cosgrove always took it in stride.

“He was definitely the rock through it all,” Haney said. “He was always the strongest person with everything and always the most positive one.”

Shelly Cosgrove has missed only two of her son’s treatments. She and Kevin Cosgrove will both be there Friday for the final treatment.

She said it will be surreal walking out of the hospital Friday afternoon.

“It is scary because it’s like, ‘How do we move forward now?’” she said. “This has been our focus for the last three years.”

The buildup to his final treatment has been long awaited, Cosgrove said, but in a way, he doesn’t know if he’s ready for it.

“[Leukemia] will always be a part of who I am in my past and in my future, but to have it not be a part of my present will be a relief,” he said. “It’s also terrifying at the same time because it’s all I know.”

Shelly Cosgrove said although it was tough to see her son with cancer, it’s hard to imagine life without it.

“There is a lot of bad that has happened, but I believe the good that has come out of my illness … is so much greater than the bad,” Connor Cosgrove said.

Haney said Cosgrove’s attitude during the last three years has influenced him.

“It definitely gave me a new perspective on life,” Haney said. “It’s hard for me to ever complain about anything in my life now, because whenever I’m having a bad day, I know it’s nothing compared to what he’s gone through.”

Cosgrove still has to finish his last cycle of medication, but after Friday, he never has to go in for another treatment.

“I know this Friday will be the best day of my life,” he said. “I’ll be smiling all day because it’s more than just a final day of treatment for me. It’s the start of my new life.”