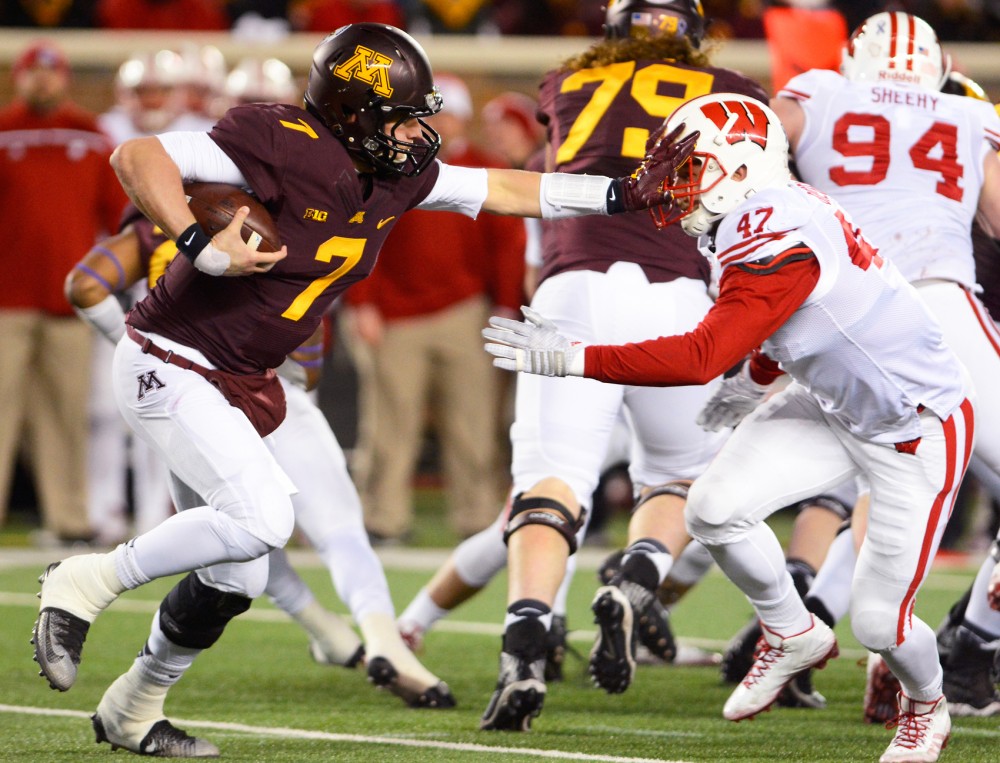 Minnesota quarterback Mitch Leidner faces pressure from Wisconsin while running the ball at TCF Bank Stadium on Saturday where the Gophers fell to the Badgers 31-2.

Running back Rodney Smith had a great start to the season, and has rushed for over 100 yards six times. Lately, Smith has been less than stellar. He only has 85 yards on 33 attempts in his last two games as he has struggled with facing tougher Big Ten rushing defenses.

Smith and the rest of the Gophers’ rushing offense have put up small numbers recently compared to what the team did at the beginning of the Big Ten schedule. The group averaged 201.3 yards a game in their first six conference games but are only averaging 108 in their last two.

It won’t get any easier against Wisconsin. The Badgers have the best rushing defense in the Big Ten, as they are the only team that allows less than 100 rushing yards a game. Teams have broken through against Wisconsin, but it’ll be hard for Minnesota with its recent troubles.

When Wisconsin runs the ball:

Wisconsin is known for its rushing offense, and this year isn’t any different. The Badgers are one of three teams in the Big Ten averaging over 200 yards a game, and they run the ball almost 50 times a game on average.

Corey Clement is the one leading the charge. The senior running back will likely be an all-Big Ten selection as he has the third most rushing touchdowns in the Big Ten and averages the second most yards a game.

Minnesota’s rushing defense is strong. They’ve limited stronger running backs like Justin Jackson and Saquon Barkley to below their season averages but it could be hard to do the same to Clement Saturday. A healthy defensive line has been huge for the Gophers this season.

Eleven games into the season and Minnesota’s passing offense has only had one standout game, and it came against FCS opponent Indiana State. The Gophers have been running the ball a lot more this season, but the numbers are still low.

Mitch Leidner only threw one touchdown at home against an FBS team this year, and it happened in the final quarter of the last home game. His completion percentage is down from last season, and he’s thrown an interception in three straight games. Leidner has the lowest quarterback rating among qualified players in the Big Ten this year.

Wisconsin’s passing defense is tied for first in the Big Ten with interceptions and has only allowed seven touchdowns, the best in the conference. Both parts of the Badgers’ defense is elite. Leidner may throw multiple interceptions with no touchdowns Saturday.

When Wisconsin passes the ball:

Wisconsin has gone with two quarterbacks this season, but Alex Hornibrook has been the main player lately. The redshirt freshman has one of the lowest ratings in the Big Ten but hasn’t thrown an interception in three November games.

The Badgers aren’t throwing the ball a lot. They have the lowest passing attempts per game in the conference and run the ball quite a bit. Their offense is even more reliant on its running backs than Minnesota’s.

The Gophers’ passing defense hasn’t been able to find a groove all season. They’ve allowed seven touchdowns in their past three games with only one interception to go along with it. Still, Wisconsin doesn’t throw the ball much so Minnesota should be able to limit their numbers Saturday.

Wisconsin’s rushing offense and defense will overpower the Gophers. Paul Bunyan’s Axe will stay in Wisconsin for the 13th straight year.