Running back Smith “perfect” in debut

In his first college game, Smith had a touchdown and 88 yards on 16 carries. 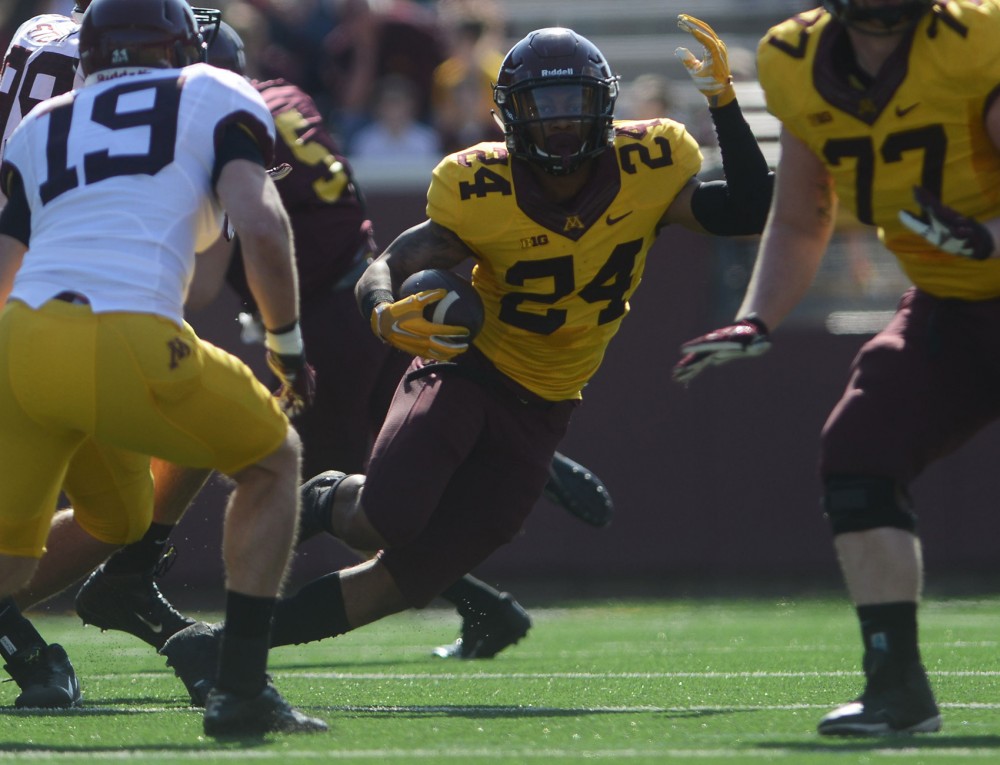 Minnesota running back Rodney Smith runs the ball during the spring game on Saturday at TCF Bank Stadium.

Mike Hendrickson
No one on Minnesota’s offense had a better game last Thursday than Rodney Smith.
The redshirt freshman running back’s marks against No. 3 Texas Christian University came back perfect.
“He’s the only back I’ve had in a long time that played 46 plays, and he graded out perfect,” head coach Jerry Kill said. “[He] never made a mistake. Not in pass protection,
not running the ball, no mental errors … so I’d say he needs to play more.”
Smith rushed for 88 yards on 16 carries and added a touchdown in his first collegiate game, outrushing the rest of his team combined despite the Gophers having 39 total rushing attempts.
With a tough road test coming up against Colorado State, Minnesota’s coaches see Smith’s role expanding.
“I think that he’s proven that he can be a three-down back,” offensive coordinator Matt Limegrover said. “That’s always what you’re looking for is a guy that can tote that rock on first and second down and turn around and stay in there and feel very comfortable.”
In the game against TCU, Smith wasn’t heavily used until a crucial goal line fumble by redshirt senior running back Rodrick Williams in the second quarter. Williams finished the game with just 32 yards on nine carries.
Limegrover also praised Smith’s ability to block pass protection.
“When you have a guy like that at that young age having that awareness, it didn’t surprise any of us what he did Thursday night,” Limegrover said.
For Smith, pass protection has been a focal point of his overall play. Limegrover said the running back gets more upset when he misses a block than when he misses a
cut.
“A lot of people can run the ball, but not everybody can pass-block,” Smith said. “[Running backs coach Pat] Poore stresses with us that if you can pass block, you can definitely play here.”
After Thursday’s game, quarterback Mitch Leidner praised Smith for his fast and explosive abilities. Leidner also added on Tuesday that he wasn’t surprised by Smith’s
performance.
“He did a really good job finding holes and moving the football for us,” Leidner said. “He’s a really athletic kid.”
Smith said big schools such as Georgia, Virginia Tech and Auburn all talked to him during his junior year of high school but fell out of touch after he tore the anterior cruciate
ligament in his knee.
Minnesota, though, stayed in touch with Smith’s father and high school offensive coordinator Patrick Smith.
“He’s the son of a coach,” Limegrover said. “He’s been around [football] his whole life, and you can really see that. I think there’s a great amount of pride in Rodney of being a complete player.”
Before the first game of his career, Smith said David Cobb, Minnesota’s lead back last year and a fifth round pick in the 2015 NFL Draft, texted him and helped him calm down before the game.
“He knew I had the ability,” Smith said. “[He told me] to just go out, wait my turn, and when they put me in, to make the most of my opportunity, read my keys and make plays. That’s what [running backs] do here. [They] make plays.”
Delete Image
Align Left
Align Center
Align Right
Align Left
Align Center
Delete Heading