Simple changes to boat design could stave off the spread of the invasive species’ larvae. 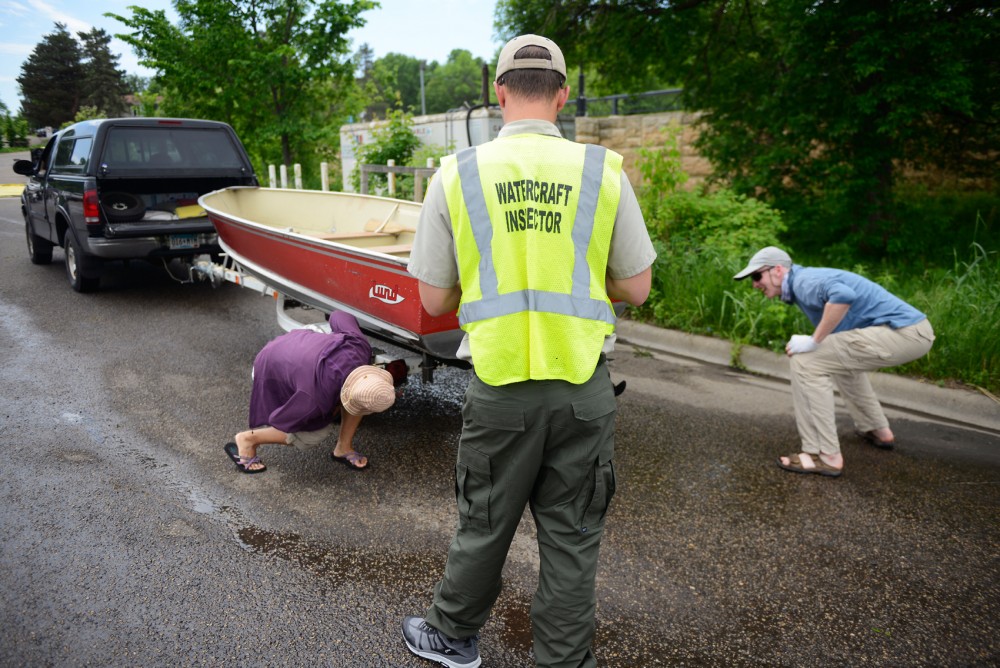 Watercraft Inspector Jack Kronberg, along with the boat owners, inspect a boat for invasive species before it enters the water at Grays Bay on Lake Minnetonka on Memorial Day.

As several Minnesota lakes continue to be infested by zebra mussels, University of Minnesota researchers are helping boat companies understand how humans spread the invasive species.

To help combat the spread of the mussel, the Minnesota Aquatic Invasive Species Research Center, the state Department of Natural Resources and boat companies Tonka Bay Marina and Brunswick Freshwater Group are collaborating on a project to help uncover how zebra mussels spread through water that is left in boats.

“You can think about fishing boats, as each one individually, as a low risk. What we don’t know is if we add it all up,” said Michael McCartney, lead zebra mussel researcher at MAISRC.

Zebra mussels are one of the most widespread invasive aquatic species in the world and are estimated to have caused over $1 billion in economic damage per year. The rapid spread of the mussels can cause strains on lakes’ biological food systems, increase hindrances for boaters and affect cities’ water supplies.

McCartney said that the mussels have several characteristics that separate them from other aquatic species. They attach to hard surfaces with threads — which no other freshwater animals have. They eat by filtering plankton from water, and they have a high reproductive rate.

“These are all things that none of the other freshwater animals can do or do as well,” McCartney said. “They have the ability to completely reroute the flow of food through the lake.”

The mussels have popped up in several Minnesota lakes, including Vadnais Lake in St. Paul.

Adam Doll, who works with McCartney and is also the DNR’s watercraft inspection program coordinator, said the project will analyze the residual water left after people drain their boats to see if it’s a method by which the mussel larvae can spread.

“They could be present in these small amounts of water, so we’re looking to see how often they are present,” he said.

Depending on the results, changes could be made to boat design or inspection protocol, Doll said.

These changes could be simple design adjustments to make inspection easier or to allow boats to drain better, said J.D. Sienicki, the vice president of product development and engineering for Brunswick Freshwater Boat Group.

“Anything we can do to make that less of a hassle for an owner, easier for an inspector to do … that would be a good thing,” he said. But Sienicki said before changes can occur, they need to better understand the spread of the mussels.

Sienicki said that Doll will be invited to tour and speak with engineers at their manufacturing facilities to help improve design of current and future products.

Gabriel Jabbour, Tonka Bay Marina CEO, has partnered with the MAISRC to provide financial support, and said that in the past boat manufacturers ignored invasive species.

He described simple changes to boat design as “low-hanging fruit” and said manufacturers were shown potential updates at a recent invasive species summit in Baltimore.

Jabbour said changes are unlikely to reach all 800,000 boats in Minnesota.