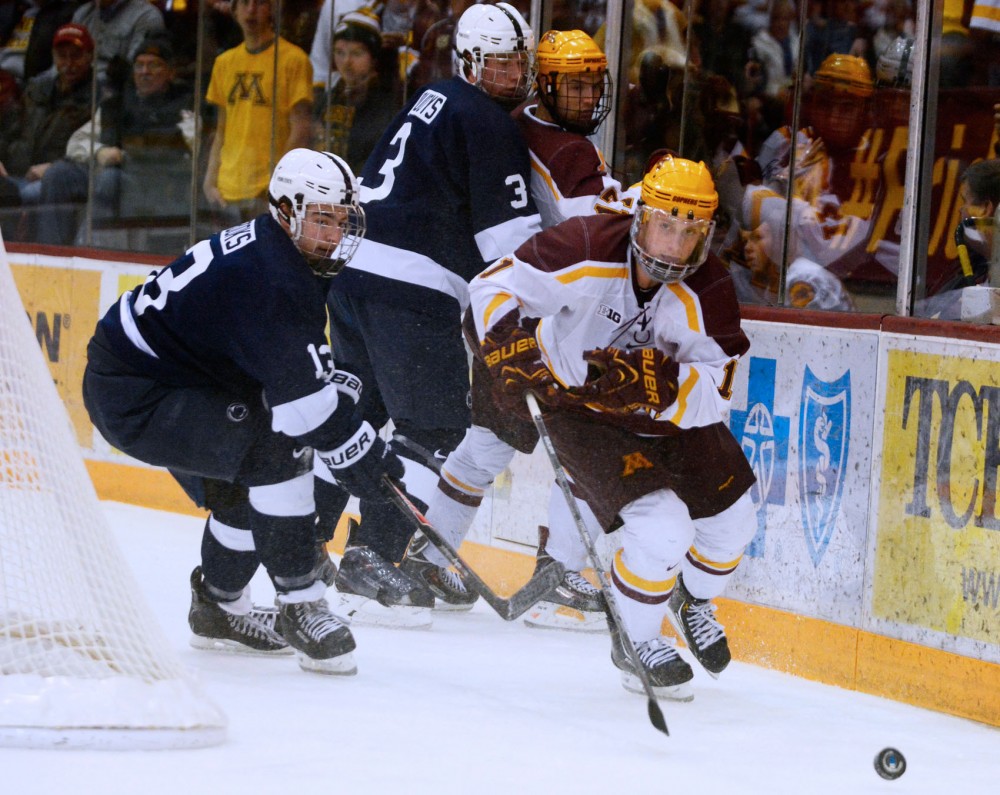 Senior night for the Gophers men’s hockey team could have played out much differently.

While the Gophers completed a sweep of Penn State with a 2-1 victory Saturday after a 5-1 victory Friday, the series-winning goal scorer left the first game with an upper-body injury.

“I think he had a target on me a little bit,” Serratore said.

Serratore returned the favor to the Nittany Lions on Saturday with a game-winning goal to send the seniors out on top.

Gophers head coach Don Lucia said he took Serratore out in the second period Friday mostly as a precaution but still had to evaluate his health before senior night on Saturday.

“It’s funny how it works sometimes,” Lucia said. “We weren’t sure Tommy was going to play until after warm-up.”

It was a serendipitous choice for the Gophers, as Serratore scored the game-winner in the third period.

“You can’t script it any better than that,” Shibrowski said of his teammate’s goal.

Minnesota junior forward Travis Boyd put the Gophers ahead about 13 minutes into the first period Saturday, but Penn State leveled the score shortly before the end of the second period.

Serratore played hero on the night dedicated to his class about 13 minutes into the final period.

“I couldn’t ask for a better moment to end my career here [at] Mariucci,” he said. “It’s going to be a great memory and something that I’ll never forget, that’s for sure.”

While senior night was a nail-biter, Friday’s game was much easier.

Penn State took the lead on the power play about three minutes into the game, but then the Gophers’ first line took over.

Minnesota got goals from all three first-line forwards in the first period. Gophers junior Sam Warning lit up the scoreboard about eight minutes in, before freshman Hudson Fasching followed suit at about 11 minutes. Fasching then slipped a back pass to junior Kyle Rau at about 16 minutes to seal the trifecta.

“We’ve played together for most of the year,” Warning said of the line’s chemistry. “We kind of know where each other [is] on the ice.”

“The bottom line is: The guys that we needed to score scored goals tonight,” he said.

And while the Nittany Lions are the newest team in the conference, Lucia said he was impressed with their performance over the weekend.

“Penn State’s building a program, and they’re doing it the right way,” he said. “They keep coming from start to finish.”