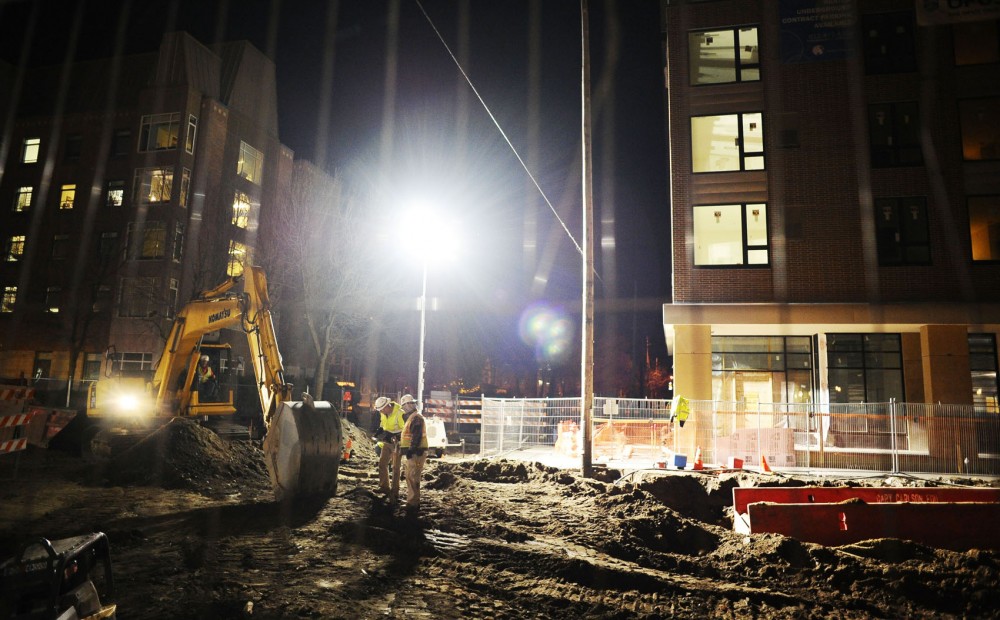 Construction workers continue work on the Central Corridor light rail line late into the night at the intersection of Washington Avenue and Ontario Street South East.

Overnight light-rail construction in Stadium Village has raised complaints from some residents, but is scheduled to end this weekend.

A late-night permit for construction on Washington Avenue between Oak Street and Huron Boulevard expires on Saturday. A project spokeswoman said she doesn’t expect another extended-hours permit to be filed.

Regular Minneapolis construction hours are from 7 a.m. to 6 p.m. The permit allows workers to continue construction up to midnight.

With the permit, city workers can inspect the progress and construction workers can prepare for the next day until 2 a.m.

He said the University requested limited construction on a series of dates, including mid-May because of finals.

“That’s what we wanted them to wait through … to start that heavy work,” he said.

The bulk of the work is relocating public utilities below the area where the tracks will be built, said Laura Baenen, a spokeswoman for the project.

Baenen said the project is on schedule, but to get “most of it done during the summer means that there has to be some overnight work.”

While postponing the overnight construction meant less disruption during the school year, it has inconvenienced some tenants in the Dinnaken House, an apartment complex on Washington Avenue by the construction.

“They basically have no respect for any noise violations because they have the permit to work through the night so they really don’t worry about it,” said Paul Westhoff, a University student and resident at Dinnaken.

“They just pound and you can feel it all the way through the building.”

Westhoff said the beeping noise from trucks backing up and the exhaust and fumes from the site that blew in through his windows forced him to keep his windows closed.

Nancy Rose Pribyl, manager of Dinnaken Properties, has received a number of noise complaints from tenants.

She said she tells students to contact the project hotline directly with concerns.

“I think it’s really important to hear from the people that are paying rent and living down here and how they’re being impacted,” Pribyl said.

The hotline has received complaints about the overnight work, Baenen said.

Westhoff said he never called the hotline or talked to Pribyl.

“I figured it wasn’t worth my time,” he said.

“I don’t think anything’s gotten dramatically worse,” he said. “You know, from our standpoint, the quicker they get [it] done, the better. I would say, ‘Work all night.’”

Utility work should be completed next week, said Deborah Ely-Lawrence, a spokeswoman for the project. The road will then be grated and paved.